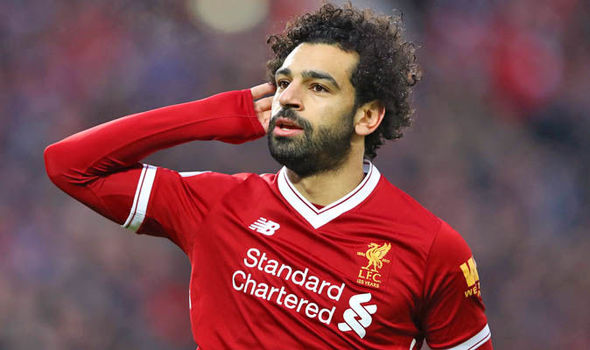 Mohammed Salah has been cleared to play in Liverpool’s two title crunches with Arsenal and Manchester City.

Liverpool’s Egyptian superstar faced a potential two-match ban for his penalty box tumble in the 4-0 win over Newcastle.

Salah threw his arms in the air and crumpled to the floor after a flick on his arm from Toon defender Paul Dummett.

Salah would have faced an automatic two-game suspension if he had been found guilty of conning the referee.

But the FA have decided to take no action after reviewing the footage.

Wembley chiefs have ruled the incident does not meet the threshold in respect of taking action for deception of a match official.

The German claims he did not even know City were playing – let alone that they were losing 2-1 to Leicester when a roar went up at Anfield.

And Klopp has challenged his pace-setters to keep their title dreams alive to clinch their first league title since the 1989-90 season, but warned that he expects it to go down to the wire.

When quizzed about his side wiping out City’s superior goal difference, Klopp said: “That means nothing.

“We play Arsenal and City. I had no idea how any other teams were playing, I didn’t even know where they were playing.

“Afterwards I got the results and I can say it didn’t do a lot for me. It is just information.

“It’s good that we have six points than other teams, or seven, but that is pretty much all.”

He added: “We play City soon – if I was them I would think there is only four points because we still have to play them, then we play Arsenal before then as well.

“The only thing that matters to us is the performance and keeping that level of performance. It’s good but that’s all.

“Tottenham are flying – they had a difficult summer but they are doing brilliant.

“We are on a good run as well. Chelsea will win, Arsenal will win, it will be a race until the final day.

“But we are in it and that’s important. We’re just creating a basis for the rest of the season and the basis after the first part of the season is obviously a good one.”