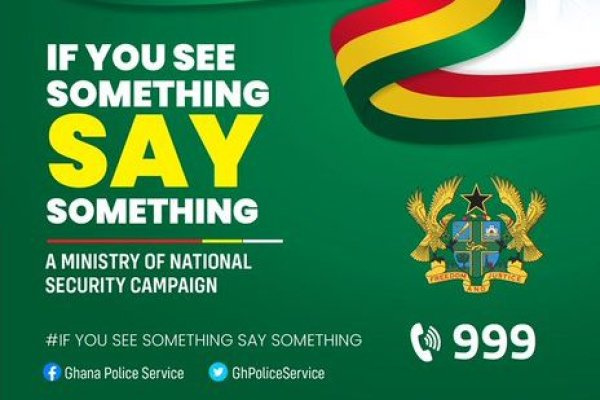 A cross section of residents in the Sunyani Municipality have expressed dissatisfaction about the low publicity being given to the ‘See Something, Say Something’ security alert campaign in the country.

Most of them believed issues of security must be accorded the greatest attention and importance, but that was not seen in the ‘’See Something, Say Something’’ security alert which is geared towards enlightening the Ghanaian public about the insurgence of terrorists in the West African sub-region.

Madam Vida Afful, a trader expressed concern in an interview with the Ghana News Agency (GNA), saying ”this is my first time of hearing such a slogan and I am yet to understand what it means so if you could educate me, I would be grateful”.

In another interview, Mr Martin Agyei, a civil servant said he saw the flyer on social media and that prompted him about the campaign, but since then, he had not heard anything about it.

He said such vital campaigns should constantly be spread across for every citizen to be wellinformed to effectively contribute to its success.

Mrs Augustina Ababio, a government worker told the GNA she first heard about the campaign at her son’s Parent-Teacher Association meeting where they were informed about security threats emerging because of terrorist attacks in some African countries.

She explained the information enlightened her and since then had been alert, but hardly heard other outlets circulating messages about the campaign.

Mr Abraham Yartey, a student also said not much information was being heard about the campaign, saying that utmost importance must be attached to the campaign to avoid a catastrophe.

He said it would be better if more attention was given to the campaign because no one knows where such persons might operate from.