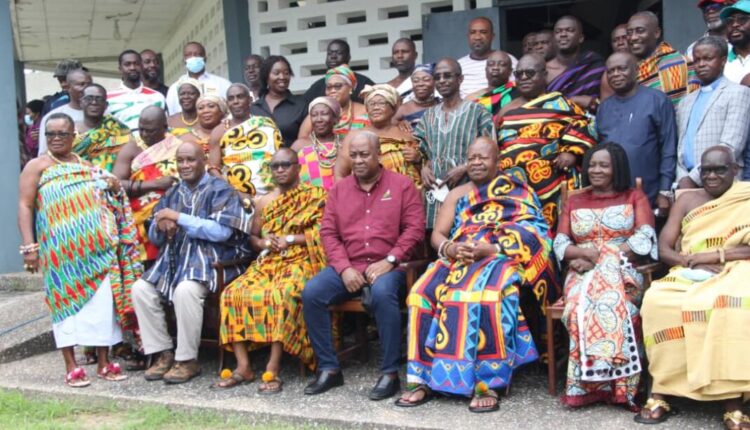 Set up neutral body for electoral reforms – Mahama to EC

The 2020 Presidential candidate of the National Democratic Congress, John Dramani Mahama has called on Ghana’s Electoral Commission to set up a neutral body to review the 2020 Presidential and Parliamentary elections for reforms to enhance credibility and acceptability of future elections.

According to John Dramani Mahama, the 2020 Presidential and Parliamentary election was one of the worst organized elections in the democratic history of Ghana.

“We have identified some of the loopholes that made it possible, some of the things that happened and we are taking steps to ensure these things do not happen again. And so as part of that you might have heard that we have made proposals for electoral reforms which we have presented to authorities.”

He added “It is our hope that the National House of Chiefs and Regional House of Chiefs will join voices with us so that we have an independent review of the proposals that have been brought. In most cases after an election, the electoral commission takes steps to set up a panel to look at some of the issues that went wrong and come out with proposals for making sure we correct them and we expect this electoral Commission must do same”.

According to him, a neutral body must be set up for the electoral reforms.

“They should get a neutral body, a person that we all respect to overseeing the proposals that we all submitted and we can all come to a consensus that we need these changes to make our elections better. That is why we’ve engaged several Institutions, civil society Organizations, we’ve engaged traditional rulers, engaged religious leaders so that we all speak with one voice to allow that process to happen so that our elections can become better than what happened in the past,” Mahama said.

He also called on the Chiefs and clergy to mount pressure on the government to investigate the killing of eight (8) innocent people during the 2020 election and the perpetrators brought to book to avert impunity in the future.

“The sad thing is that for the Ayawaso West Wuoguon, a Commission was set up and recommendations were made including payment of compensation to the victims. We also heard about the killing that took place at Ejura. In that case, too, a commission of inquiry was set up and it has come out with its findings which includes compensating the families of the injured people and those who died,” he said.

“Unfortunately, with those who died during the election, this government is unwilling to even investigate the cause of their death or to do anything in respect of compensating them.”