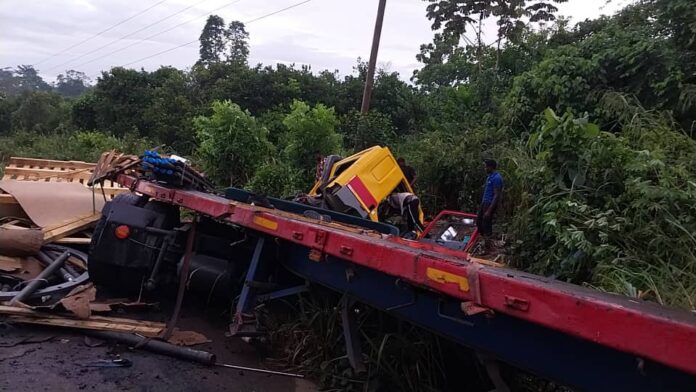 Several passengers are battling for their lives after a collision between a commercial bus carrying passengers and an articulated truck.

The accident occurred around 9:00 pm on Tuesday, 21 June 2022, at Oframase near the Nkawkaw stretch of Accra to Kumasi Highways in the Eastern region.

According to an eyewitness, both vehicles approaching a stationary Rhino truck carrying charcoal in the middle of the road attempted to pass without observing oncoming traffic hence the head-on collision.

Another eyewitness also said the occupants of the bus, particularly those in front seats, were seriously injured.

He said the Police arrived at the scene a few minutes later to extricate and rescue the victims to Holy Family Hospital in Nkawkaw.

Road crashes between January and March 2022

Over the past months, many fatal accidents have occurred in different parts of the country, leading to the loss of hundreds of lives.

The development has sparked a national discussion about the rising spate of fatal crashes, especially on the country’s highways.

A total of 734 persons lost their lives through road crashes between January and March 2022, a Road Traffic Crash and Casualty Situation Report from the Motor Traffic and Transport Department (MTTD) has said.

The report said 4,025 persons also sustained various degrees of injuries through crashes in the same period.

A total of 3,932 crashes were reported, involving 6,587 vehicles and 712 pedestrian knockdowns.

Regarding pedestrian knockdowns, 724 persons were involved in 2021, representing 1.66 percent decrease in 2022.

Out of the total number of vehicles involved in the 2022 crashes, 2,210 were commercial vehicles; 2,948 were private vehicles and 1,429 of them were motorcycles.

The top three regions, which recorded the highest number of crashes are: Greater Accra, Ashanti and Eastern.

Greater Accra recorded 1,661 crashes, representing 42.24 per cent of the total number of crashes.

Savannah, North East and Oti were the three regions that recorded the lowest number of crashes.

The Upper East and Oti regions recorded ten fatalities each (representing 1.36 per cent, respectively), whilst the North East region had 7 fatalities (0.95 per cent).