Dancehall artiste, Shatta Wale’s recent comment describing Ghana as a village has appeared in an exam question at the University of Development Studies (UDS).

The question for Level 200 students on Fundamentals of Human Geography asked the students to state five reasons why the “Gringo” hitmaker described the country as a Village.

With reference to your knowledge about development problems of villages, state five relevant reasons why Shatta Wale described the whole of Ghana as a village,” the question read. 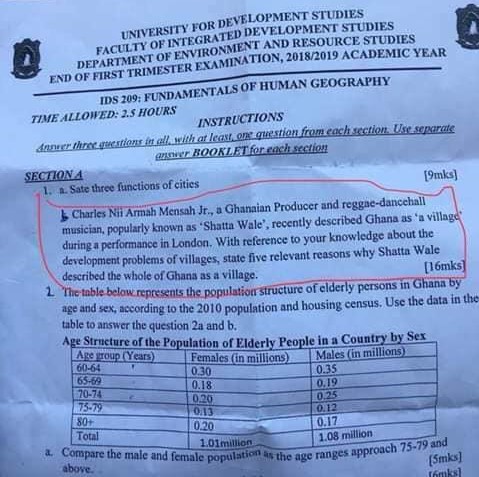 While performing at the Indigo O2 Arena in London, Shatta paused and said “I just wanna share that word with you. Shatta Wale is a very nice guy. All that you keep reading about me on google from Ghana…Ghana is a village, say village, village.”

While some criticized him for painting Ghana in a bad light in a foreign land, there were people who also believed he said the ugly truth about Ghana considering the myriad of problems plaguing the country.