On one of Ghana’s most cosmopolitan streets that comes alive at night, the coronavirus has given it an icy touch of death.

The revellers, the fun and the foreigners – gone from Osu Oxford street in Accra.

But what a lonely visit it turned out to be.

That Saturday, Ghana had recorded 21 coronavirus infections. The president had placed a ban on public gatherings, making a mild exception for businesses of the nightlife.

Thank you, Mr President, but no thanks, patrons of these places appear to say, taking the presidential cue and staying away for their good.

The only conspicuous group of people around the Danquah Circle area were sex workers. But even their trade looked subdued as their numbers on the street looked reduced.

Only sex workers of the defiant strand or the desperate kind were there, advertising their services to ghosts and people aghast at even the thought of a handshake.

The loud music, which blurred from mega speakers every 300 meters, heavy traffic, crowds and the busy Oxford Street, had become the opposite as early as 9:50 pm.

The Bloom Bar was under lock and key. The hundreds of cars that lined-up on Troas Street, Nmetsobu Street and others, preventing the free flow of vehicles, had disappeared.

Security told theghanareport.com that they shut down days after the coronavirus outbreak until further notice. They didn’t even wait for the president to ban public gatherings.

The Kona Café, on Oxford Street, opposite Dynasty Restaurant, had been shut the previous day, we learnt.

An eerie silence, calm, and few human movements had replaced what used to be the order of the day.

Lizzy Spot (Container), also at the intersection of Mission Street and Oxford Street, had eight patrons as the reporter watched Saturday night.

Across the street, Papaye Fast Foods had less than five people instead of an average of 50 at about the same time, on a typical day.

The car park at Frankies was empty as at 10:30 pm; not a single person was at the restaurant. And at their ice cream lounge, only a couple sat by themselves, feeling the sense of protection that love brings.

Sources told the reporter that at the ice cream lounge, “the terrace is usually full at that time, but Friday and Saturday had recorded low patronage.”

On a regular weekend, about 250 customers would have crammed into the ice cream, pastries and cake joint for much of the night – like seven hours straight.

But on a ‘coronavirus night’ like this, that number had taken a nosedive. Only about 50 had been served, theghanareport.com learned.

The restaurant serves about 500 clients daily, but an average of 100 was recorded at the time of the checks.

Breakfast to Breakfast, adjacent Piccadilly Casino, and behind the Trust Hospital, had about nine clients at the restaurant, consuming a variety of meals at about 11 pm.

The situation was different at Kebab King, which had an empty restaurant without clients. The facility had hand sanitizers for clients, but there were no hands to sanitize.

The workers had protective gloves but nobody to protect themselves from. Their protection was complete with nose masks and headgear, all in a bid to ensure food safety.

“As you can see, no customers are here. When there was no coronavirus, people came in their numbers,” a supervisor, Christian Acolatse, told theghanareport.com.

Before the outbreak, Kebab King recorded about 300 clients. The place was filled with romance and a whiff of meaty burgers. It played commercial host to lovey-doveys, and had beautiful girls pointing at shawarmas while their cupid-struck boyfriends pulled out bulky wallets to obey their latest dietary wishes.

But now, Kebab King records “about 80, 90 and 50,” Acolatse cut a figure of a lamenting businessman whose new business model was hope.

The Tip Toe Chinese Restaurant, on Oxford Street, was shut with a notice at the gates saying that they will reopen on May 1. 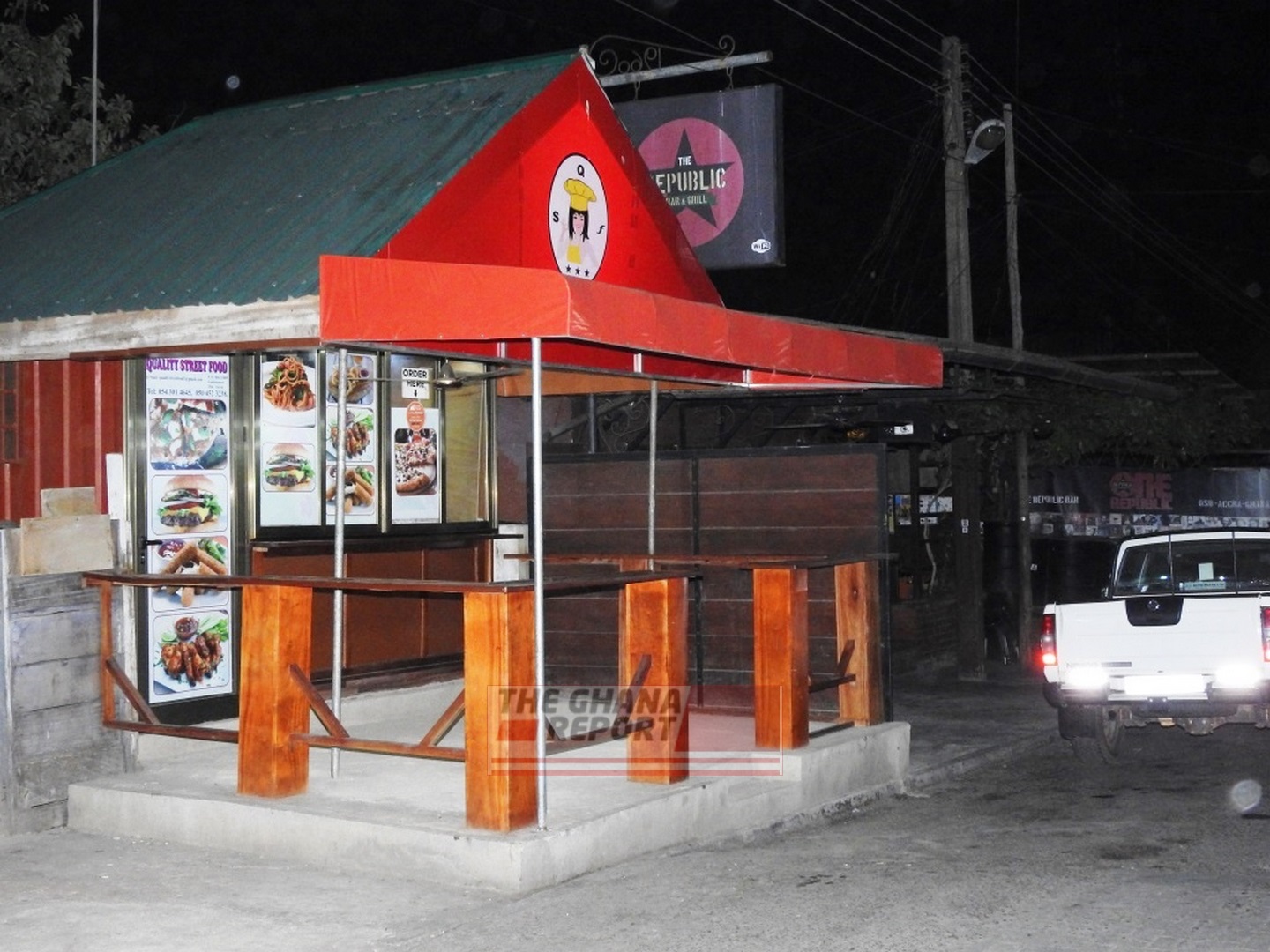 The Republic Bar, a favourite destination for expatriates, was shut down a day after President Akufo-Addo’s travel restriction notice and the adjacent Duncan’s Pub had no soul present at the time of the visit by theghanareport.com. Patrons would have spilled to the streets on an average day.

Down Osu Kuku Hill, Epo had its nightclub closed, with the bar hosting about five patrons in the open space area.  They were spread out in a way which suggested social distancing. On the rooftop, only one couple was spotted with bar attendees having the whole roof to themselves. A hand-washing area and hand sanitizers had been provided at a conspicuous area.

Peripherals such as kebab joints and the Annecks Fast Food was in operation. Crowded areas were depopulated and could become a museum of cosmopolitan life if this trend continues.

At the Magic City Sports Bar at Ako Adjei, the surroundings had a calm atmosphere, and only two clients were inside the bar, presenting the staff with fewer duties.

Management of the facility had instituted measures to protect their customers by insisting on sanitizing, after which you are sprayed with disinfectants from head to toe before entry. 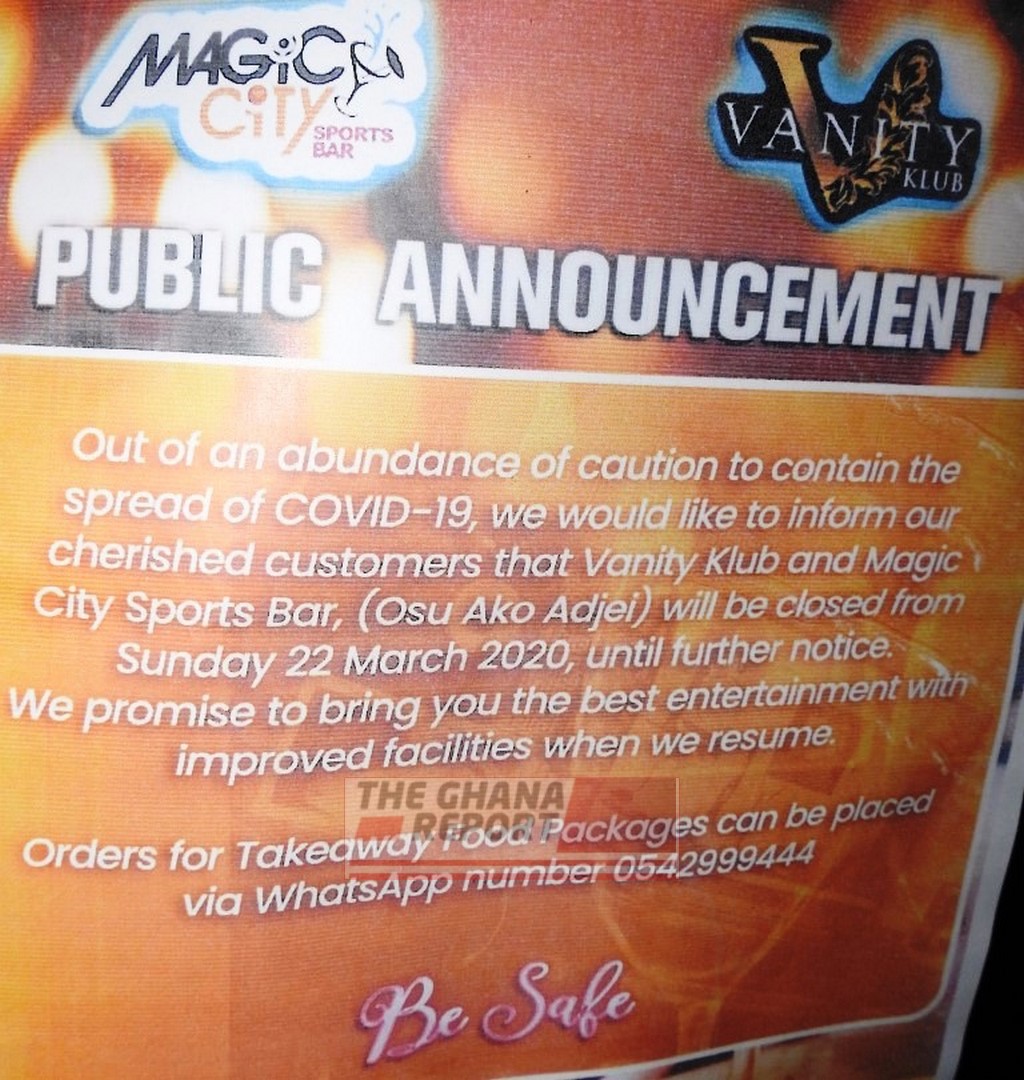 Good as it may be, it did not encourage patronage, and management had announced that they would suspend operations from March 22 until further notice. The staff of 10 will, however, be given full remuneration throughout the closure, the team have been assured.

The Danquah Circle area had the most buzz in the general buzz-lessness. ‘This is Africa Pub’ had quite a few people enjoying alcoholic drinks amidst an atmosphere choked by cigarette smoke. The patrons, however, were just a quarter of the average day turnup, likewise the adjacent Purple Pub.

On this day, the lights which highlighted the counter of the twelve-floor residential apartments by Wondaworld Estates was missing portraying the gloomy picture of the heart of Osu.

But across the building between the Koala Shopping Centre and the Agyeiwaa Heights stood a group of about 10 sex workers lined up on the street which leads to Rabito Clinic. 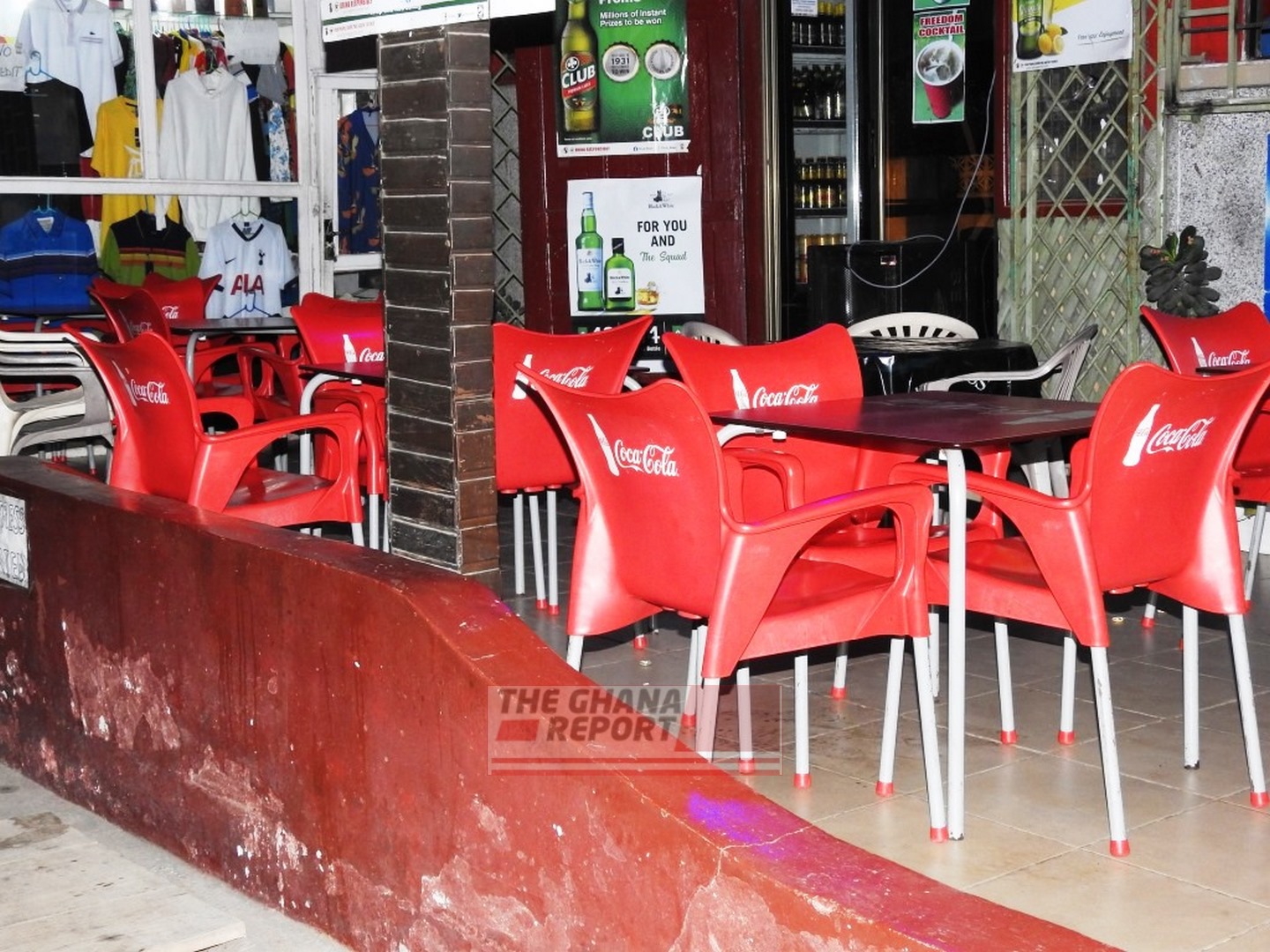 Soliciting sex from men who passed by, they approached their clients without fear of body contact or potential coronavirus spread. None of the ladies interviewed said they had hand sanitizers especially for this kind of work that required holding places that are generally left unheld. 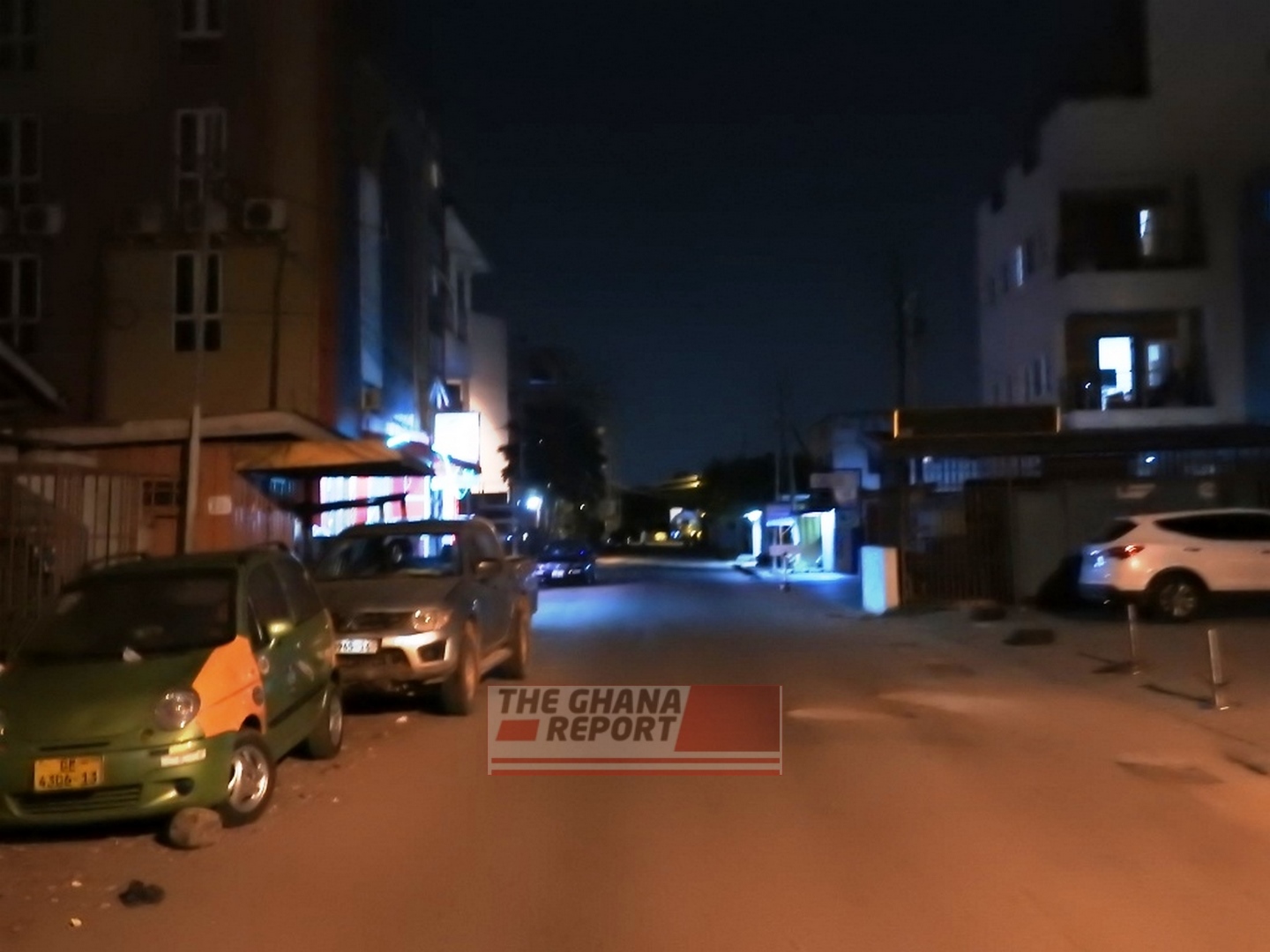 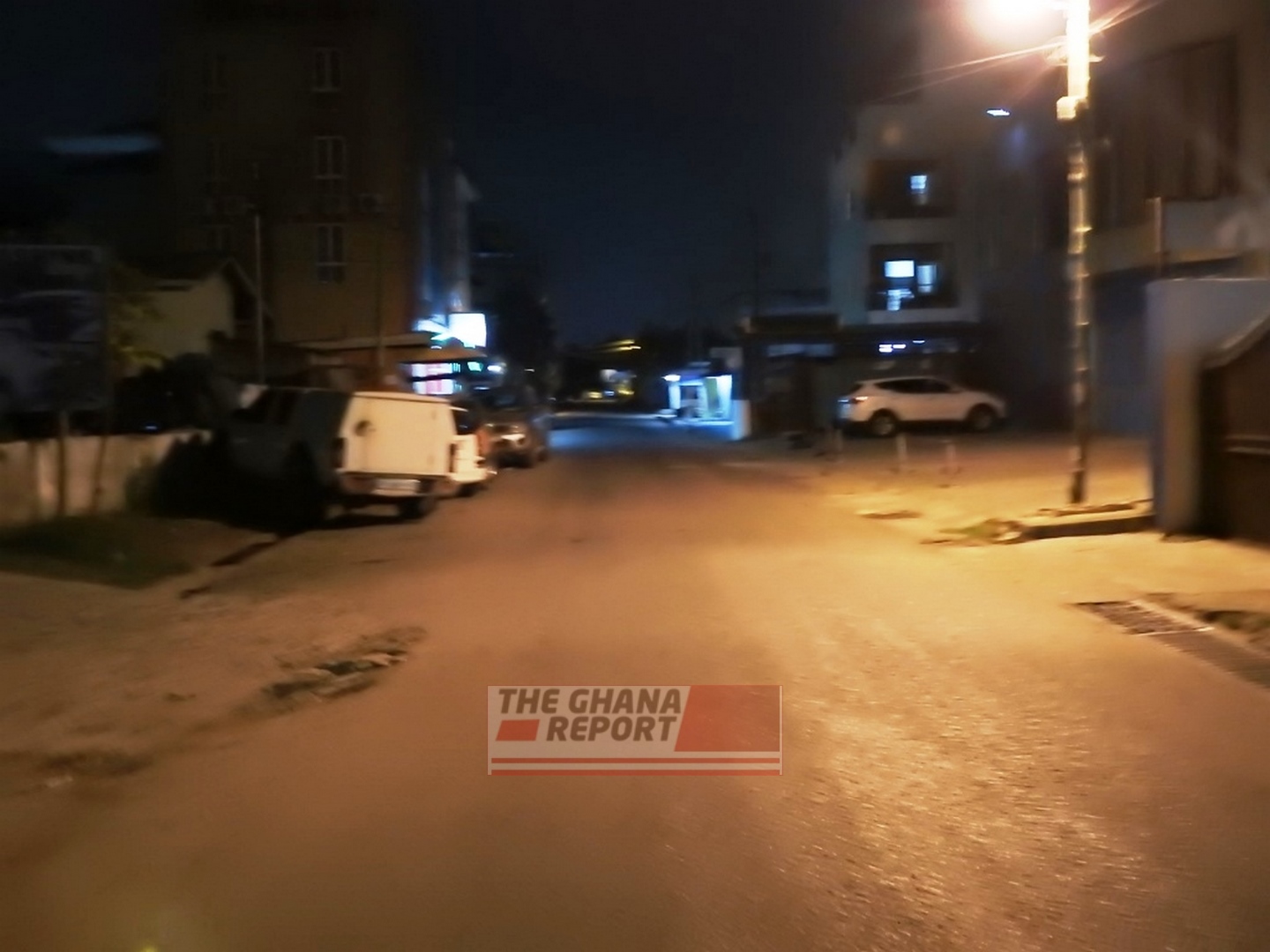 “Hello,” one short, fair lady threw in her opening business line. She walked closer to the street lights towards the reporter.

She was dressed in a brown, tight-fitting straight dress with hair extensions and a necklace hanging low on her cleavage.

After the reporter shared pleasantries, she boldly stated that she lived around. “I take GHC 150 for short, but if you give me GHC 100, I can manage,” she closed her business presentation and waited for a response.

But after learning the reporter’s work at night did not include moaning and screaming, she walked away with experienced steps of disappointment.

Another sex worker stood on one side of the Danquah Circle. Heavy on the bleaches, heavy on the make-up, she wore the trade’s signature dress code – skimpy shorts. But she was oblivious to the coronavirus pandemic.

When our team approached her, she mentioned a price that slashed the earlier offer by a lot. Call it a coronavirus giveaway.

“I am a ‘line girl’, GHC 50 for short and GHC 100 for a night,” she said and revealed an alarming thought that coronavirus was a Sexually Transmitted Infection (STIs).

And to counter it, she carried condoms. Hand sanitizers must be for sissies, then.

But making a point to sensitize the sex worker, the reporter explained to Grace, as she prefers to be called, that coronavirus had killed over 11, 000 with more than 250,000 infections worldwide recently.

A third sex worker, Veronica, she called herself, said she lived in Nungua and did not believe coronavirus had spread to Ghana.

Speaking in Twi, she noted that the dreaded Ebola outbreak a few years ago did not affect Ghana.

This country is set up to survive viruses and viruses don’t go viral here, she gave a thumbs up to her perverted confidence, bothering on perverted patriotism.

Even though she had heard about coronavirus in the news, she described the infections and death in Ghana as “lies”.

For her, “Ghanaians are alarmists.”