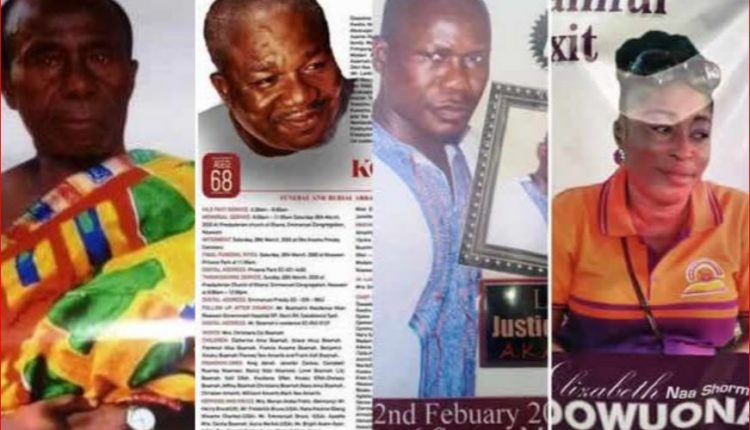 A burial service of no more than 25 people, no handshakes and no hugs or wait for this to pass over and then go gaga on Ghanaian traditional funeral services.

It’s basically take it or leave it.

And so theghanareport.com has completed a special report on how affected families are exercising their bereavement choices.

Henry Nii Lantey Lamptey, the choirmaster in an Anglican church, died at 70 years. He was also an organist and an icon in the church for decades.

For Ms Vivian Hammond, the death of her cousin was a big blow to the family and to the church too.

Back then, when the family sat down to plan for the funeral, coronavirus was running chaos in Italy.

And so when they fixed March 20 for the burial, there wasn’t much fears that things could go awry for them here in Ghana – not much.

The “posters had gone round” and “payment for services made,” she told the reporter.

Then March 12 happened. Ghana recorded a case, the president’s ban on public gathering was in place and things began to unravel quickly.

For a plus 25-member choir that had sung coffins into many graves, it appears unfathomable that their leader and choirmaster should go down in ghastly silence.

The family’s gem cannot be escorted to the underworld without melodious hymns by his large singing group to put his soul to rest.

Ms Lamptey said the family is yet to take the next line of action.

But already, “it has cost us a lot; a fortune,” she lamented.

Nobody saw coronavirus coming. What they saw coming at the time was the Akwasidae festival at Obo Kwahu in the Eastern region.

And so the funeral was delayed to make way for the festival. After chiefs were consulted, the burial was scheduled for March 28–three months after the pensioner died.

Gillman & Abbey Funeral Service, one of the oldest and reputable funeral handlers, were contracted to deliver an excellent service.

Thomas Yaw Amanfo, son of the deceased, told theghanareport.com, “We were done with all preparations and waiting for the day but…”

From November to March alone, he said they spent over GHS 4,000 on the preservation of the remains at a private morgue. The casket, pallbearers, hearse and other funeral services had cost about GHS10,000.

With the funeral twice delayed by a festival and a fiery pandemic, Mr. Amanfo said the family will consider a private burial and later organise a funeral for the late pensioner. 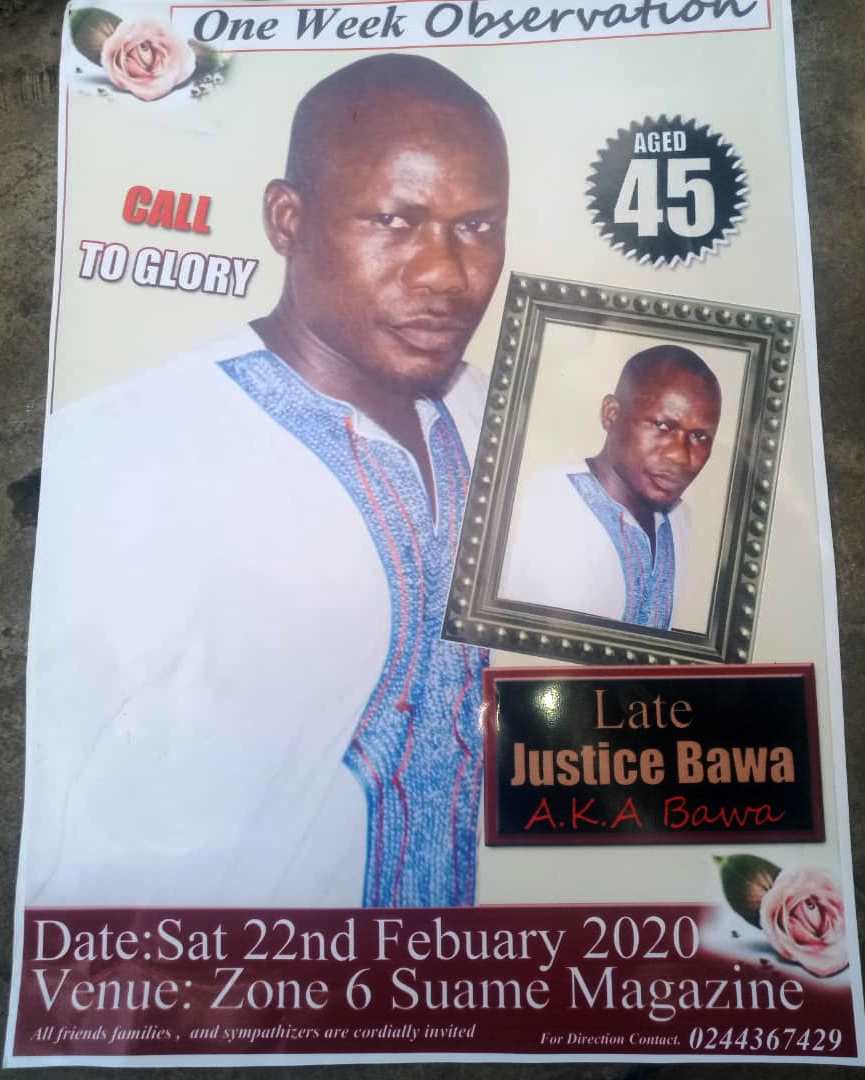 Justice Bawa had a welding shop in the famed Suame Magazine in the Ashanti region. After feeling a backache at work, he suddenly collapsed. He remained hospitalized for three days and died on February 15, 2020.

The funeral was fixed for April 4.

Private burial was out of the question because of the number of sympathizers expected and the family had to seek funds to make all necessary arrangements.

“How can you have a funeral with 25 people?” her sister, Ms Florence Sanya found it difficult to contemplate this option.

She said she had taken several days off from work and her friends had made preparations to travel for the ceremony. She was worried that the situation had placed pressure and a burden on their mother.

The elders of the family want the remains transported to Wa in the Upper West Region so Baba can be buried next to his father’s grave.

Ms Sanya indicated that family heads will have to decide on the next line of action if restrictions on movement persist.

The family with a deadline

“If by the end of April, the lockdown is still in force, we will have to just bury him and then the funeral will be held later” Samuel Oduro said of his father, Agya Oppong.

Agya Oppong passed away in February in Nkwakaw at age 85 after a recurring illness.

They planned to bury their patriarch on March 28, but the restrictions and lockdown compelled them to cancel and postpone indefinitely. 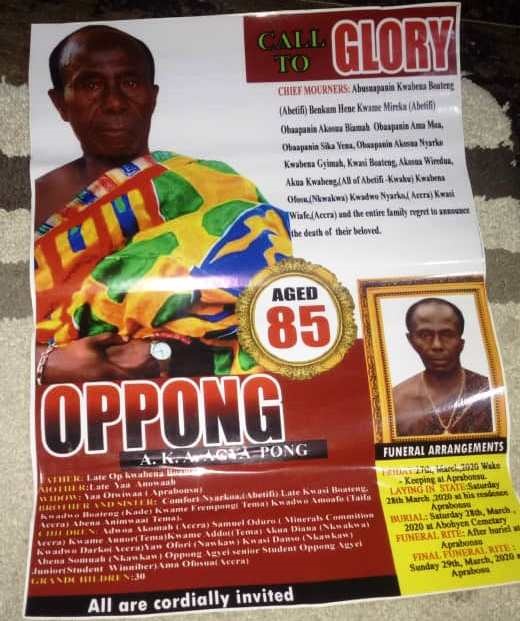 “It has become a cost already, and the lockdown has made it worse,” he narrated.

“It has become a cost already, and the lockdown has made it worse,” he narrated. “If by the end of April, the lockdown is still in force, we will have to just bury him and then the funeral will be held later.”

Will coronavirus be over by May?

In the heart of Osu, the Dowuona Family are unsure if their beloved deceased Elizabeth Dowuona will be buried at the Osu Cemetery on May 2.

They have confirmed the funeral date, but current developments mean their plans are hanging in the balance.

Under the current circumstances, the family will have a burial with the 25 persons cap if the 37 Military Hospital Morgue permits collection of the remains.

“Later, when everything is okay and back to normal, we will plan and hold a memorial service,” sister of the deceased, Priscilla Dowuona, told theghanareport.com

Their challenge is the difficulty in getting items needed for the preparation of the funeral and the corpse because all shops are shut to observe the lockdown.

In the wake of the coronavirus pandemic, previously unthinkable burial options are being explored in Europe.

The family’s son, Robert Nartey, 40, passed away on March 23 after a short illness.
Unfortunately, the lockdown has made it impossible for the family to meet officially to discuss how to pay their last respects to the fallen member.

A sister of the deceased Mrs Rita Ofori explained that the body is being preserved in the mortuary and the majority of family members have been unable to view the corpse.

“We couldn’t even sit to plan because of the lockdown,” she lamented, adding that the family communicated via phone.

“From the way things are going, we could bury him first and later meet and do the funeral later,” she disclosed.

There have been mass burials in New York, US and in Iran while families that would otherwise not consider cremation have done so.

Several families have lost their loved ones without a chance to say goodbye. In Ghana, infections have exceeded 500 in exactly one month since the first case was recorded on March 12.

The cases were confirmed as a result of increased testing by the government. Only eight deaths have been recorded, the most prominent being the death of a Ghanaian doctor and surgeon.

In its next special report, theghanareport.com looks at how mortuaries and burial service providers are coping in coronavirus times.

Are mortuaries full already? What is happening at the cemeteries? Stay with us.