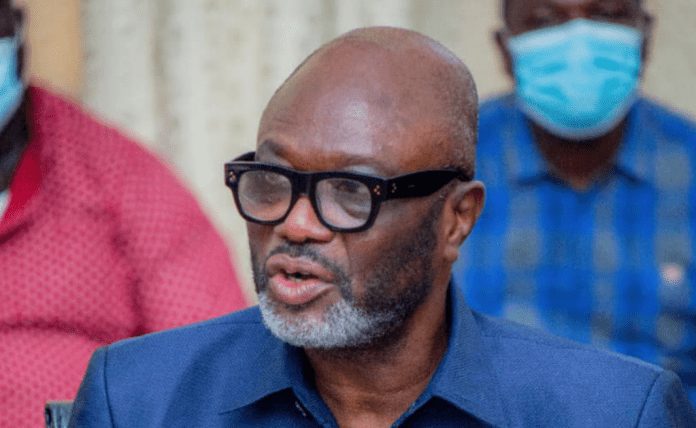 The President of the Ghana Union of Traders Association (GUTA), Dr. Joseph Obeng, the West African Regional Director of CUTS International, Mr. Appiah Kusi-Adomako and the Executive Director of the EXIM Frozen Foods Association, Ghana, Michael Obiri-Agyei are among those who disagree with the new policy indicating Bank of Ghana’s withdrawal of forex support for the importation for selected products identified as non-critical.

The Central Bank will no longer provide forex support for the import of rice, poultry, vegetable oils, toothpicks, pasta, fruit juice, bottled water, ceramic tiles among a few others.

This policy has been viewed as one of the strategies government is taking as part of measures to fight the cedi depreciation, following the President Nana Addo’s address to the general public on the nation’s economic crisis.

Touching on the subject on the Eye on Port program, the GUTA President, the West African Director of CUTS International and the EXIM Frozen Foods Association, Ghana, all acknowledged the wisdom behind the policy, but described it as rush, lacking enough stakeholder consultation and an effective contingency plan.

“I believe as a country we cannot forever import everything we need as a country, however if you want to stop the dependence of imports, you need to have the relevant capacity to produce to meet the local demand and export. As it stands now, our total demand doesn’t match our local capacity to produce. There is a deficit,” Mr. Appiah Kusi Adomako opined.

He explained that the withdrawal of forex support can lead to shortage of food, because without forex support, importers will be unable to bring in essential food products, and Ghana is not self-sufficient yet when it comes to feeding all its people.

“Already the cedi has been battered by the raging storms of depreciation and the economy staggered by inflation. So if we allow this BOG measures to stick, we are going to create more problems. They need to look at the welfare implications on household, commodities are expensive and people don’t earn nearly enough. Things will get worse when there is scarcity,” Mr. Adomako added.

He said while such a policy will bring long term benefits such as strengthen the cedi, create jobs and grow local industries, without an effective strategy in place, the policy could worsen the economic crisis.

The West African Regional Director of CUTS International said the Bank of Ghana will have to liaise with other key institutions such as the Ministry of Food and Agriculture, the Statistical Service in the decision making process for such a drastic policy.

He explained that such an approach will have to be data driven and all-encompassing to ascertain Ghana’s readiness to implement such a policy.

Similarly, he said government should come up with an effective and timely contingency plan that will make up for the production deficit.

“For example when you come to the rice production sector, government can look at providing subsidized loans to go into massive rice production for a period, and ban rice importation after. That is a policy backed by action. As of now, none of that has been done.”

The Executive Director of the EXIM Frozen Foods Association, Ghana, Michael Obiri-Agyei said this is an example of a policy intended for good but not carefully thought through.

He said the government or the Bank of Ghana did not hold extensive consultation with stakeholders to help appreciate the wisdom behind the directive and also help them plan ahead.

“This is not the solution that we need right now. Take somebody who has imported frozen goods.
Such a person has already engaged his suppliers to export to him. Prior to engaging the supplier, he was relying on the forex with the assistance of the Bank of Ghana to pay the supplier. How do you expect him to survive? When you do these things, you cripple people doing legitimate business in your country. You make people unable to thrive in the business they have chosen to do. When you restrict them from accessing forex, you might as well tell them to close their businesses” he lamented.

According to the panelists, the directive will cause traders to engage in desperate methods including smuggling and patronizing the black market.

“You do not expect that when you restrict people from gaining access to forex, you will solve the problem. What you will do is that you will open us up to a black market that cannot be controlled. Others may also decide to import through Togo and smuggle the goods into the system.
The FDA is unable to regulate what we consume; government is unable to collect taxes” Mr. Obiri-Agyei articulated.

“The moment Bank of Ghana announced this directive, we knew it was the beginning of the greater challenges that we are going to have because people might begin hoarding, demand will rise and pressure will be placed on these imported goods and prices will hike,” GUTA President, Dr. Obeng added.

The President of the Ghana Union of Traders Association like his fellow panelists, expressed admiration for the nation’s aspirations for self-sufficiency, but he said that cannot be done without proper preparation.

He said, for a long time, traders were blamed for the cedi depreciation for excessive importation.

Dr. Obeng emphasized that Ghanaian traders are open to sourcing goods locally, but only if Ghana can produce at same capacity, standard quality and at competitive prices.

He said, he believes government should take a measured approach in trying to discontinue the importation of these commodities.

“We have always been of the opinion that local production should be promoted side by side with importation,” he expressed.