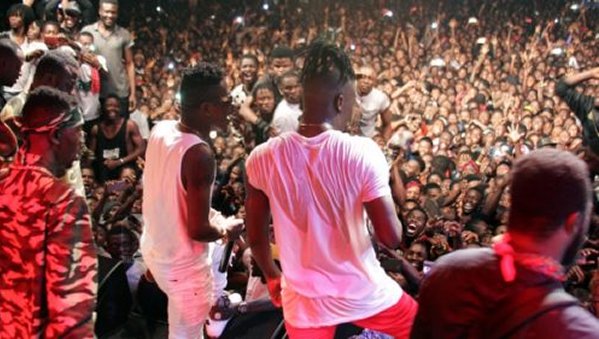 Stonebwoy and Shatta Wale light up ‘Ashaiman to the World’ concert

The 2019 Ashaiman to the World concert would forever be recorded in history as the first night two rivals turned friends performed together on one stage.

Stonebwoy at his sixth Ashaiman to the World treated fans to an incredible sight when he invited Shatta Wale to perform with him on stage.

Ever since the two got together after the Vodaphone Ghana Music Awards fall out, fans have been expecting a concert to be organised in their names in anticipation of seeing the two cement their friendship.

That was exactly what happened when the one-time rival dancehall artistes performed alongside each other on Saturday.

After climbing the stage to join the ‘Top Shanka’ hitmaker, Shatta Wale hugged his colleague to seal the peace that has prevailed between them for some time now.

The duo then went ahead to thrill fans with one of the best great performance patrons might have seen on the night.