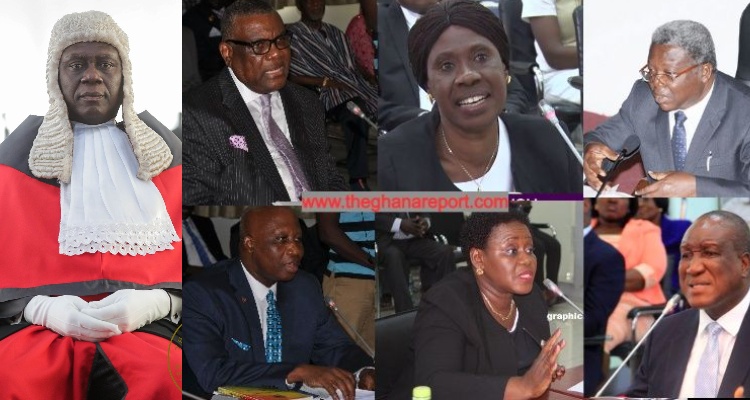 A seven-member panel has dismissed an application by the flagbearer of the NDC that sought to order the Electoral Commission to specifically respond to questions regarding anomalies that characterised the December 7, 2020 elections.

In a unanimous decision, on the preliminary issue, the apex court presided over by the Chief Justice Kwasi Anin Yeboah said the court rules had been amended with respect to interrogatories.

The Chief Justice said the new regime did not afford the court the laxity of time to respond to allow such questions to be answered before the trial begins.

“Indeed, Rule 69 of the Supreme Court amendment in C.I. 99 directs the expeditious disposal of petitions and sets timeliness for this court to dispose off the petition. The amendments provides us [court] with new procedural regime and strict timelines.

“We are strictly bound to comply with C.I. 90 and therefore we will not apply Order 22 of C.I. 45 of 2004 in this circumstances. We, accordingly, refuse to grant the application and same is accordingly dismissed,” the court said.

It was the case of the apex court that the petitioners simply wanted to delay the process.

The apex court’s decision comes after Counsel for the petitioner, Tsatsu Tsikata filed an application that required the EC boss Jean Mensa to respond to 12 key questions they claim would help project the errors made by Ghana’s Electoral body.

The review of the Election Adjudication process makes it clear that the apex court has a maximum of 42 days to determine presidential election disputes.

Earlier, opposing Mr Tsikata’s arguments in support of the application for interrogatories, counsel for the EC, Justin Amenuvor, shot down Mr Tsikata’s request.

He insisted that the answers the petitioners sought were in the pleadings the EC filed.

He asserted that on election day, Mr Mahama had at least two agents at the more than 38,000 polling stations nationwide.

“Then the presidential returning officer [Jean Mensa] got all these sheets. The petitioner’s own agents signed 13 of them. The second respondent’s [Akufo-Addo] signed 14 of them. Some of the 12 other agents signed. There are no signatures on all the 16.

But a judge on the panel drew the attention of Mr Amenuvor to a similar application by Nana Akufo-Addo in the 2012 election petition which the court granted.

“This is a similar application for interrogatories which is before us. This is being used as a precedent. Counsel is entitled to rely on precedents and invite the court to follow precedents.”

But Mr Amenuvor fired back saying “it should be distinguishable precedents. The 2013 situation is different. The interrogatories granted or refused is discretionary.  It has to be based on the set of facts and the processes.”. It doesn’t arise in this case.”

According to him all the answers Mr Tsikata’s sought were all in documents before the courts and the “law they relied on are there. The point about when the regional collation came up are all there in the law.”

‘You have no question to answer’

When counsel for President Akufo-Addo, Akoto Ampaw took his turn, he sought to respond to the questions but the Chief Justice Kwasi Anin Yeboah, who is the presiding judge, stopped him in his track, insisting that he had no question to answer as the petitioners had directed their questions at the EC.

But Mr Ampaw had a say.

“My Lord, it is true that no specific interrogatory has been directed to the second respondent. However, we are an interested party in this matter. If we can assist the court on legal issues, we think should be permitted to do so.”

But Justice Yaw Appau pointed out that Mr Ampaw could only be allowed to speak if his arguments were about legal points that could assist the court.

With the right to speak now conditional, Mr Ampaw said “interrogatories must relate to matters in contention between the parties and it was clearly set out in the court rules.

He said per the court rules, proposed interrogatories which did not relate to the matter should be disallowed notwithstanding the fact that the issues raised could be admitted during cross-examination.

“It is a well-established rule of the common law that a matter that may be refused in interrogatories may be allowed during cross-examination.

“All the issues they are raising here, if you look at the pleadings, they are not in contention. They have been sufficiently answered,” he pointed out.

Meanwhile, the Supreme Court has adjourned the case to Wednesday, January 20 to allow for case management procedure.

During case management conference, parties together with the court agree on the timetable and procedure for the hearing.  They may also settle preliminary issues or narrow the issues to be heard by the court.