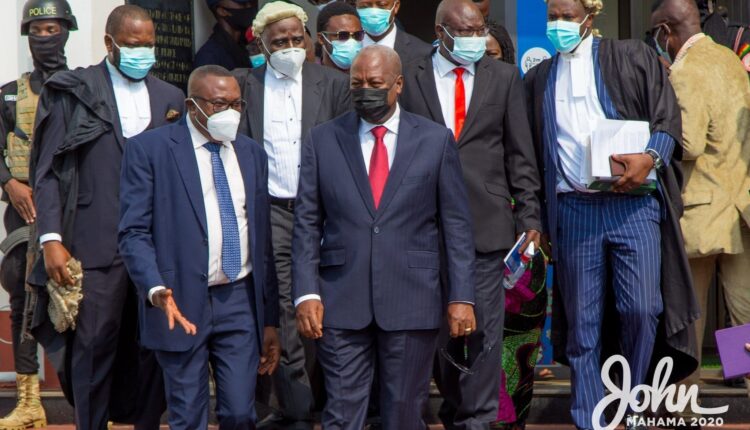 The Supreme Court will today hear another review application of John Dramani Mahama, challenging the decision of the Court to have his case reopened in the ongoing Election 2020 petition trial.

The court will also consider the closing arguments from all parties after the petitioner’s legal team led by Tsatsu Tsikata filed the application on Saturday, insisting that the court should grant them an audience to reopen the case.

Explaining the need for reopening, Counsel for Mr Mahama said he was surprised when the respondents (Electoral Commission and Nana Akufo-Addo) announced the closure of their case.

Mr Tsikata said the petitioner’s team had been assured of the respondent’s witnesses mounting the witness box as stated earlier in sworn affidavits.

He wants the court to treat the EC Chairperson Jean Mensa as a hostile witness.

A hostile witness, also known as an adverse witness or an unfavourable witness, is a witness whose testimony on direct examination is either openly antagonistic or appears to be contrary to the legal position of the party who called the witness.

Making a case for reopening, Mr Tsikata reiterated that the petitioner closed his case because the EC Chairperson, in her affidavit, had assured the court that she would make herself available for cross-examination.

He pointed out that assurance led to the dismissal of the petitioner’s interrogatories application, which sought to ask the EC Chairperson 12 key questions it claimed were critical to the case.

“The Chairperson of the first respondent has in affidavit made clear that the petitioner will in no way be prejudiced because the questions that the petitioner sought to have in interrogatories those will be subject matter in cross-examination,” Mr Tsikata explained.

Two additional justices would be added to the panel, expanding the total to nine for the case.

In a unanimous decision, the Supreme Court tossed out the request to allow the petitioner John Dramani Mahama in the ongoing election petition re-open his case.

Among other things, the seven-member panel presided over by Chief Justice said the petitioner’s legal team had not demonstrated any new evidence in its argument for re-opening.

The court also maintained that the plaintiff or petitioner (John Mahama) must not rely on the respondents’ evidence (Electoral Commission and Nana Akufo-Addo) as its strength.

Justice Anin Yeboah reiterated that the team have also not furnished the court with the new evidence it wishes to bring to bear through the EC Chairperson’s testimony.