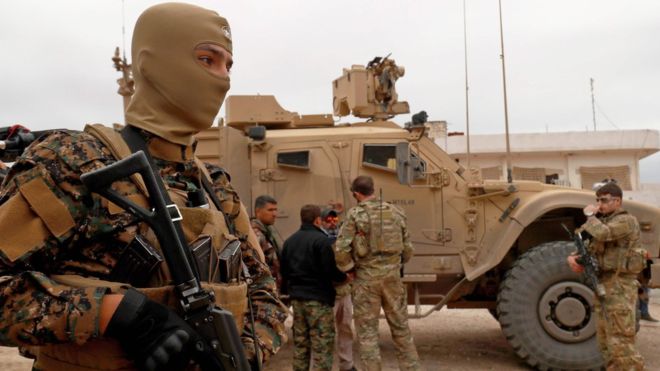 The White House has confirmed US troops are being withdrawn from Syria, after President Trump said the Islamic State (IS) group had been “defeated” there.

Some 2,000 troops have helped rid much of north-eastern Syria of IS, but pockets of fighters remain.

It is thought defence officials wanted to maintain a US presence to ensure IS did not rebuild.

There are also fears it will cede influence in Syria and the wider region to Russia and Iran.

The statement from Ms Sanders said: “We have started returning United States troops home as we transition to the next phase of this campaign”.

She did not give details of what that campaign might be, but said the US and its allies stood “ready to re-engage at all levels to defend American interests whenever necessary, and we will continue to work together to deny radical Islamist terrorists territory, funding, support and any means of infiltrating our borders”.

We have defeated ISIS in Syria, my only reason for being there during the Trump Presidency.

The Pentagon has so far refused to comment, but Republican Senator Lindsey Graham, who sits on the armed services committee, called it a “huge Obama-like mistake”.

Just a few days ago, Brett McGurk, Mr Trump’s special presidential envoy for the global coalition to defeat IS, suggested American troops were not going anywhere. “Nobody is saying that [IS fighters] are going to disappear. Nobody is that naive. So we want to stay on the ground and make sure that stability can be maintained in these areas,” he said.

But President Trump promised earlier this year that US troops would leave Syria “very soon”.

The confirmation of the withdrawal comes after Turkey said it was preparing to launch an operation against a US-backed Kurdish militia in northern Syria, something that risks confrontation with the US.