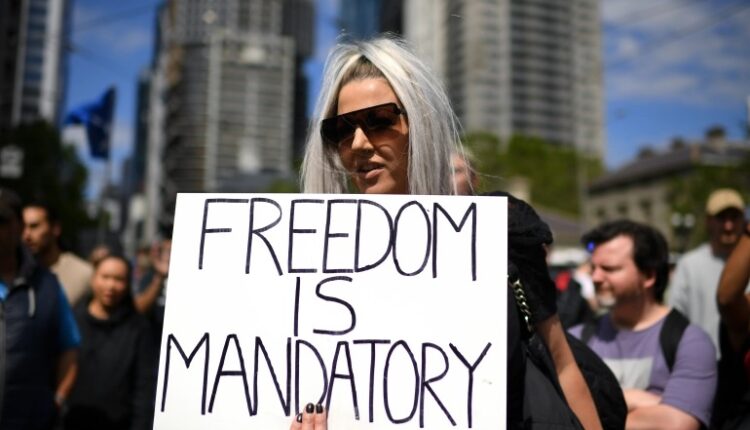 Several thousand people took to Australia’s streets on Saturday in protest against COVID-19 vaccination mandates, while smaller crowds gathered to support the measures that have elevated the country to be one of the most inoculated in the world.

Nearly 85 percent of Australians aged 16 and above have been fully vaccinated against the coronavirus as of November 19. While nationwide vaccinations are voluntary, states and territories have mandated vaccinations for many occupations and barred the unvaccinated from activities such as dining out and concerts.

There were also protests in Sydney, Brisbane and Perth, with police watching the rallies closely and no immediate reports of unruly behaviour.

“There are concerns among parts of the community about some pandemic management legislation that the state government is currently trying to pass through the upper house of parliament,” said Morse, who is based in Melbourne.

“That bill has stalled, but people are concerned about the amount of power that the state government will have if the bill passes.”

People are also protesting the “no jab no job” laws which mean people who are currently not vaccinated will not be able to continue working, she added.

The anti-vaccination demonstrations have been going on for weeks in Australia, becoming occasionally violent and attracting loose groups of citizens, as well as supporters of conspiracy theories and the far-right.

The anti-vaccination movement, however, remains small, with polls showing nationwide opposition in the single digits.

“We’re looking at a country that on the whole believes in the safety and efficacy of the vaccines when it comes to treating COVID-19,” Morse said.

“Even when you’re looking at protests of tens of thousands of people like we saw on the streets of Melbourne today – which is a city of five million people – we’re still talking about a minority but very vocal part of the population,” she said, referring to the protesters who were against the jabs.

A counter-rally of several hundred took place in Melbourne, organised by the Campaign Against Racism & Fascism group under the slogan of “Don’t scab, get the jab”.

One of the anti-fascist rally organisers, Nahui Jimenez, told the Australian Broadcasting Corporation (ABC) the demonstration was “a message of solidarity” with the country’s health workers.

“The majority of people support these health measures which actually have helped millions of people not get COVID,” she said.

The chief of the Australia Open tournament, the year’s first Grand Slam tennis tournament and one of Australia’s biggest sporting events, said on Saturday, that all players will have to be vaccinated to compete in the event, which takes place in Melbourne.

On Saturday, there were 1,166 new COVID-19 cases in the state of Victoria, where Melbourne is the capital. Five more people died. The most populous state of New South Wales, where nearly 92 percent of people are fully vaccinated, reported 182 new cases.

Despite the Delta outbreaks that led to months of lockdown in Sydney and Melbourne, Australia has had only about 760 confirmed cases and 7.5 deaths per 100,000 people, according to data from the World Health Organization, far lower than many other developed nations. The United Kingdom, for example, has had more than 14,000 confirmed cases and 211 deaths per 100,000 people.

Neighbouring New Zealand, which is also learning to live with the coronavirus through high vaccination rates, reported 172 new cases. As of Friday, 83 percent of the Pacific nation’s population have been fully vaccinated.