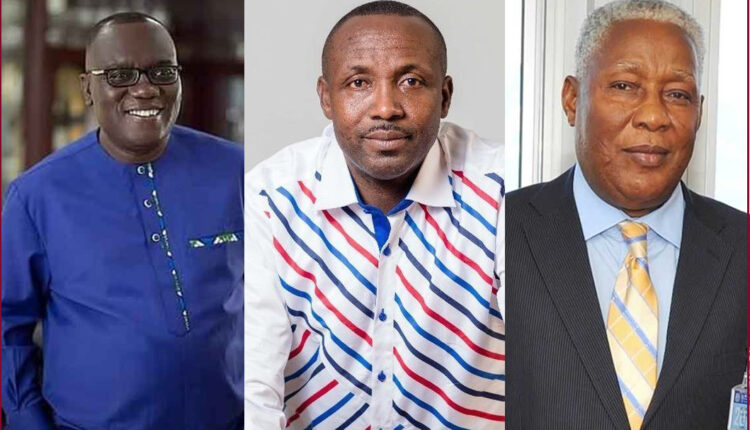 Top 6 Ghanaian politicians who were shockingly defeated by underdogs

This phrase will continuously ring loudly in John Boadu’s head after he was cut to size on the night he was confident of leading the governing NPP as General Secretary into the 2024 elections.

‘Adwenkese’, as he is popularly known within party circles, had steered the affairs of the party in that same position for the last seven years.

However, disappointment was written all over his gloomy face as he slumped in a chair after a shocking blow at the Accra Sports Stadium.

Campaigns and elections in Ghana have produced dramatic outcomes and even get more interesting after the declaration of results, whether in presidential, parliamentary, or political party polls.

For the winners and their supporters, it is week-long celebrations, while the losers sometimes go into hiding. Losing an election may be painful, but the pain is elevated to abnormal levels depending on who defeated you.

It often becomes a shocker when a known face loses to a newbie. John Boadu is not the first, nor will he be the last.

In the aftermath of the NPP delegates conference, The Ghana Report looks at political bigwigs in the same league as John Boadu, who have suffered defeats to longshots.

The immediate past General Secretary of the New Patriotic Party (NPP) is the talk of the town over his defeat at the just-ended National Delegates Conference held in Accra.

JB is one of the few loyal members of NPP and held numerous positions in the party like no other.

Having served as the interim General Secretary in 2015 after the suspension of the then incumbent, Kwabena Agyapong, he was elected a substantive to continue in 2018.

He again went toe-to-toe this year with five other candidates in a hotly contested race for the enviable position.

However, the newbie Justin Frimpong Koduah (JFK) carried the day to the dismay of many.

Mr. Boadu went into the elections touting his experience as the sure bet to help the party ‘break the eight’. He combed the corners of the country campaigning, hoping to win the hearts of the delegates.

Being the most popular among the candidates, the incumbent General Secretary seemed to be the obvious choice.

After leading the NPP  to two consecutive presidential victories and with the support of 15 out of 16 regional chairpersons of the party, his success was almost assured but received a sucker punch on election day.

The late Kwadwo Owusu Afriyie, popularly known as Sir John, suffered the same fate as John Boadu some eight years ago when NPP held their National Delegates Conference at Tamale.

Sir John, who served as the General Secretary of the NPP from 2010 to 2014, suffered a shocking defeat to Kwabena Agyei Agyapong in his bid to secure a second term.

He did not hide his shock and disappointment in the results after he obtained 1,960 of the votes against Agyapong’s 2,520.

Speaking to the media after the painful defeat, he coined the term, “Fear delegates, not ghosts”.

This was his version of the famous Ghanaian saying, “fear humans and not ghosts”.

That phrase has become a mantra after every election in the country.

To him, there was no greater betrayal than what the delegates did to him.

Daniel Bugri Naabu, a former Northern Regional Chairman of the NPP, lost his bid to retain his position to businessman Alhaji Mohammed Baantima Samba in 2018.

Mr. Naabu, a very outspoken politician, contested for the northern regional chairman position of the party in 2010 but lost to Haruna Tia Sulemana.

He contested again in 2014 and won to become the Northern Regional Chairman of the NPP.

Before his waterloo, ‘Chairman Bulldozer’, as he was known, accused Mr. Samba of vote buying in a letter he addressed to the president, Nana Akufo-Addo.

He also said some of the aspirants had no good intentions for the party in the region and must not be considered for election.

The incumbent chairman had stated that history would repeat itself as he would again be declared the winner.

‘Chairman Bulldozer’ was often involved in feuds with others in his party and the NDC, which made him immensely popular in the country.

The popularity could not save him from the painful defeat.

The former Member of Parliament (MP) for Ningo-Prampram, Enoch Teye Mensah, represented his constituents from 1997 to 2017.

In what was dubbed the ‘David and Goliath fight’, Mr. Mensah suffered an awful defeat.

He was one of the longest-serving parliamentarians until he lost the NDC primaries in 2015 to his protege, Sam Nartey George, a novice.

Sam George polled 63.4%  of the votes, while the senior lawmaker garnered only 36.5% in an election characterized by allegations, name callings, and pockets of violence.

‘Prampram Methuselah’ as E.T Mensah was nicknamed, called for a recount when the initial results put his former protege in the lead.

However, the people of Prampam had decided, so he had to make way for Sam George.

A stalwart of the NPP, Abu-Bakar Saddique Boniface, lost the Madina Parliamentary seat to a neophyte in December 2020.

Alhaji Boniface was the likely winner as an experienced politician who had served in some ministerial positions. He had campaigned on his experience and his achievements in the constituency as an MP.

However, in a fear candidates fashion,  the newcomer, Francis-Xavier Sosu of the NDC, floored Alhaji Boniface with 62,127 votes to beat the incumbent MP, who polled 46,985 votes.

The shocking outcome led Alhaji Boniface to challenge the election results but to no avail.

“It’s a surprise, but I personally don’t accept the figures, but you will hear from me soon,” Alhaji Saddique said to the media then.

The Former Chairman of the NPP, Frederick Worsemao Armah Blay, was the Member of Parliament for the Ellembelle Constituency from 1997 to 2008.

Mr. Blay was in parliament on the ticket of the CPP until his defeat to another entrant.

He was unseated by the NDC’s Emmanual Armah Kofi Buah, who contested for the hot seat for the first time.