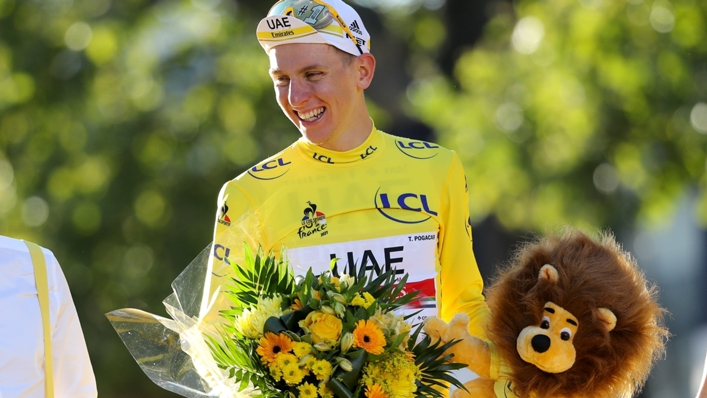 A total of 176 cyclists will line up in Copenhagen on Friday for the first stage of the Tour de France — and Tadej Pogacar stands out as the man to beat.

It is hard enough to win this most gruelling of races just once, very few do it twice, and only the true elite manage to triumph three times, something that Pogacar is primed to do this summer.

And the sublimely talented Slovenian — still only 23 yet heading to the Grand Depart in Denmark as one of the race’s hottest ever favourites — looks set to finish the three-week contest in yellow once again.

Princely Pogacar
Pogacar’s win in 2021 was mightily impressive — he took the yellow jersey on stage eight, never relinquished it and virtually freewheeled to victory by over five minutes — and the current road racing world No1 still looks in a league of his own.

The cycling phenomenon took two stages, and the overall title at the UAE Tour in February and matched that dominance at Tirreno-Adriatico a month later before warming up for Le Tour with a towering display at his home Tour of Slovenia.

His UAE Team Emirates team looks stronger than ever and the reality is that there does not seem to be another rider capable of taking him on.

The latest Tour de France odds are available at LiveScore Bet
Contenders
According to the odds, Pogacar’s rivals are likely to be Primoz Roglic and Jonas Vingegaard — runners-up in each of the past two Tours — from the all-powerful Team Jumbo-Visma.

Both Roglic and Vingegaard carry the general classification hopes of the Dutch outfit but to challenge for the podium, they will have to work as a collective alongside Belgian ace Wout van Aert.

The other certainty about any Tour de France is that there will be incidents and surprises. Pogacar’s team-mates will do their utmost to keep their man out of trouble but there are two stages in the first week which have the potential for drama.

Stage Two, taking on the 18km Great Belt Bridge, could see crosswinds make it an uneasy experience for the peloton while Stage Five threatens with 11 different sectors of brutal cobbles.
Of the other challengers, 2018 winner Geraint Thomas has to be considered following his victory at the Tour de Suisse.

Michael Woods is seen as Israel Premier-Tech’s shining light — riding alongside four-time winner Chris Froome — though the experienced Canadian is more likely to focus on individual stage wins and a potential run for the polka dot jersey.

Pogacar’s dominance at altitude has resulted in him winning both the King of the Mountains and the general classification in each of the last two Tours however, and if he stays upright, it is hard to see him leave Paris without both jerseys yet again.