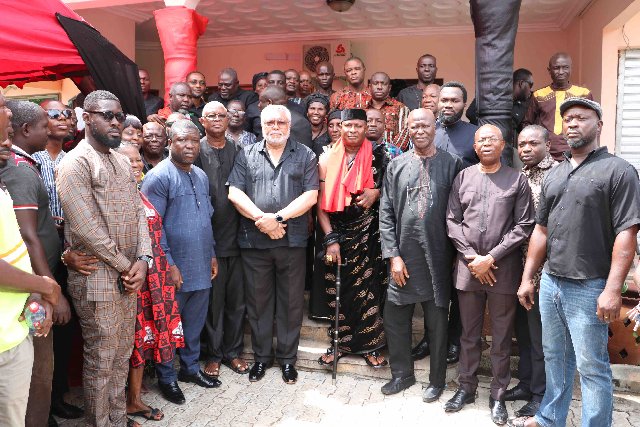 Understudy chiefs to appreciate value of truth – Rawlings to politicians

Founder and Chairman of the Council of Elders of the National Democratic Congress (NDC), Flt. Lt. Jerry John Rawlings (rtd), has called for the core values of comradeship to be re-centred in the heart and soul of the party.

The former President made the call on Thursday when he called on Mr. Henry Ametefe, Volta Regional Chairman of the NDC, to commiserate with him over the sudden demise of his wife a few days ago.

Former President Rawlings in sympathising with Mr. Ametefe expressed the sincere condolences of the NDC fraternity and stated that the party will join him to offer a befitting send-off to his wife.

Flt Lt Rawlings also used the opportunity to stop over at Sokode within the Ho municipality to express his disappointment over the state of the road in that part of the region.

He said he experienced a similar situation when he visited Hohoe a few weeks ago.

On his part, Mr. Ametefe expressed his profound appreciation to the Founder for driving from Accra in poor weather to come mourn with him.  According to the Regional Party Chairman, who was a bedrock of the cadre movement during the PNDC days, the fellow-feeling exhibited by the Founder has certainly rekindled the cadre spirit which has been missing in the NDC.

“What you have done this morning has really touched my heart and the heart of the Region.  This is what defines us as the NDC and you have proven that you still love the NDC and it is my prayer that all the mudslinging and vilification will stop so we can focus on the bigger agenda.”

According to Mr. Ametefe, the date for the final rites and burial have been slated for 13th, 14th and 15th of December 2019.

Present at the meeting were Koku Anyidoho,  immediate-past Deputy General Secretary of the NDC, Dr. Kwesi Djokoto,  Dr. Donald Agumenu , traditional leaders and the regional leadership of the party.