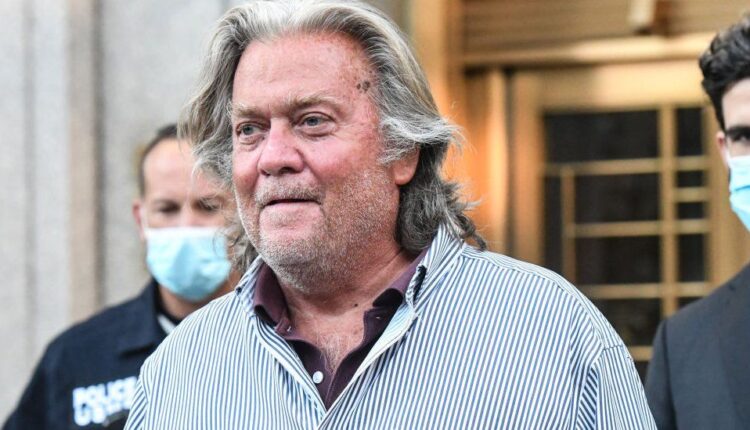 US: Lawmakers vote to hold ex-Trump aide in contempt

A US House of Representatives committee investigating the 6 January Capitol riot has unanimously supported holding a onetime top aide of ex-President Donald Trump in contempt of Congress.

Steve Bannon was summoned to testify before the panel, but refused to do so.

If the full chamber approves the matter later this week, it would be referred to justice department, which has the final say on bringing charges.

If convicted, Mr Bannon could face a fine and up to one year in prison.

All two Republicans and seven Democrats on the panel backed holding him in contempt.

In her opening remarks, congresswoman Liz Cheney, a Wyoming Republican and vice-chair of the committee, said Mr Bannon had had “substantial advance knowledge of the plans” for the protest on 6 January and of Mr Trump’s plans to discredit the presidential election result.

Mr Bannon, 67, was fired from the White House in 2017, and was not in government at the time of the riot.

Mr Trump has urged former aides to reject the House committee’s requests, claiming the right to withhold information because of executive privilege – a legal principle that protects many White House communications.

He filed a lawsuit on Monday seeking to block the House inquiry from obtaining records from the US National Archives.

Hundreds of supporters of the former president have since been arrested.

Subpoena documents quoted Mr Bannon as saying on his radio show on the eve of the riot “all hell is going to break loose tomorrow”.

Mr Bannon has repeatedly said he has no plans to appear before the committee.

Democrats argue that Mr Bannon is stalling to push back proceedings until after the midterm elections in November 2022, which may alter the balance of power in the House, which is the lower chamber of Congress.

Contempt of Congress cases are notoriously difficult to litigate – the last time such a prosecution took place was in 1983 against a Reagan administration official.

Pakistan mosque blast: At least 28 killed after explosion in Peshawar