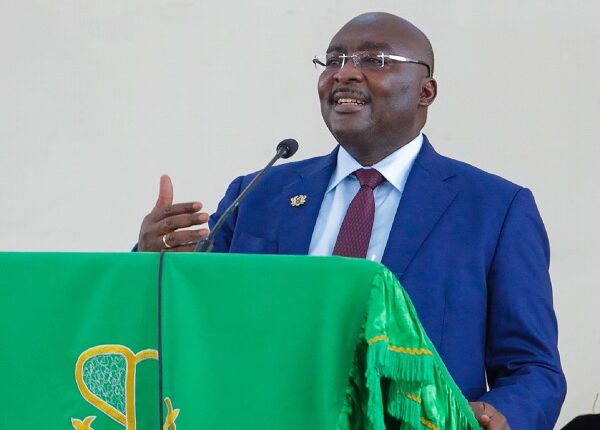 We Are Fighting Corruption With Deeds, Not Words – Bawumia

The Vice President, Dr Mahamudu Bawumia, has urged Ghanaians, especially politicians, to inculcate moral values and high standards in the quest to build a society underpinned by a common set of aims and beliefs.

He has also charged politicians in particular to emulate the Akufo-Addo government by backing up their claims of fighting corruption through deeds, not just words, to make Ghana a better place.

Speaking at the 76th Graduation ceremony of the Trinity Theological Seminary, Legon on Saturday, 13th November 2021, Vice President Bawumia said in today’s world, it has become important that countries deliberately develop a society of persons who are not merely prepared for jobs, but are also set for ongoing growth in all aspects of life to make a difference in the world.

“As Ghanaians, we could build a distinct moral identity and constitute a reference point for people of other nations. We must endeavour, both in our public and private lives, to do what is morally right and eschew what is morally evil. A high sense of morality is “sine qua non” of good citizenship. That much, not material wealth, not prosperity religion, is what we need in order to build a good society” he emphasised.

Corruption
Zeroing in on corruption, Vice President Bawumia said several pronouncements have been made in the past indicating a desire to fight it, but these have largely failed, hence the decision by the Akufo-Addo government to digitize the process of accessing government services and reduce the human interface, which lends itself to corruption.

“When we came into office, one of the approaches we took to address the issue of corruption is to put in place systems that eliminate corruption through digitalization. Through digitalization we have been able to tackle corruption at the Passport office, Ports, GRA – TIN is now the Ghanacard number, SSNIT, NHIS, you can purchase electricity credits using your mobile phone. Every public sector worker will be uniquely identified by the Ghanacard number – no more double salaries.

“The Motor Insurance database, containing the data of all the insurance companies, has ensured that now we don’t have fake insurance certificates. You can dial a short code and check the insurance status of a car before you board. The data of the Births and Deaths Registry is being digitized, to take out fake birth certificates. And now, with the Ghana.Gov platform, you can access all Government services and make the necessary payments without any major human interventions, drastically reducing corruption.”

“We are building a new system to underpin the economy,” he explained. “A system that makes for greater transparency, promotes accountability and efficiency in every aspect of public interactions. It is a system that minimizes incentives to pay bribes and opportunities for corruption in the delivery of public services.”

Touching on the theme for the celebration, “faith-based education, morality and nation-building”, Dr Bawumia indicated that individual and national, concerted efforts would be required to rekindle the core societal values of the country.

“We need to work consciously on the nation’s value systems to enhance the moral temper of the country to help accelerate national development. Our values are very important, and we should hold on to them.

“As data indicates, a majority of Ghanaians are religious. Therefore, religion does not only have a profound influence on our moral values and life, but also on the development of our country.”