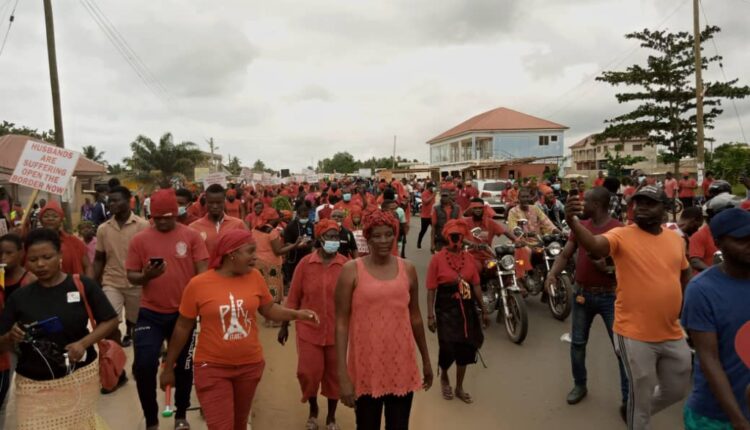 We are suffering – Residents of Aflao protest continuous border closure

Some aggrieved residents of Aflao thronged major streets in the Volta Region to protest the continuous closure of the border between Ghana and Togo.

The demonstrators who were clad in red and black attire were seen holding placards with inscriptions such as “Mie Fu Kpem” meaning “we are suffering”, as they chanted war songs on Friday, August 27.

Residents in the Ketu South Municipality have one request: for the government to open the Aflao border to allow traders openly go about their activities.

Although there has been some ease in movement since the beginning of 2021, Ghana’s borders and many indoor entertainment facilities remain closed after 17 months, with no end in sight. But residents say reopening is long overdue.

Notable personalities seen among the demonstrators included the Member of Parliament (MP) for Ketu South, Abla Dzifa Gomashie, who called on the government to put measures in place to alleviate the suffering of people living in the border towns.

“In March when the announcement came that the borders were going to be closed, the airports were closed too. We put in protocols and the airports are open now but who is interested in what is happening to the people living at the border.

“We need for the state to come and say this is the timeline, from March till 2023 the borders are going to remain closed, but within that time this is what we are putting in place because it’s Covid or because it terrorists. Whatever the reason may be, communicate something to us and then the state must find a way to alleviate the suffering of the people.

“I’ve been told that our president is a listening president, I’m hoping that this time around after the demonstration, something will be said,” she stressed.

Meanwhile, the novel virus crippling businesses and killing many keep rising in the Volta Region. The region recorded its first nine cases of COVID-19 on April 12, 2020.

COVID-19 Update in the Volta Region

On August 26, 2021, Dr Timothy S. Letsa, Volta Regional Director of Health Services, disclosed that the region has in the past six weeks been experiencing an upsurge in the number of COVID 19 cases similar to the rest of the country.

He said the cumulative case count had moved from 2,738 on July 10, 2021, to 4,175 on August 23 accounting for 35 per cent of all cases recorded in the region since the inception of the pandemic 17 months ago.
“The Region presently has recorded the sixth-highest number of cumulative cases in the country after Greater Accra, Ashanti, Western, Eastern and Central Regions.”
Dr Letsa also mentioned that the region also accounted for 50 mortalities which was approximately five per cent of the country’s 982 mortalities.
He said in terms of active cases, the current active case count of 77 ranked the Volta Region eighth behind seven other regions in the country.
AflaoBorder TownCovidnewsnewspaperOnlineWebWorldnews