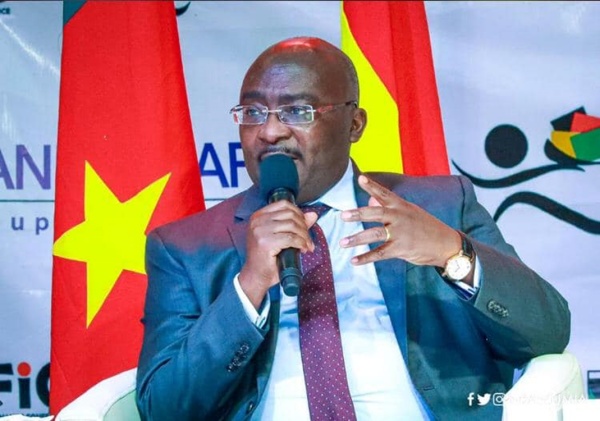 We have invested US$740M in water systems – Bawumia

The Government has invested about US$ 740 million in the provision of water systems in various towns and communities across the country, under its “Water for all Policy,” Vice President Mahamudu Bawumia announced in Tuna on Tuesday

He said for the past five years, there had been a remarkable increase in access to safe and clean water in the country.

Dr. Bawumia said this during the commissioning of the Numa Purified Water System in Tuna in the Sawla-Tuna-Kalba District of the Savannah Region under the enhancing Water and Sanitation Hygiene (WASH) programme.

He said the most recent Population and Housing Census of 2021, recorded that overall, Ghana’s access to potable water and easy access to water was 87 percent.

He contended that there had been improvement in the water and sanitation sector nationwide and that it had contributed drastically to the reduction of cholera for the past five years in the country.

“If we continue in this direction, it tells us that the investment in Water and sanitation have been significant and had been worth it.

The Vice President agreed that the government alone was not the only player in the team when it came to the provision of water and said the private sector had an important role to play in that regard
He commended the 4Ward Development West Africa for delivering the project for the Tuna community and appealed to other benevolent organisations to partner with the government in the provision of water and sanitation facilities for the people.

The Vice President, reacting to the Tunawura’s appeals and concerns raised at the ceremony, assured the people that the government would do everything possible to address some of the requests.

The Tunawura, (King of Tuna) Daniel Safo Mahama Amantana appealed to the government to upgrade the Tuna Power Station to double face and improve the road network within Tuna and surrounding communities, as well as the rehabilitation of the Sawla-Wa portion of the trunk road and the Tuna Market, which was in a deplorable state.

The Tunawura urged the government to provide residential accommodation for teachers and provide a fence wall for the Tuna Senior High School while efforts made towards the upgrading of the Tuna Clinic into a polyclinic to deliver quality healthcare services to the people.

On security, the Tunawura called for the upgrading of the Police Post at Tuna and to provide more police personnel to the community to help check crime wave and ensure law and order in the area.