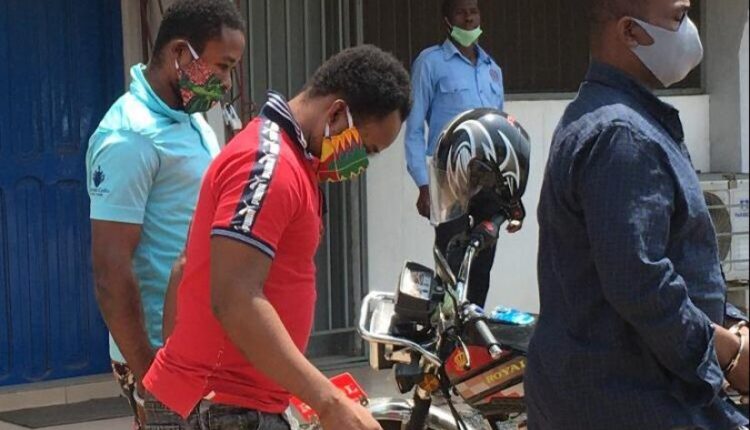 Five months after the arrest of three traditional priests over the murder of a biochemist, the prosecution is asking for more time to study exchanges between the deceased and the accused persons.

It is the second time the Kaneshie Magistrate Court, which is yet to take the plea of the accused persons, has been forced to adjourn the case.

“The police are conducting further communication analysis of the interaction between the parties,” Lawrence Anani, the prosecutor, told the court.

Christian Awoe Gameli, aka Power One, 40; Famous Adukonu, aka Scorpion, 37, and Yaw Azamate, 27 are facing two charges—murder and conspiracy to commit murder.

Two others, Michael Ahiavinye and one Buzanga are on the run.

The facts of the case presented by Detective Inspector Lawrence Anani, were that the complainant is Rev Comfort Ruth Quartey Papafio, who resides at Takoradi in the Western Region.

The accused persons; Gameli, Adukonu and Azamete operate their business at Adu-Kojo and Kwasi-Nyarko, all suburbs of Mame Dede in the Eastern Region.

On January 17, this year, the complainant reported of her missing husband, Mr Quartey Papafio, from his residence at Kasoa in the Central Region on January 15, this year.

Detective Inspector Anani said after receiving the report, the police gathered intelligence that the deceased was last spotted at Gameli’s shrine located at the outskirts of Adu Kojo, which led to the arrest of Gameli and Adukonu on April 21, this year.

A search conducted at Gameli’s shrine revealed “two pump action guns, one single barrel gun, eleven packets of cartridges and seven other pieces of the cartridges from his room and two shovels were found hidden at the back of his house.”

During interrogation, Gameli and Adukonu admitted to shooting the deceased with the pump-action gun on January 15, this year and buried the corpse at the Shrine.

On April 29, the two led the police to “Power One herbal/ Spiritual Centre where the police identified the deceased’s grave in a make-shift cemetery behind Gameli’s house.”

The scene was then secured and an exhumation order was obtained from the court for that purpose.

According to the prosecution, the following day, a pathologist in the company of senior officers from the CID Headquarters, personnel from the crime scene management team, Forensic Science Laboratory, Drone Operation, in a joint operation exhumed the body of the deceased.

He said when the grave was dug, “the decomposed body of Mr Quartey Papafio was removed and it was discovered that his grave was among other graves in the accused’s cemetery, which was well fenced.”

Prosecution said investigations disclosed that on December 29, 2019, Gameli, Adukonu and Azamete conspired to kill Mr Papafio, hence lured him with the assistance of one Buzanga, also a traditional priest at Kasoa, currently at Large.

According to Inspector Anani, before the murder of the deceased, the accused persons intentionally made a false statement to the deceased and succeeded in collecting GH¢10,650 from him.

The deceased was then invited to the shrine on January 15, this year for purification and in the process, Adukonu shot him with Gameli’s gun.

“The accused drained the quantity of Mr Papafio’s blood into a plastic gallon and hid same at the shrine while Gameli took possession of the deceased mobile phones and later buried the deceased with the assistance of Azamate and Michael who is also on the run,” he stated.

According to the prosecutor, Gameli and Adukonu allegedly confessed to the police that the blood in the gallon was a mixture of Papafio and another victim who was also buried among other bodies at the cemetery.

He said the gallon of blood and the body were deposited at the Police morgue for examination.

The complainant later identified the two mobile phones of the deceased.

“The Pathologist gave the cause of death of Mr Papafio as hemorrhagic shock, traumatic amputation and unnatural severe chest pain

Three traditional priests who allegedly caused the death of Edward Quartey Papafio, a 64-year-old bio-Chemist at Adeiso in the Eastern Region, were remanded by the Kaneshie District Court.

Christian Awoe Gameli aka Power One, 40; Famous Adukonu aka Scorpion, 37, and Yaw Azamate, 27, have been slapped with charges of conspiracy to commit a crime to wit murder and murder.

At the last sitting, the prosecution led by Detective Inspector Lawrence Anani, prayed the court remand the three accused persons.

The court obliged prosecution’s prayer and remanded them into prison custody.

A bench warrant has also been issued for the arrest of Michael Ahiavinye and one Buzanga who are at large.