A glow of orange sunlight baths the sky, tangling with grey clouds. On a green canopy of trees, birds chirp as a tribe of monkeys stroll on a paved road.
A giant emerges from the wood with its ears flapping; shrubs bow to kiss the feet of this king of the forest.

Standstill
A stone’s throw away on the road, there is a standstill. Armed park rangers stand nearby. Tourists watch in awe as the elephant takes its gentle stride.

Roll back. Before the standstill, the then Minister of Tourism, Arts and Culture, Mrs Catherine A. Afeku, probably thrilled by a personal encounter with the symbol of her party, was out of her vehicle.

With other members of the entourage, she watched the tower of a beast graze and took out her phone to snap a few memories from the country’s largest wildlife refuge, the Mole National Park.

The elephant, attracted by the wave of phone flashes, takes a few steps forward but it is to be the beginning of a melee.

The Tourism minister’s retreat can beat Usain Bolt’s on a 100-metre dash, even in her high heels. A police dispatch rider left his motorcycle to seek refuge in the Intercity STC Coach that chauffeured us.

The rangers attempt a distraction by speeding their safari vehicle, which works with the elephant chasing the vehicle temporarily and then abandoning the race to continue its feast on shrubs.

With everyone locked up in the cars, the elephant takes casual glances at the vehicles and goes back to munch on leaves of shrubs it has stamped on.

After about 30 minutes of silence around it, the elephant loses interest and swaggers into the woods albeit with lazy footsteps.
The police officer jumps out of the bus to take his bike but the fear on his face was obvious. Although an armed park ranger is beside him, he could not take his eyes off the elephant. He missed the keyhole of his bike a few times, before zoomed off.

Sleeping in the wild
With the elephant sauntering away, we sped off to the entrance of Zaina Lodge and subsequently the Mole Motel—our abodes for the night.

Zaina Lodge’s online brochures describe it as ‘West Africa’s first luxury safari lodge’ and it lives up to the praise. From the outside, it looks like an ordinary northern Ghana architecture, but that initial impression changes as one walks through a roofed walkway into the lobby. 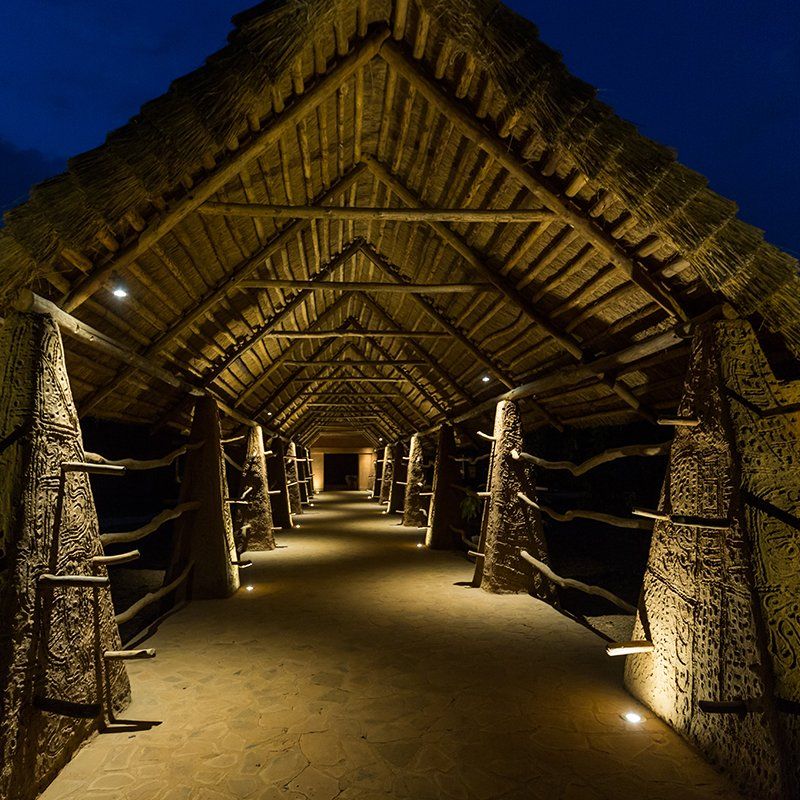 Its owners say the lodge’s design was inspired by the ancient Djenne architecture of the Larabanga Mosque, one of the oldest in West Africa, which is located just outside Mole Park.
Its exterior facade is designed in native stone harvested from the lodge site and the roofs are covered with woven thatch grass harvested in northern Ghana.

The lodge’s pool, named Infinity Pool, which from afar gives the appearance of emptying into a stream in the forest, offers an incredible panoramic view of parts of the park frequented by elephants and antelopes and inhabited by crocodiles.
Away from Zaina Lodge, the park’s accommodation that fits the not-so-deep pockets is the Mole Hotel, a row of concrete buildings. 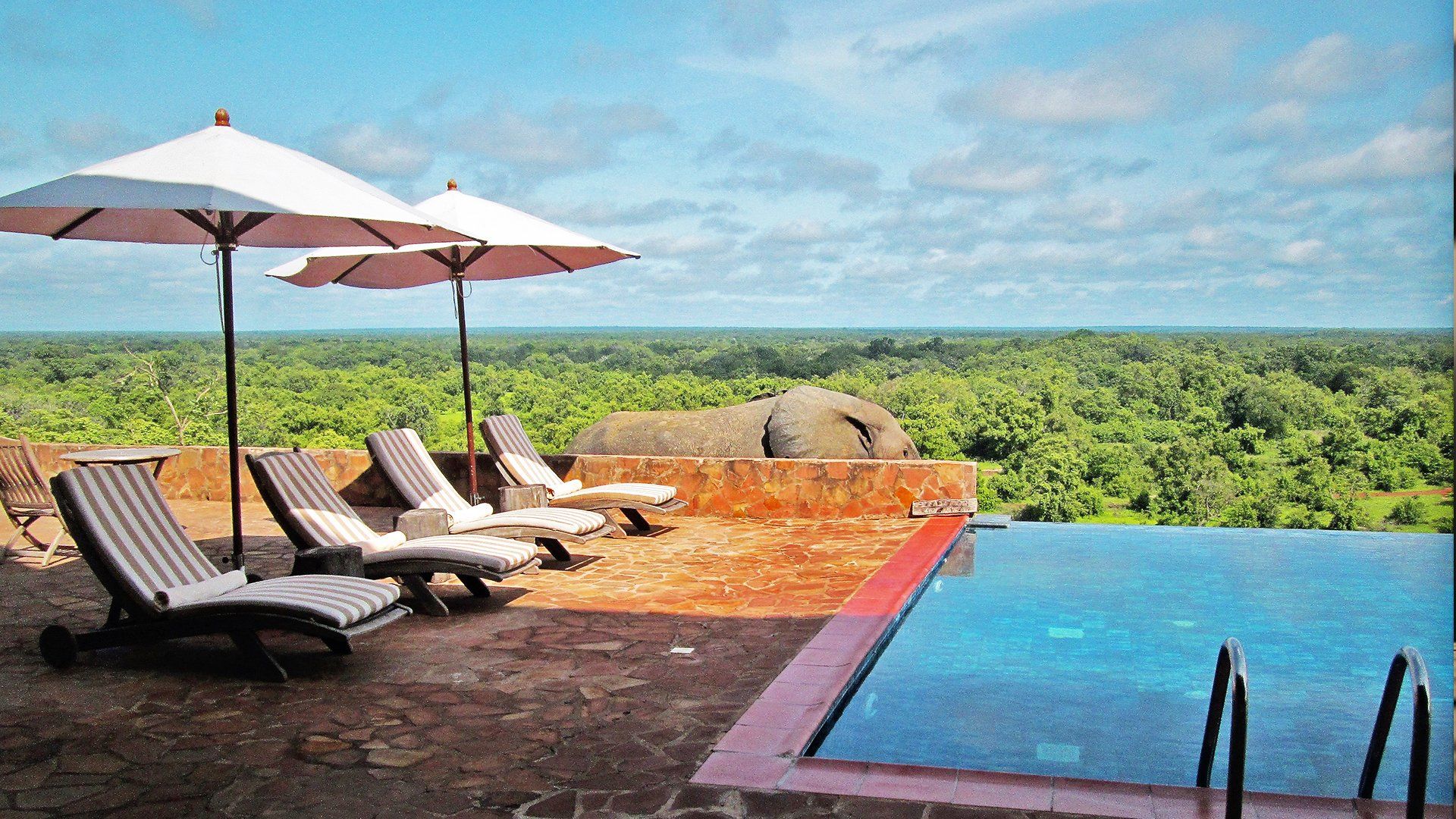 This is a great place to watch the sunset—the orange ball sits on the horizon, ready to drop into the canopy of trees. As close to nature as one can get, it also has a simple pool close to its restaurants that also overlooks the park. A hangout for elephants in the past, it is now a stroll in the neighbourhood for warthogs and baboons. 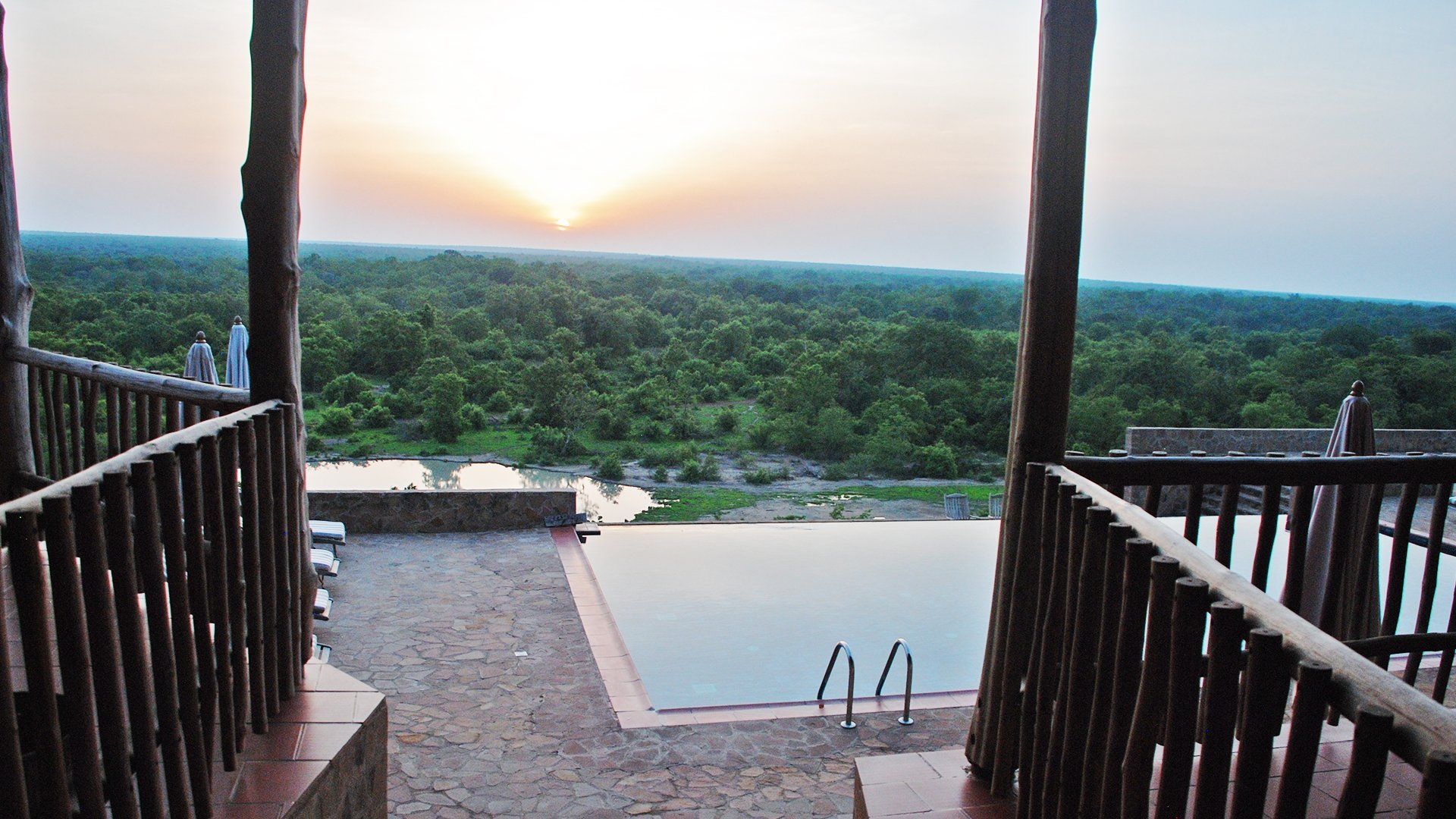 If the welcome was eventful, the next day would be more than fun.

By 7:30 a.m., the next day, we gathered in front of the park’s reception area for a briefing. When that was out of the way, we took a tour of the park’s museum which has an impressive collection of the good and the evil, with the good being the skulls and skeletons of some species in the park, including the skull of an elephant that looks more like the trunk of a tree.
The evil is the armoury of evil deployed by poachers and hunters—from charms, amulets, traps, torchlights and many other items that can inspire man’s wickedness in the belly of a forest full of the untamed.

The Mole Park is home to more than 94 mammal species, with large mammals such as elephants, hippos, buffaloes and warthogs. The park is considered a primary African preserve for numerous antelope species. Olive baboons, black-and-white colobus monkeys and the green vervet are among the monkey species that call it home. Slender-snouted and dwarf crocodiles are among the 33 known species of reptiles that call this breathtaking park their address.

With all this crowd of animals in mind, we were offered a choice among a drive safari, night safari and a foot safari which involves walking through the park with the possibility of seeing animals, including birds, antelopes, kobs, elephants, baboons, warthogs, buffalos and monkeys. But the caveat was that seeing all these was not guaranteed.

The other option was the drive safari—a drive through the park, which means covering a large distance in a shorter space of time with the possibility of seeing more animals; while the night safari offered a ride through the park with a chance to see a number of nocturnal animals.

We settled for the drive safari. It started with a little excitement but great anticipation. A journey through a sublime mix of savannah and rain forest, we were greeted with water rushing through creeks.
It was a unique moment to soak in all the fresh air and detoxify the body from all the fumes from Accra. Then the excitement began to build up with a tribe of monkeys that were too swift for the eye as they swung from tree to tree.

The kobs followed, then a troop of baboons that lorded over roads but took to hiding behind trees. There were guinea fowls and rare bird species that were temporarily distracted by our presence. 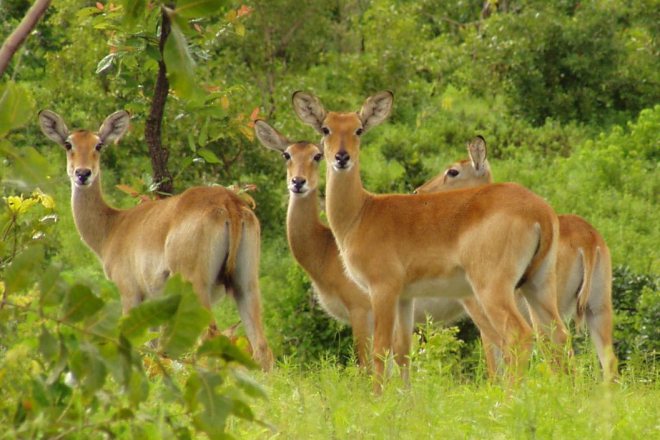 Lions are said to make rare appearances once in a while.

The search for elephants
All this while, our bodies, minds and souls were searching for the elephants. We teased ourselves about who would run faster if we spotted them.

After roaming for about an hour and crisscrossing other tourists who had not seen the herd of elephants, our guide received a call that they were heading toward a stream. True to the word, they were ambling through the forest—about five of them. Mole, we were told, has more than 15. 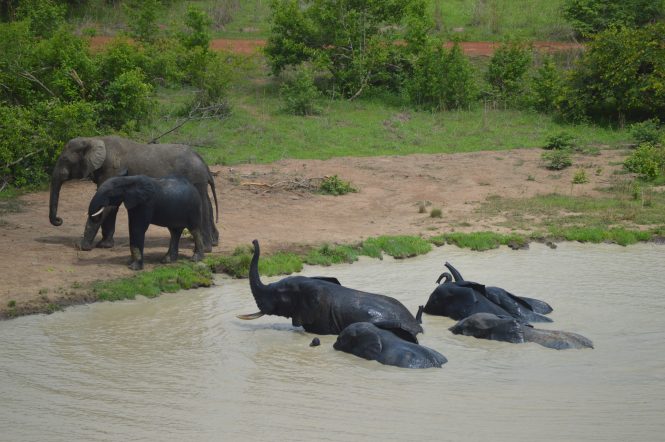 We jumped out of the vehicle and raced towards them, making sure we kept off their path. Their gang was not bothered. Only one of them, described as a teenager by the guards, was showing off.

It stood with its back to the others, its eyes on us—a show of youthful exuberance. With no sign of danger from us, it walked towards the herd. Cameras got busy. The teenager swapped places with another elephant called Effor, on the guard duty, as they slipped into the stream.

Before then, they were busy having breakfast, but for us, it was time for selfies and memorable pictures, with them as the backdrop. Those pictures will adorn the walls of our social media pages minutes later.

As the country opens to social gatherings months after a shutdown of tourist sites, visit a tourism site to help the recovery of the hospitality industry faster.

The next time you make your way up north, you might just want to go to the Savannah Region and savour the fresh air and adrenaline Mole has to offer.

NPP has 11% urge over NDC on realistic promises; 10% advantage on delivery – CDD…

NPP has 11% urge over NDC on realistic promises; 10% advantage on delivery – CDD Survey