Facebook has also removed at least one of the offending posts showing a woman being slapped while TB Joshua says he is casting out a “demonic spirit”.

The preacher said he was appealing against YouTube’s decision.

TB Joshua is one of Africa’s most influential evangelists, with top politicians from across the continent among his followers.

A YouTube spokesperson told openDemocracy that the channel had been closed because its policy “prohibits content which alleges that someone is mentally ill, diseased, or inferior because of their membership in a protected group including sexual orientation”.

What does the video show?

The video is an update of a prayer session of a woman called Okoye, first broadcast in 2018.

In it TB Joshua slaps and pushes Okoye and an unnamed woman at least 16 times and tells Okoye: “There is a spirit disturbing you. She has transplanted herself into you. It is the spirit of woman,” openDemocracy reports.

The video which was viewed more than 1.5 million before the YouTube channel was taken down, later shows her testifying before the congregation that “the spirit of woman” had been destroying her life but she had been healed after the preacher’s prayers.

She declares that she had stopped having “affection” to women and “now I have affections for men”.

Who is TB Joshua?

The founder of the Synagogue, Church of All Nations is one of Nigeria’s most popular televangelists but is perhaps the least flamboyant of his peers. 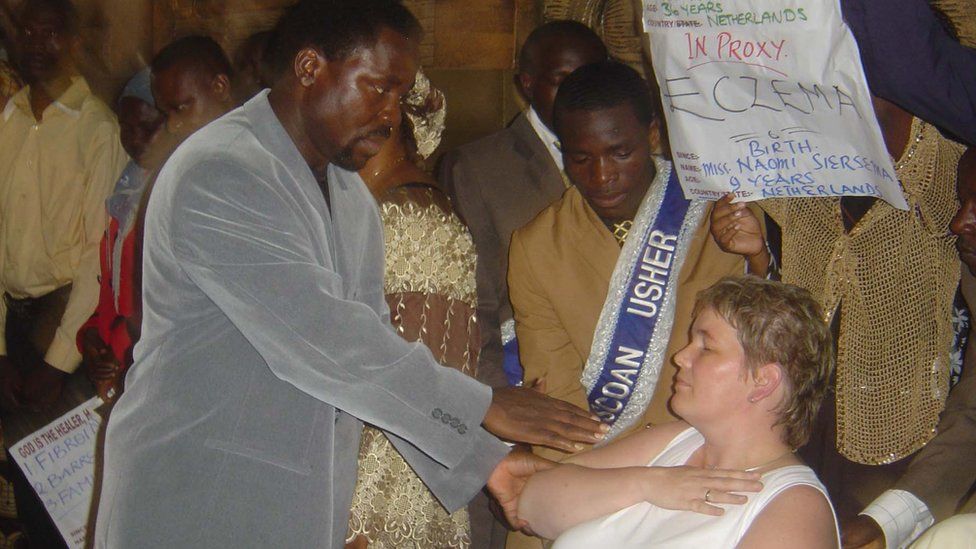 His rise to prominence in the late 1990s coincided with the explosion of “miracle” programmes performed on national TV by various pastors.

TB Joshua was often mocked for lacking the finesse of his colleagues during “deliverance” sessions – an intense prayer that resembles exorcism.

His ministry professes to heal all manner of illnesses including HIV/Aids and attracts people from all over the world.

Known as the “Prophet” by his followers, Mr Joshua runs the Christian television station Emmanuel TV and often tours Africa, the US, the UK and South America.

In 2014, one of his churches collapsed, killing at least 116 people, including many South Africans.

A coroner in a Lagos court said “the church was culpable because of criminal negligence” but he never faced any charges.

Is this the first time he’s been banned?

In May 2004 the National Broadcasting Commission banned TV stations from showing programmes of pastors performing miracles on television unless they had been verified.

There were accusations that some of the miracles were fake and performed by actors.

TV stations pulled the pastors’ programmes to avoid having their licences revoked or being hit by fines from the NBC.

But as free-to-air satellite boxes became affordable and popular in many Nigerian homes, the televangelists set up broadcast facilities and continued with their “miracle” programmes.

They broadcast with state-of-the-art facilities and have dedicated channels on major satellite TV providers in Africa, showing activities of the churches and pastors non-stop. Though was still under the NBC’s purview, they were mostly allowed to carry on.