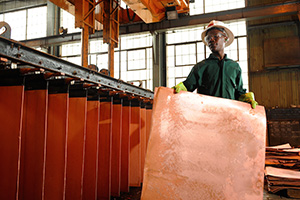 It comes despite tense relations between the mining giant Glencore and the government in Lusaka over the running of Mopani.

The state investment group already owns 10% of the copper mining business, but the Zambian mining minister, Richard Musukwa, says the government will negotiate with Glencore to increase its stake, although he did not reveal by how much.

In April Zambia threatened to revoke Glencore’s licences, after the company announced plans to put Mopani into care and maintenance, industry jargon for suspending production.

The global miner wanted to close the copper operation for three months, because of low commodity prices and the coronavirus pandemic.

Mopani had been expected to produce between 50,000 and 70,000 tonnes of copper this year, but it has struggled because of problems in Zambia.

The government in Lusaka will be aware that squaring off against an international mining giant, which is ready to play hardball, could damage the Zambian economy.

Glencore has a record of leaving unprofitable resources in the ground, for example in 2015 it cut its annual production of zinc by a third.

Zambia depends on copper mining for revenues and it needs to make payments on loans, as the country’s foreign debt has soared.