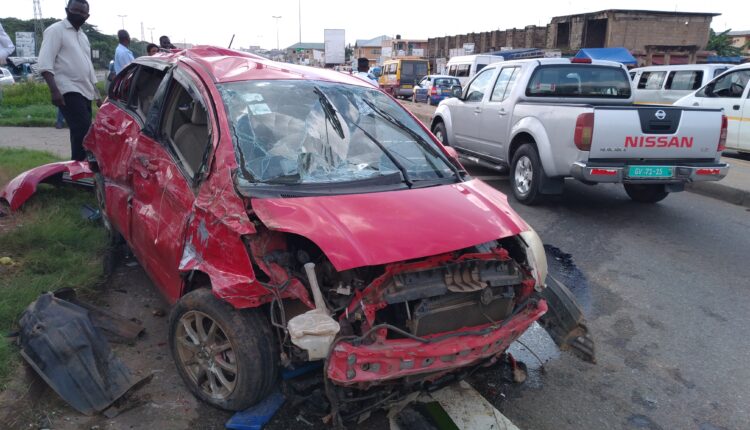 A green tipper truck loaded with sand rammed into the vehicles on Thursday, October 8, leaving a motorcycle rider unconscious.

The accident occurred at about 8:00 am when a truck, with registration number GT 6554-19, drove at top speed from Ablekuma heading towards Baah Yard on the Awoshie-Ablekuma highway.

An eyewitness, Isaac Asumang, said the truck could not stop when it got to the traffic light at the Awoshie Last Stop, close to the Fraga Oil fuel station.

This was corroborated by a NADMO Official at the Ga Central Municipality, Accra Zonal Council.

He was on his way to work when he saw the incident.

“With the speed of the truck, I suspected that the break had failed,” he stated.

The driver kept honking but the traffic light had turned red and the vehicles ahead had stopped. 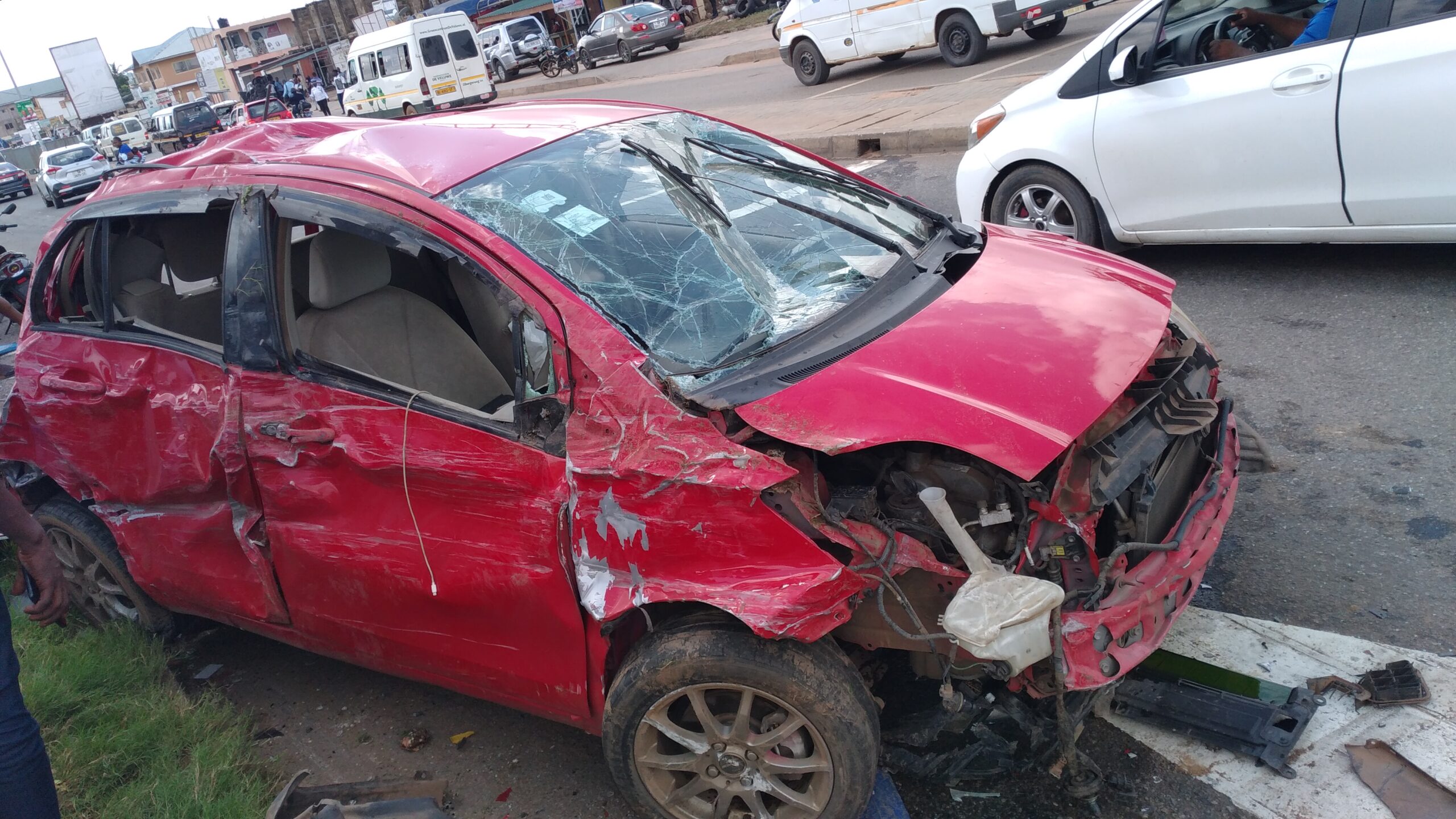 An Accra-bound Sprinter managed to swerve onto the pavement but pedestrians suffered a minimal hit.

In the process of the confusion, an Okada rider smashed his motorbike into the commercial Sprinter bus and fell off the motorbike.

“He passed out immediately and his unconscious body laid on the street for some minutes,” the eye witness narrated. 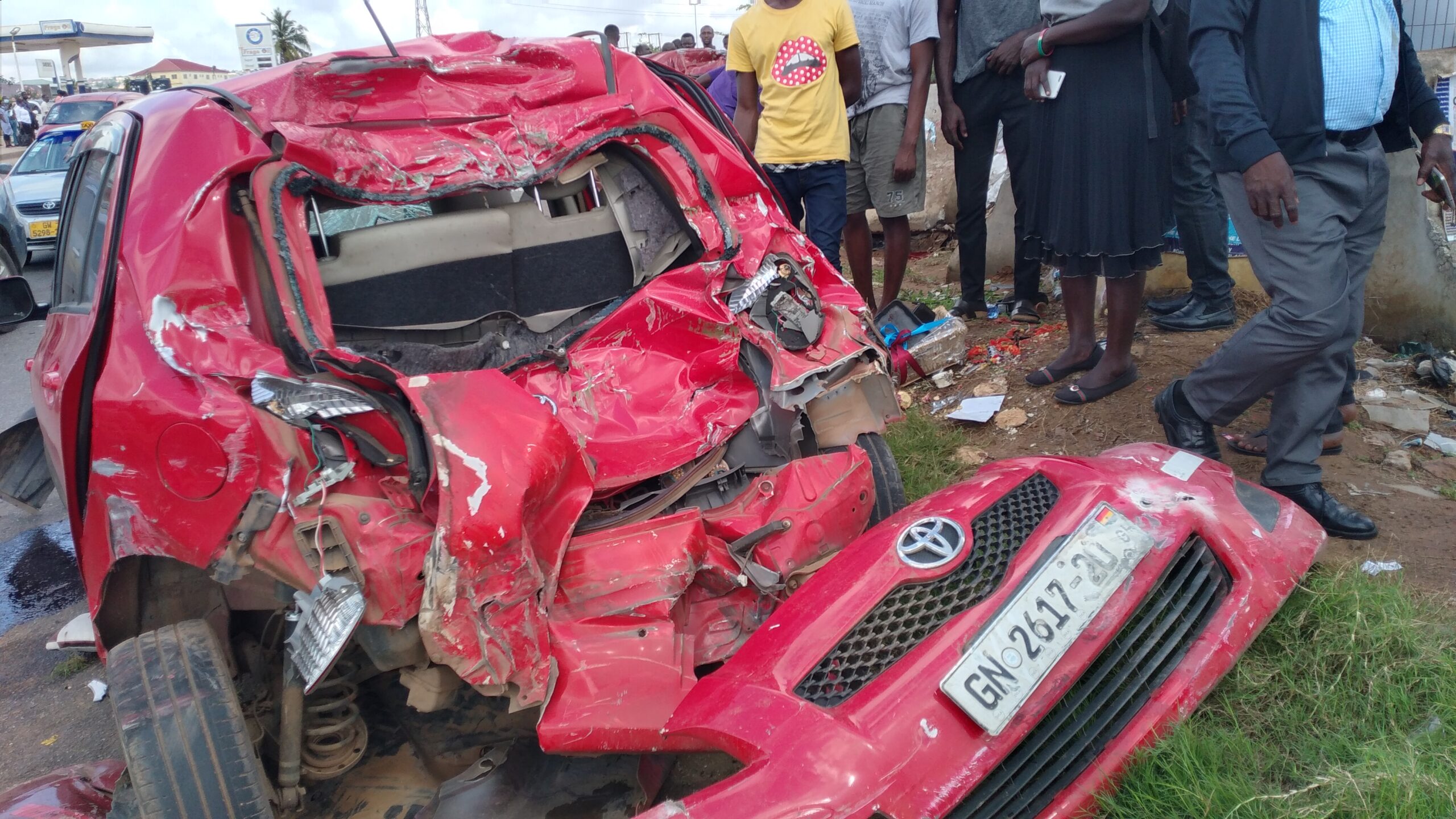 The truck rammed into a Hyundai Elantra saloon car which registration number GE 8928 -17 which had two female occupants with a cake. The ladies suffered bruises and the right side of their car was mangled. 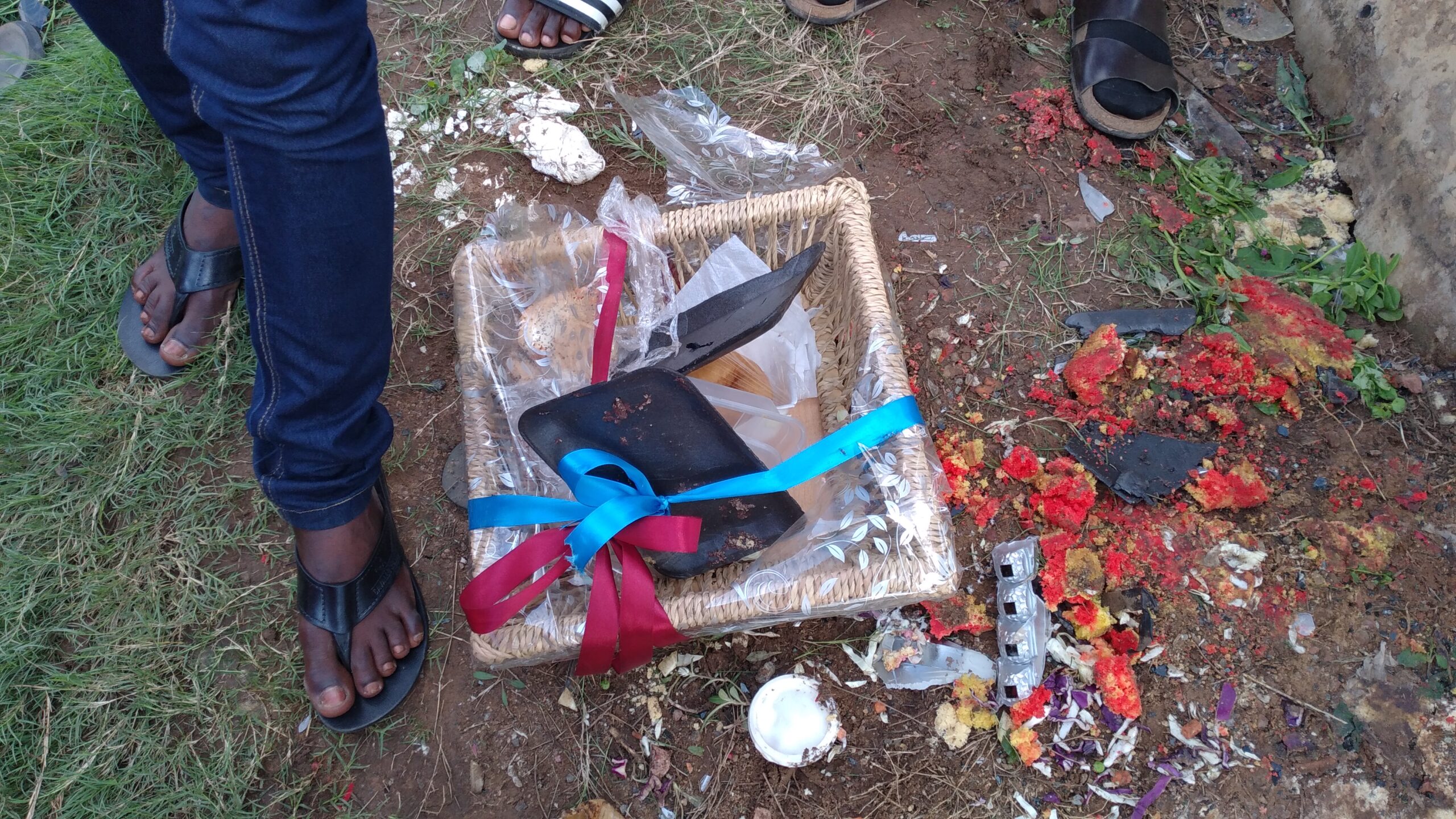 Other cars on the path of the truck were not spared as it hit an Uber Toyota car with registration number GN 2617-20.

Eyewitnesses said the Uber had no passenger but the driver could barely stand when he was rescued.

His car was damaged beyond recognition.

The next car on the path of the truck was a private Toyota Wish with registration number GE 194-19. 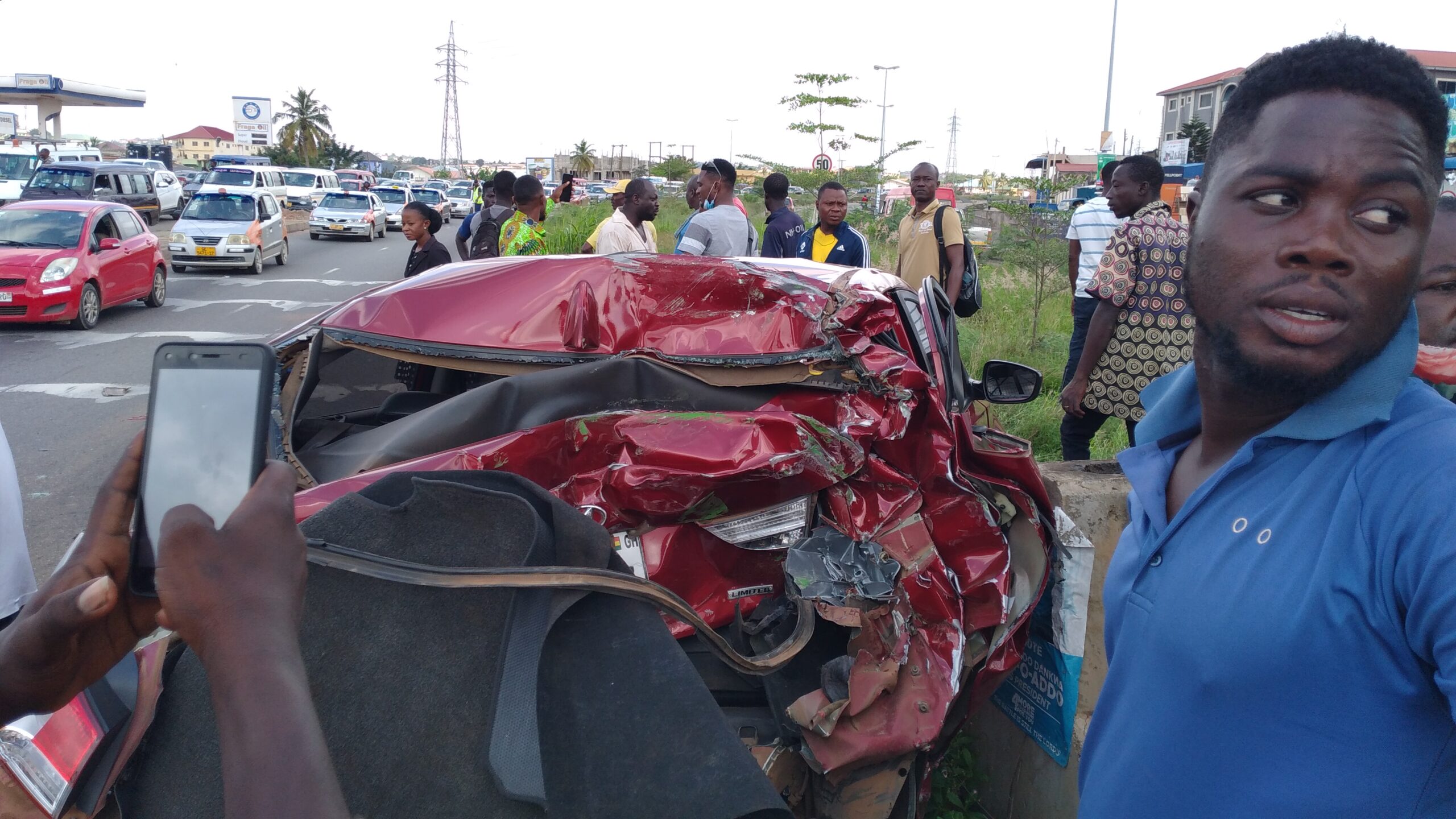 The occupant was only the driver and the rear of the car had a huge dent.

The Truck hit another motorcycle and proceeded about 200 metres before grinding to a halt opposite the Odorgonno Senior High School.

The rider was thrown off the bicycled and fell on the side of the road.

All the injured were transferred into separate taxis and rushed to the Ga South Hospital, according to other eyewitnesses.

An MTTD official who did not disclose his identity said they did not meet any of the drivers at the scene when they arrived. He said they received an emergency call at the police headquarters they were dispatched to the scene.

He could not confirm if there were any fatalities but explained to theghanareport.com that the victims sustained serious injuries.

He said they would conduct an investigation and follow up with other processes to gather all the details. 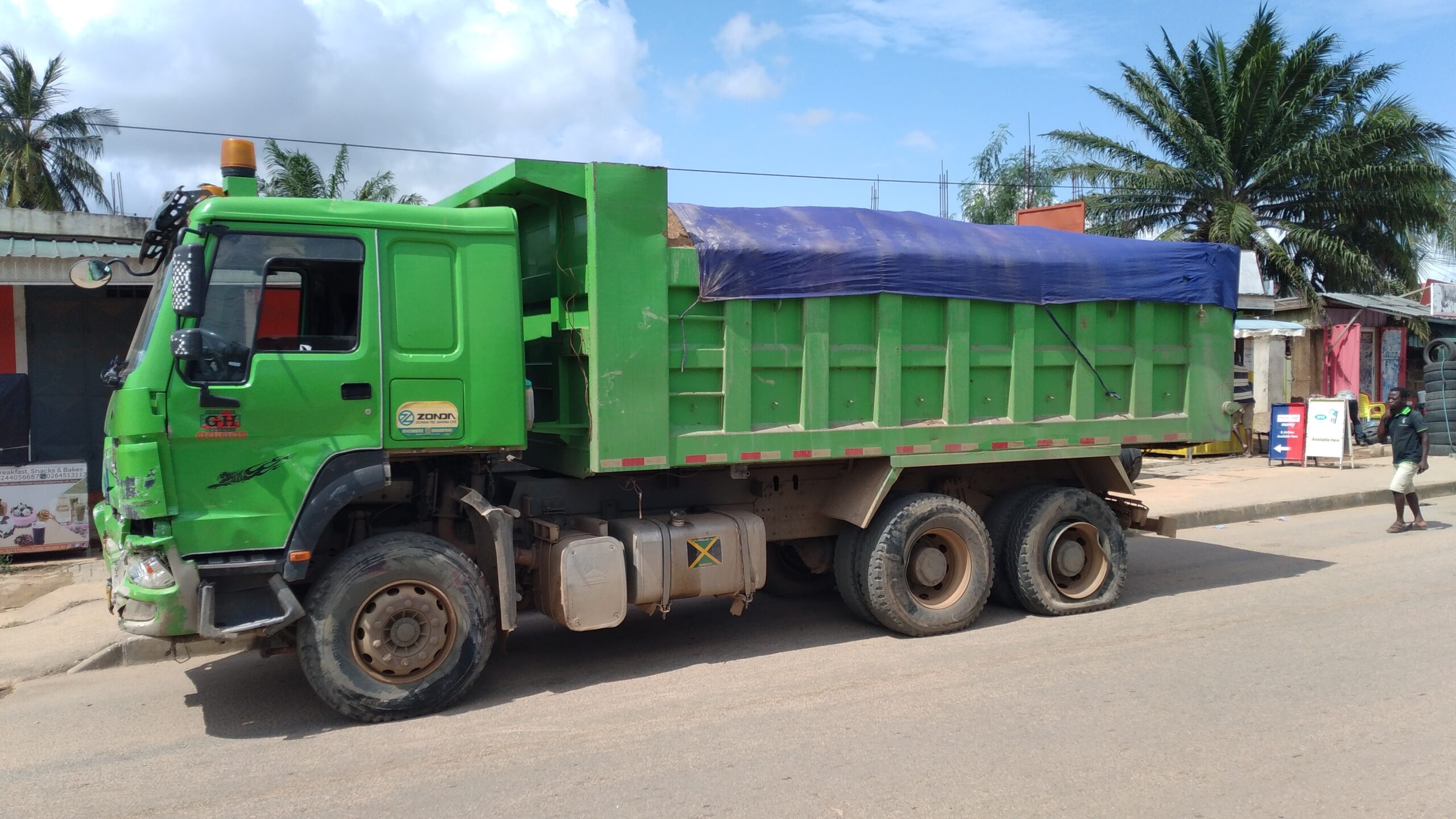 Three towing vehicles were also dispatched to the scene to remove the damaged cars to the police station.

Some NADMO officials also arrived to help the police manage the traffic with scores of passersby gathering at the scene.

It would be recalled that residents embarked on a demonstration to compel authorities to fix the traffic lights at the Mangoase side of the Awoshie-Ablekuma stretch in August.

This was after a 29-year-old resident, Thomas Nyamavoh, was hit and killed by a moving vehicle due to a malfunctioned traffic light.

Prior to his death, it was reported that several knockdowns had led to deaths including children who attend the McCarthy Hill Basic School located along the highway.