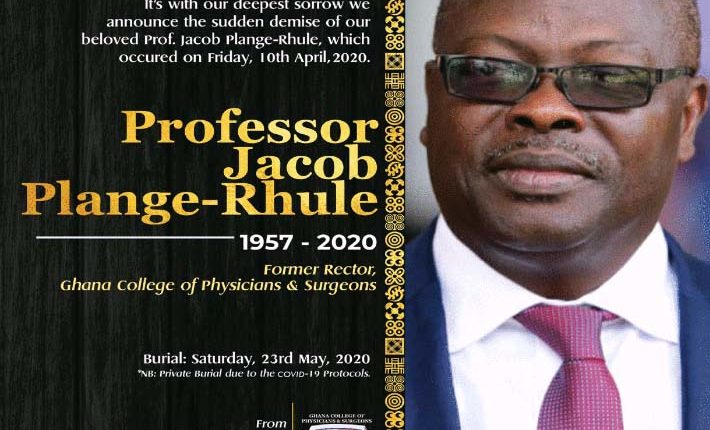 COVID-19: ‘How do I cope without you?’ – Wife of late rector as husband goes home

The late Rector of the Physicians and Surgeons College, who died from coronavirus, was  laid to rest on Saturday after a solemn memorial service at the Transitions Funeral Home.

Prof Jacob Plange-Rhule was later interred at the Gethsemane Memorial Gardens at East Legon after the one-hour service attended by close family members and associates.

The service was live on Facebook as his family adhered to the government’s ban on social gatherings that bars mass assemblies at funerals, weddings and other events.

A funeral like that of the late renowned medical brain would have attracted hundreds of mourners, including VIPs, but with the permissive private burial coming with a caveat for only 25 people, it was strictly a private affair. It, however,  attracted more than 700 eyeballs on Facebook live.

Prof Plange-Rhule, who was one of the frontline doctors in the fight against COVID-19, succumbed to the disease on April 10.

This was in spite of a desperate last-minute effort by the Presidency to get him a life-saving medication from Kenya.’

Ghana’s presidential aircraft jetted off to the East African country to get the medication, which research from China showed could be administered to coronavirus patients before the disease got to an inflammatory stage.

But the trip proved futile as the drug arrived in the evening while the respected medical doctor died in the morning.

In an emotional farewell to her late husband, who was also her compatriot in the classroom and the theatre, Dr.  Gyikua Plange-Rhule, described him as a selfless person, who prioritised the needs of his family.

“He was constantly pushing each and every one of us more and more to reflect his own level of achievement. We used to feel so pressured, and sometimes dodged his calls, knowing it was about something we are yet to do. Now, we will give anything to have that pressure again.

“It is so hard to capture in these short words a relationship that lasted for more than 33 years. We had our ups and downs, we had our good times, and the not so good times, but we remained good to each other throughout.

“I didn’t dream that things will end this way. You who we thought was working at the Physicians College, away from patients’ care would succumb to this disease. Your death has broken our hearts. I still want to call you about little things and you’ll always say, ‘leave it to me, somebody will come and get it sorted out for you. You sorted out everything for us.

She had a few questions for her beloved husband, whose life has been snatched alongside 31 others by the deadly COVID-19 in Ghana.

“I wondered to myself all the time, about how your last moments were like between 2:10 am and 6 am on that Friday, when you were last seen online. Were you alone?, Were you afraid? Did you know the end was near? I supposed these questions will never be answered, as you are the only one who could answer them for me.

“I don’t know how I’m going to move ahead with you gone, but I know God has promised us that He would never leave us, nor forsake us. This is the hope upon which I stand, as I prepare to face an earthly future without you,” she said in a quivering voice.

A family representative who read the late Prof Plange-Rhule’s biography described the renowned doctor as gentle, humble, kindhearted, lovable and a peacemaker.

“He executed whatever was entrusted to him diligently. He always believed that whatever must be done must be perfectly done. He was so caring, and exceptionally  helpful. He was the eye of the family.

“His demise is a big blow to the family. The vacuum his death has created is so deep and the pain his death has caused is unbearable,” she said in tears that could only be heard in her trembling voice.

In a sermon, the officiating minister said  while death at any age was sad because severing a long relationship was difficult, in grief Christians should remember to place their hope in God.

He said it was unfortunate that people today chased vanity more than serving God and helping others.

“Human life is transient. Death will come one day, either at old or young age. If that is the case, what is the essence of the arrogance, the power-grabbing, holding grudges, corruption, cheating, victimisation and winner takes all. We are sojourners on this earth, and will go back with nothing. COVID-19 has exposed to us that the material things we hold dearly cannot save us.

He said Prof Jacob Plange-Rhule lived a life worthy of emulation for the difference he made in the life of his family, friends and all those who had an encounter with him.

“His life was a life of service, he partnered God to save others, just like most medical doctors, “he said. 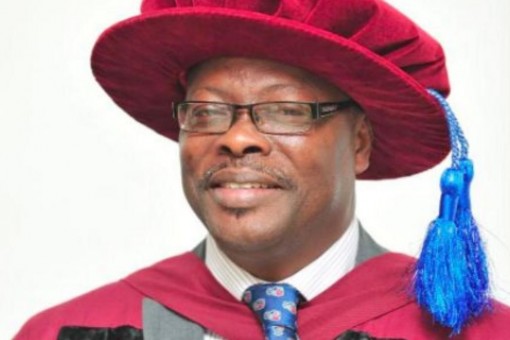 The 62-year-old died at the University of Ghana Medical Centre.  He was born on July 27, 1957, in Winneba in the Central Region.

After losing his father at age two, he moved to Accra to live with his elder brother, William and his wife caroline. After elementary education at the Mamprobi and later Kaneshie Local Council school in the 1970s, he entered Accra Academy where he had his O and A levels.

He proceeded to the Kwame Nkrumah University of Science and Technology where he graduated with a Bachelor of Medicine, Bachelor of Surgery (MB ChB) from the School of Medical Sciences in 1984.

He returned to Ghana in 1993 as a lecturer at the KNUST Medical School, where he taught and also practised at the Komfo Anokye Teaching Hospital. His decorated medical career will later lead him elected as the Ghana Medical Association.

Prof Plange-Rhule, while President of the GMA was one of the leading advocates postgraduate training for medical professionals in Ghana, an effort that led to the establishment of the Physicians and Surgeons College, which he would eventually head.

He left behind a wife and three daughters.