It comes a day after theghanareport.com reported 2,589 fatalities for 2020, according to provisional data from the National Road Safety Authority (NRSA) and the Motor Traffic and Transport Department (MTTD) of the Ghana Police Service.

The incident occurred around midday, and the Kia truck of the mourners, with registration number AS 9520-18, landed in a nearby bush.

The bodies and the injured persons were sent to the St. Francis Hospital at Assin Fosu.

An ambulance from the hospital was dispatched to the accident scene to transport the bodies. 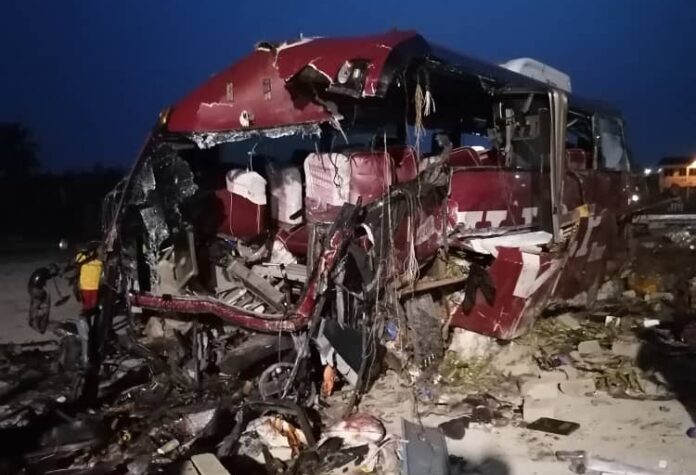 Several passengers who sustained various degrees of injuries were also rushed to the Suhum Government Hospital for treatment.

One of the buses heading towards Kumasi did a wrongful overtaking, and the VIP bus driver heading in the opposite direction attempted to swerve.

The VIP bus veered off the road, but the bus that had done the overtaking could not anticipate the VIP bus driver’s action and drove to the same lane resulting in a head-on collision.

Personnel from the Ghana National Fire Service and the Ambulance Service responded to the accident and conveyed the bodies to the mortuary.

The police were also involved in directing traffic.

Personnel from the three institutions were dispatched from Suhum, Kyebi, and Bunso.

Unlike previous years, motorcycles were involved in the most fatalities, with 1,056 deaths and 4,684 injuries from  5,684 motorcycle crashes.

A year before, there were 4,643 motorcycle accidents which contributed to 732 deaths and 3,474 injuries.

This represented a 10% rise in the number of vehicles involved from 8,489 in the previous year.

Bus, minibus, truck and taxi are some vehicles classified for commercial use.

Out of this came the least fatalities and injuries of 569 and 3,240 respectively.