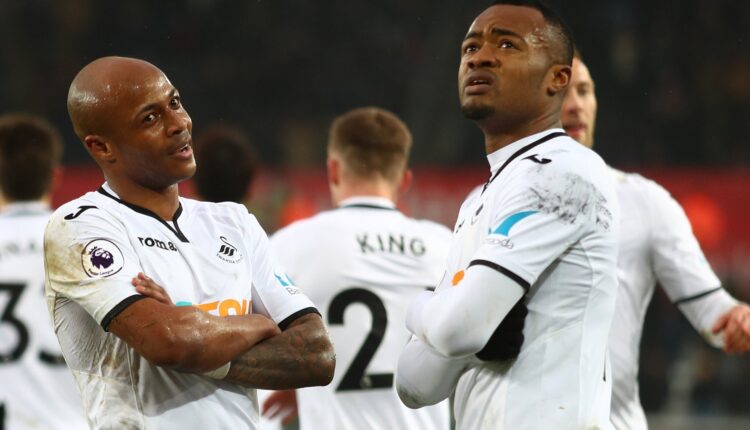 Football dynasties: Meet the 16 sons taking after famous dads on the pitch

For all kids, fathers are like the superheroes they see in their favourite  movies with millions of them desiring to follow in their parents’ footsteps when they grow up.

The trend is not different in football.

To cheer one’s father as he exhibits great performance on the field of play is fun but what makes it more exciting is how well the child manages the pressure their family name brings in football.

As toddlers, they are seen in videos exhibiting the family trait.

Funny as some may look, a few have already made a name for themselves in their youthful stages.

A number of them successfully made their professional debuts even before turning 18.

Here are 16 footballers currently playing in the top flight across the globe, proving they can fill the talented boots of their fathers and even do more. 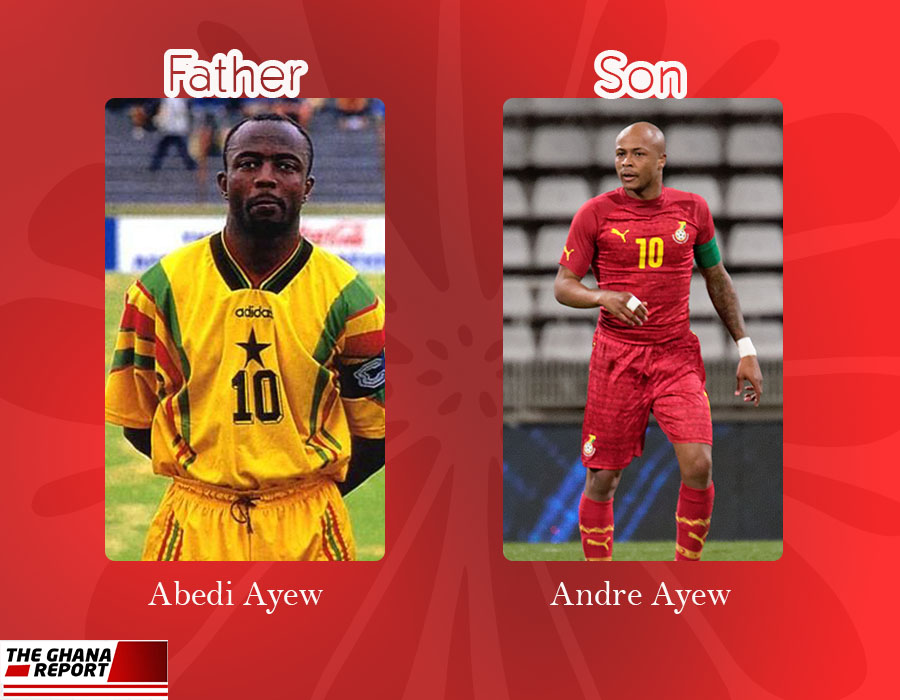 Fact: In 2007, he made his international debut for Ghana in a friendly match against Senegal on 21 August, coming on as a late-match substitute. He is the current captain of Black Stars.

Father: Abedi Ayew was one of the first African players to make an impact on European club football playing for Lyon, Torino, 1860 Munich and French gaints Marseille where he won the UEFA Champions League.

Even though he never played in the World Cup unlike his sons (Rahim, Andre & Jordan), he was arguably the most dominant figure on the African football scene for nearly a decade and was adjudged the African Best player in 1982. Capped 73 times and scored 33 goals for Ghana. 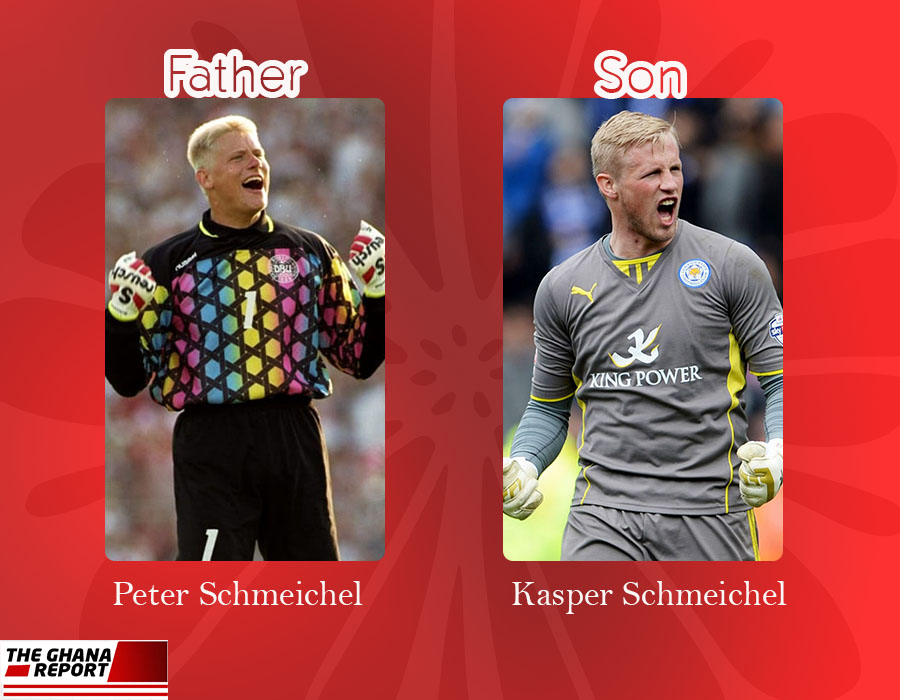 Fact: He won the Premier League title as Leicester city captain in 2016.

Father: Peter Schmeichel is regarded as one of the greatest goalkeepers of all time, winning most trophies of his time including the Champions League and Super Cup. He played for teams like Manchester United, Aston Villa, Manchester City and made 129 appearances for the Denmark national team. 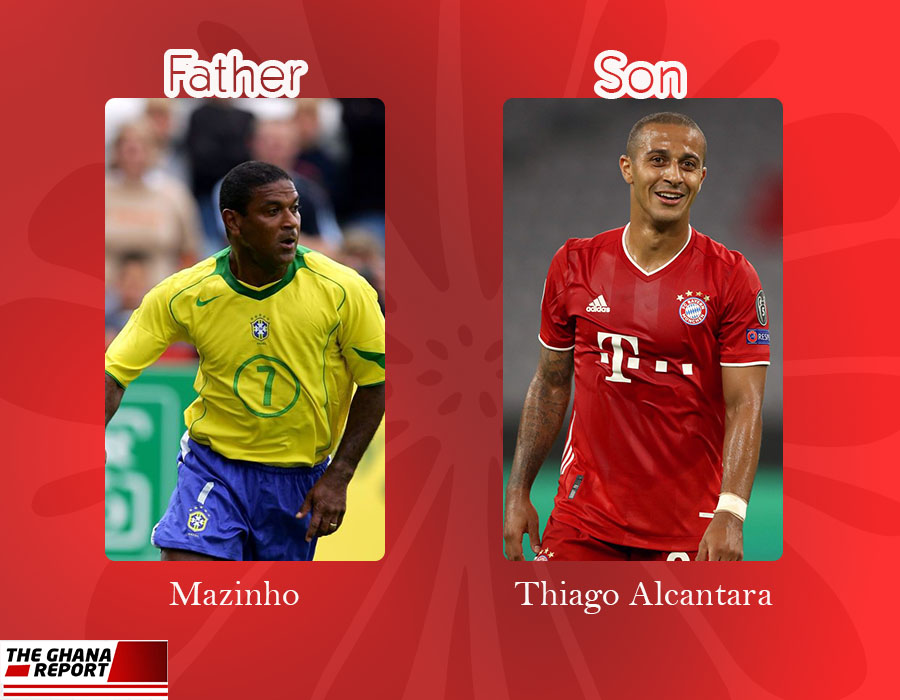 Fact: He has made 43 appearances for Spain and scored twice since making his debut in 2011.

Father: Mazinho won the World Cup and the Copa America with Brazil and managed to set a pretty high-standard with his performances on the pitch during his days as a footballer and holds an upper hand when it comes to achievements on the international stage.

He made 35 appearances for the Brazil national team. 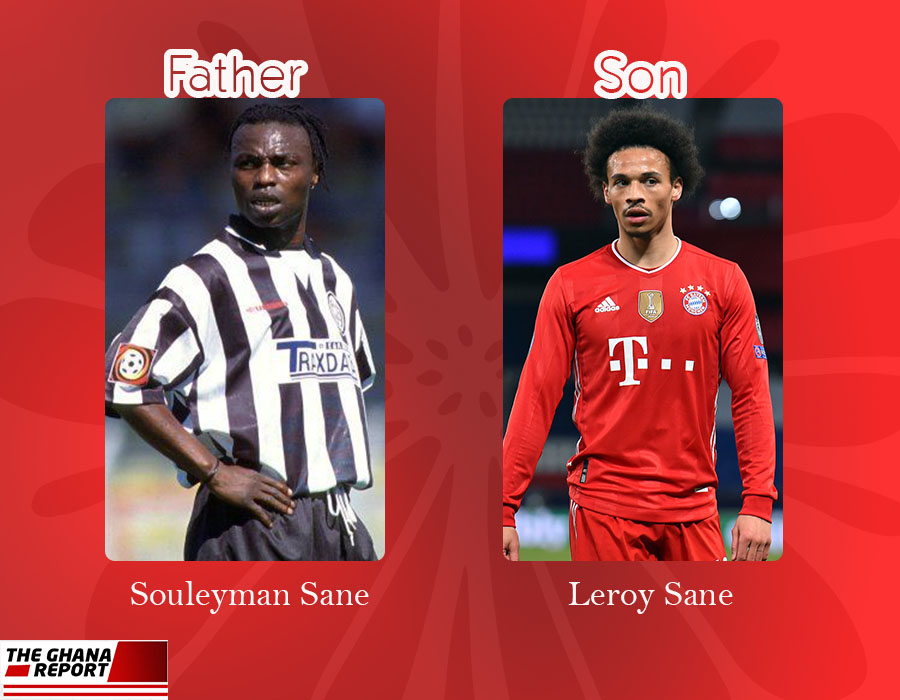 Fact: Sané received his first senior call-up to the German senior team on 6 November 2015 in a friendly against France.

Father: Souleymane Sané is a Senegalese born who spent most of his playing career in Germany where scored 51 goals in 174 German top-flight appearances.

He scored 29 goals for Senegal in 55 appearances. 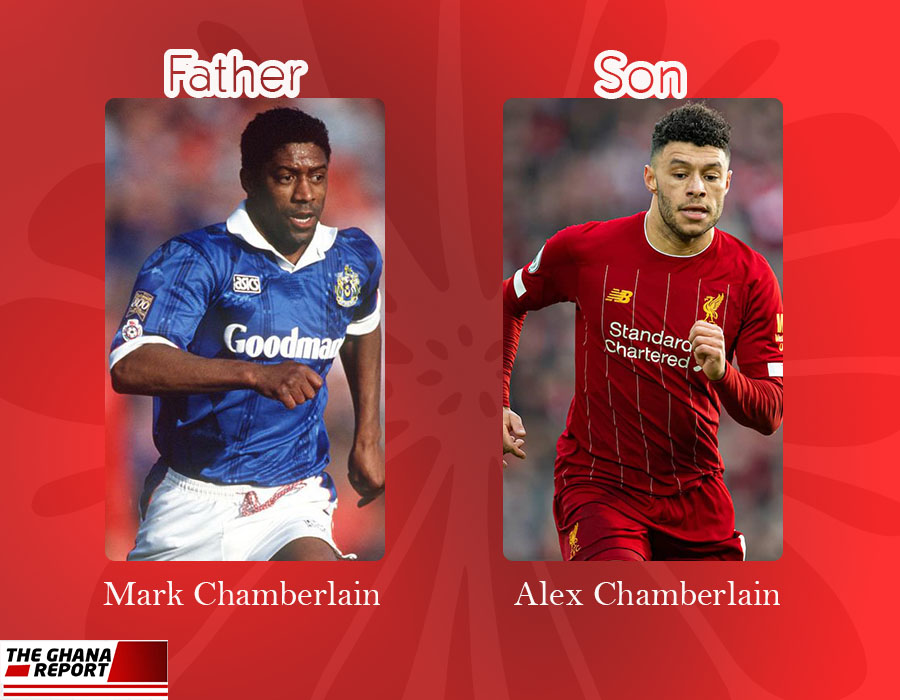 Father: Mark Chamberlain broke into the England senior squad during his first season at Stoke City, scoring on his debut against Luxembourg at Wembley on 15 December 1982, at age 21.

He was described as a pacey winger with excellent ball control, he was capped 8 times and scored one goal. 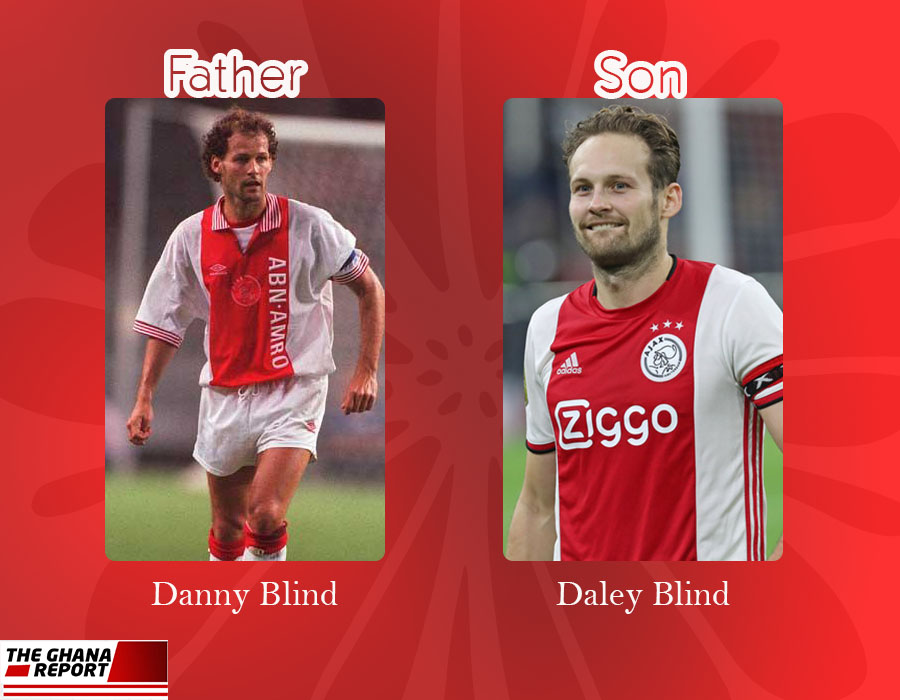 Fact: Blind has made 79 appearances for the Netherlands senior team since making his debut on 6 February 2013.

Father: Danny Blind holds a legendary status in Dutch football. He was an important player for Ajax, spending 13 years at the club, picking up 16 major honours, which included five Eredivisie titles, UEFA Champions League and the UEFA Super Cup among other accolades. 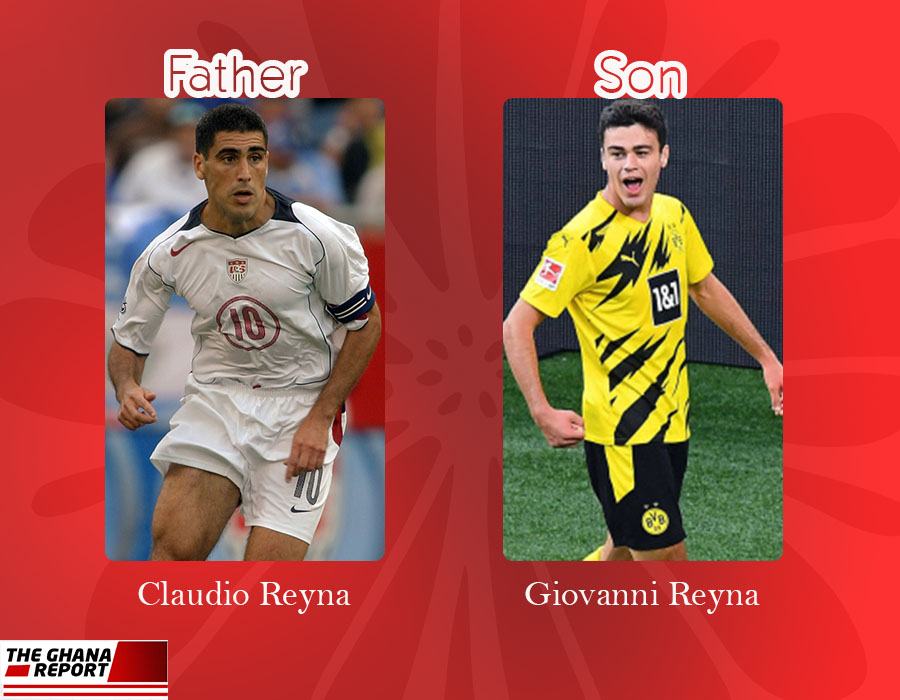 Fact: Reyna made his senior national team debut against Wales 0n November 12, 2020, a day before his eighteenth birthday.

Father: Claudio Reyna is widely considered one of the greatest players the United States has ever produced and played for the likes of Bayern Leverkusen, Rangers and Manchester City. His last league appearance was in the USA Major League when he was the captain of the New York Red Bulls.

He made 112 appearances for the USA and scored 8 times. 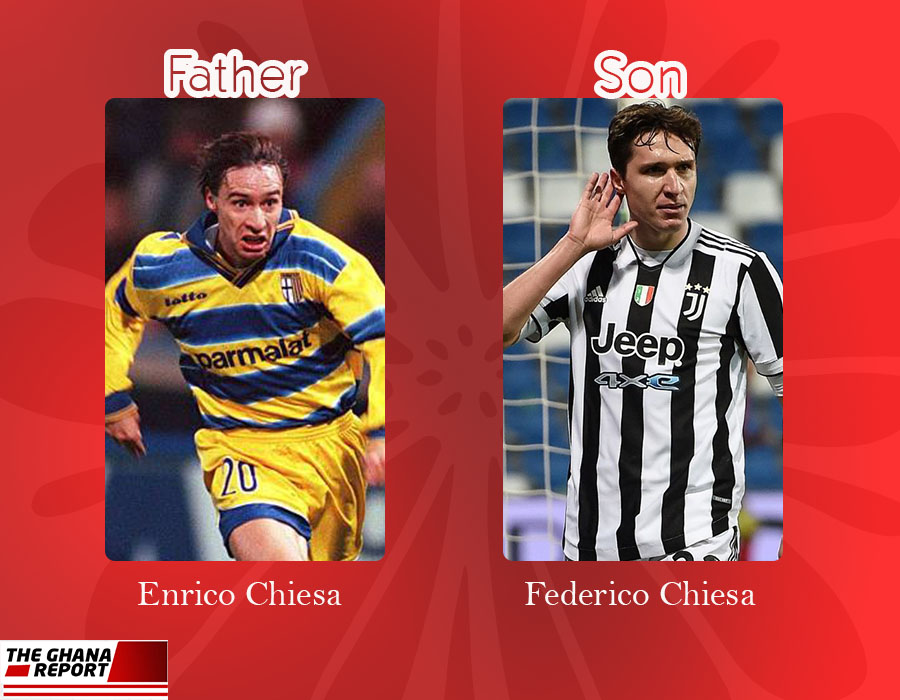 Fact: Federico had his first debut in a friendly against Argentina in 2018 and has picked 26 caps.

Father: Enrico Chiesa is considered one of the most exciting and dynamic strikers in Italy during the mid-’90s, spent three years at Fiorentina between 1999 and 2002, winning the Coppa Italia. 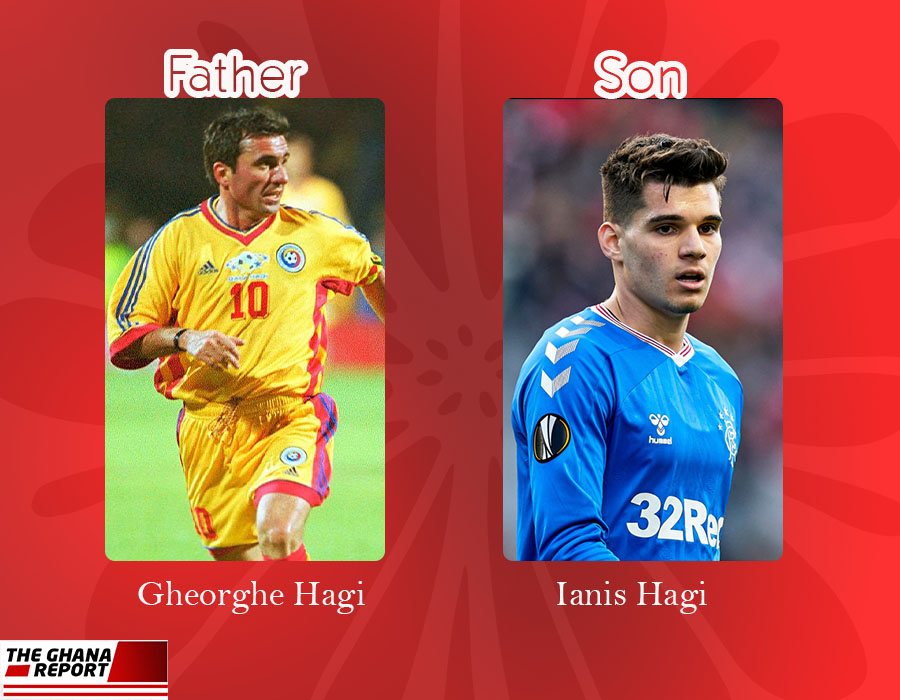 Fact: In 2018, Hagi made his senior debut for Romania in a 3–0 UEFA Nations League win over Lithuania, coming on as a 68th-minute substitute for Claudiu Keșerü and has since made 18 appearances and scored one.

Father: Gheorghe Hagi is a Romanian football legend who had spells with both Real Madrid and Barcelona and won numerous league titles at Galatasaray and Steaua Bucharest.

On an international level, Hagi won 125 caps for Romania and is the country’s joint-top highest goalscorer with 35 goals (level with Adrian Mutu). 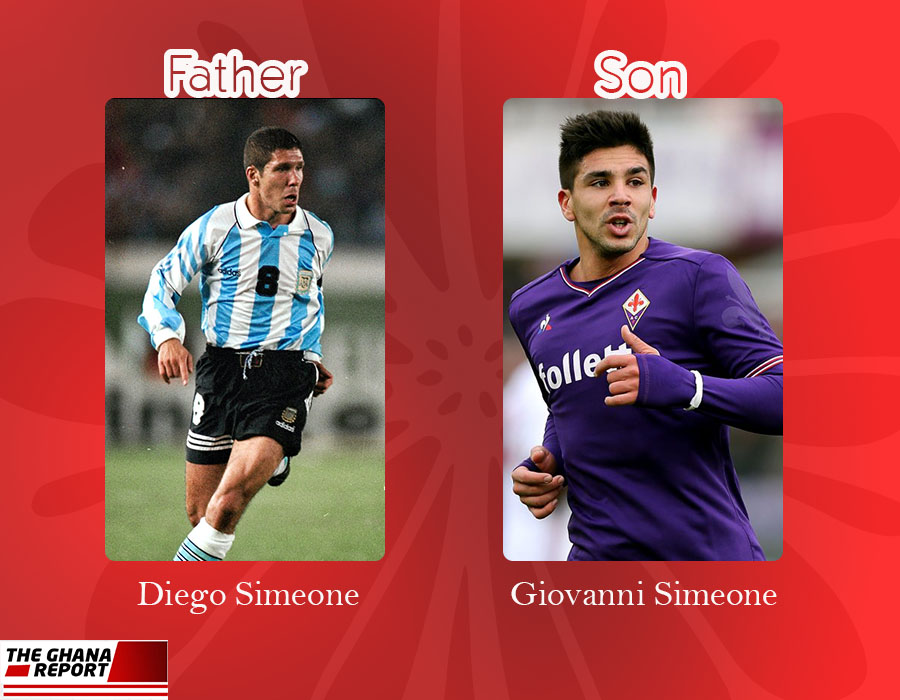 Fact: Simeone scored on his senior international debut, in a 3–0 friendly win over Guatemala in Los Angeles.

Father: Diego Simeone played in Argentina, Italy, and Spain for teams that include Vélez Sarsfield,  Sevilla, Atlético Madrid, Inter Milan and Lazio, winning most competitive trophies both domestic and across Europe. 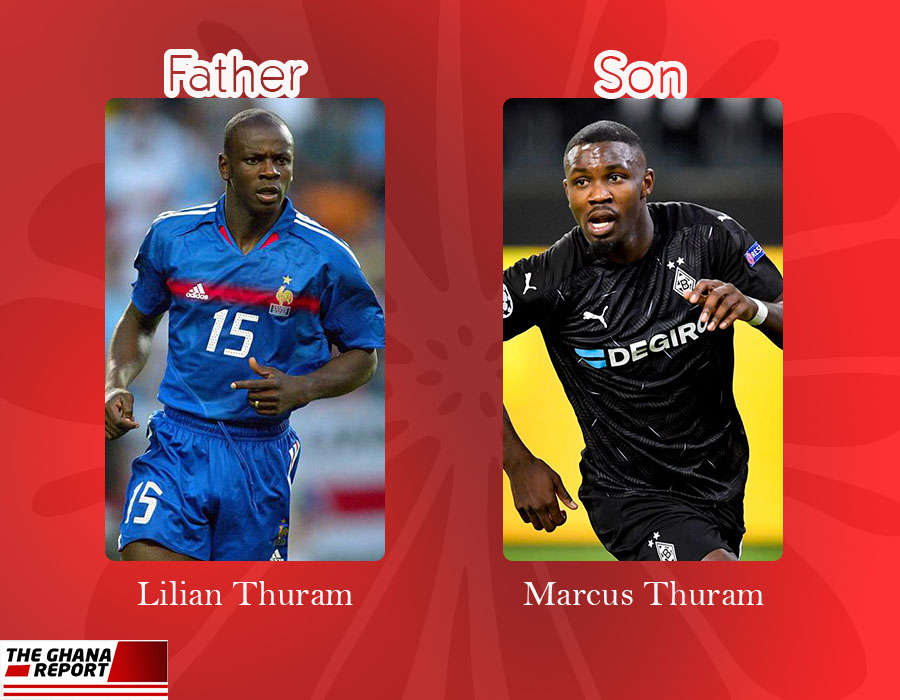 Fact: He made his senior debut for France on 11 November 2020 in a friendly against Finland.

Father: Lilian Thuram is considered a legend and retired as the most-capped player in the history of the France national team with 142 appearances between 1994 and 2008, winning the 1998 World Cup and 2000 European Championships.

As a defender, Lilian spent a large part of his club career playing in Italy with Parma where his son Marcus was born and then moved to Juventus. 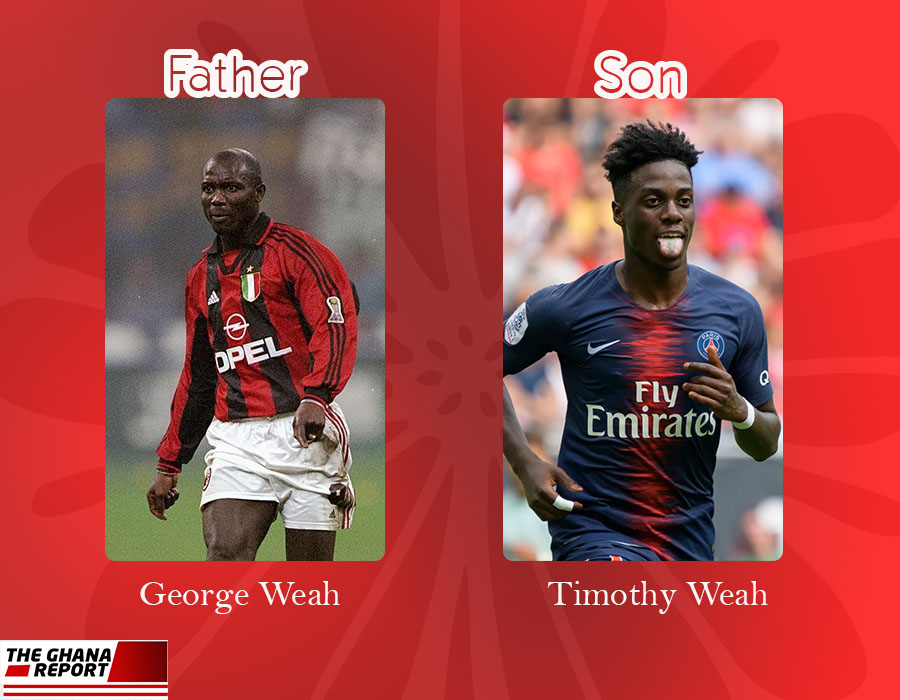 Fact: He was the first player born in the 2000s to earn a senior cap and the fourth-youngest player to score for the United States.

Father: George Weah who is the current president of Liberia made a successful career in football and won several national and international honours,  The two times African Footballer of the Year Award made his name as a centre-forward with PSG, winning all that was on offer domestically, as well as the 1995 Ballon d’Or. 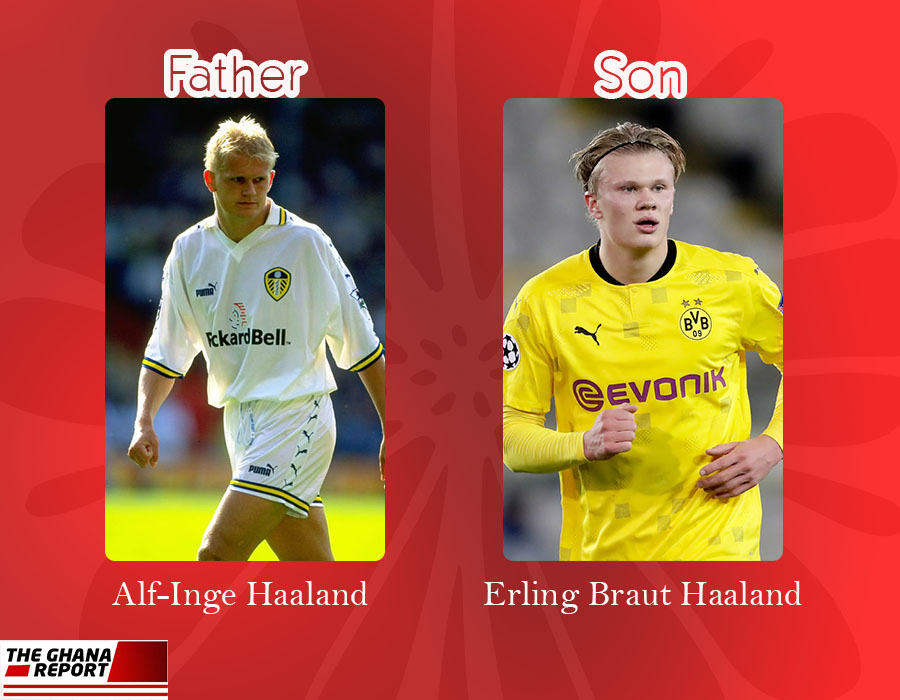 Fact: He has made 12 appearances for the Norwegian national team and scored an impressive 7 goals.

Father: Alf-Inge Haaland enjoyed a fine career in England with Nottingham Forest, Leeds United and Manchester City before his career was brought to a premature end following a bad tackle on him by Manchester United’s Roy Keane.

He made 34 appearances for Norway. 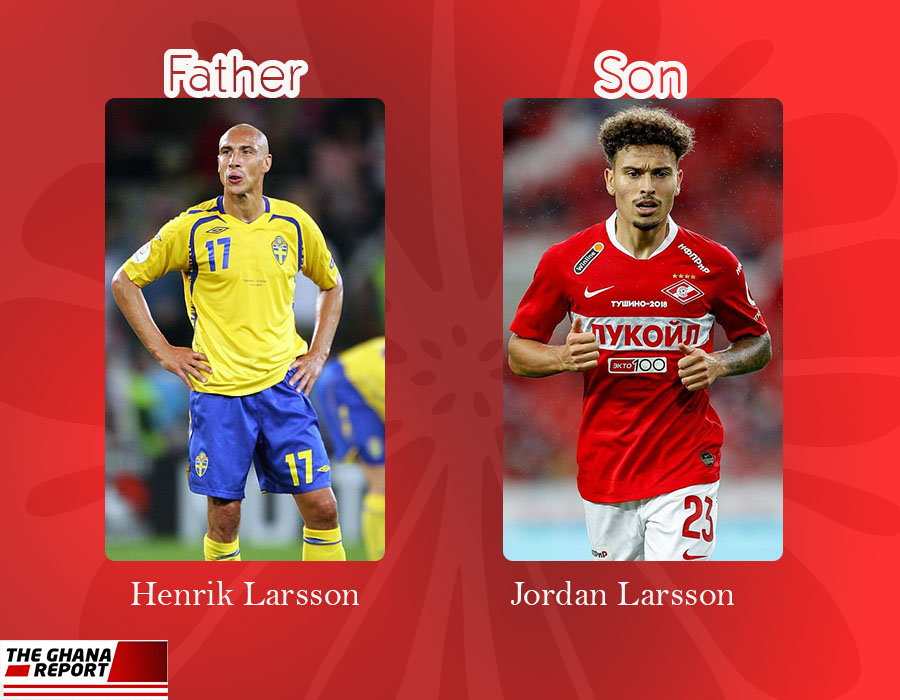 Fact: On 7 January 2018, he made his debut for the senior national team playing 64 minutes in a 1–1 friendly draw with Estonia in Abu Dhabi.

He made 106 appearances for Sweden and scored 37 goals. 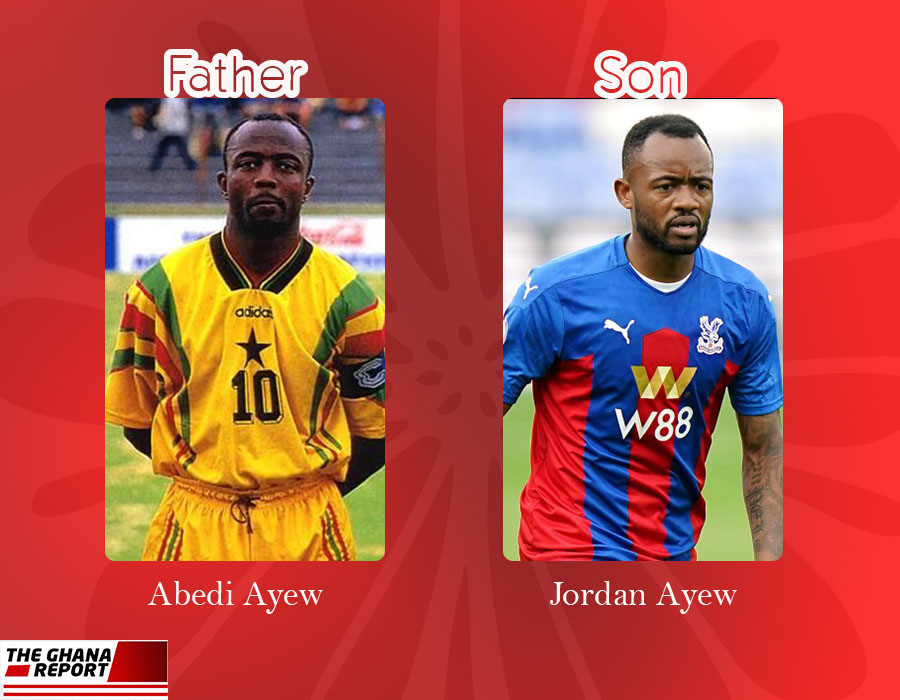 Fact: Ayew made his first senior appearance for Ghana on 5 September 2010, in a 3–0 2012 AFCON Qualification match win against Swaziland and has scored so far 18 times for the Black Stars.

Father: Abedi Ayew was one of the first African players to make an impact on European club football playing for Lyon, Torino, 1860 Munich and French giants Marseille where he won the UEFA Champions League.

Even though he never played in the World Cup unlike his sons (Rahim, Andre & Jordan), he was arguably the most dominant figure on the African football scene for nearly a decade and was adjudged the African Best player in 1982. Capped 73 times and scored 33 goals for Ghana. 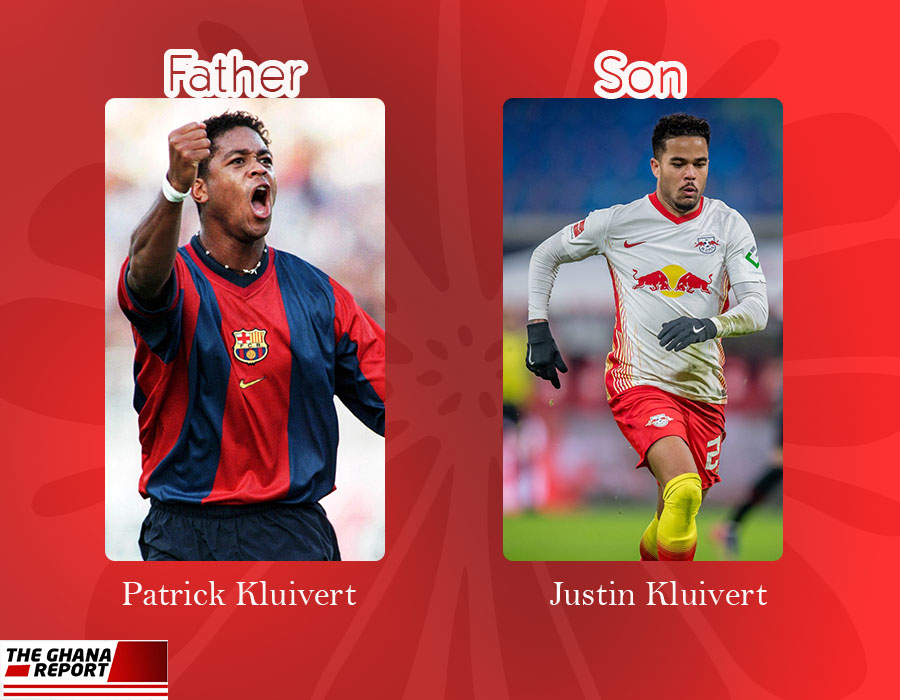 Father: Patrick Kluivert, a former Ajax and Barcelona striker is widely regarded as a football icon in the Netherlands and around the world, scoring 199 club career goals, while winning titles in Spain and the Netherlands, including the Champions League with Ajax in 1995.