Story By Dave Alamisi On May 3, 2020
Share
Minister for Information, Kojo Oppong Nkrumah

The government has acknowledged the work of journalists on World Press Freedom Day, celebrated every year on May 3.

On behalf of the government, Minister of Information, Kojo Oppong Nkrumah, conveyed “the significant role the press is playing in the ongoing COVID-19 pandemic” via a press statement.

The release said the government was working together with the media to defeat the COVID-19 that has infected 2,169 with 229 recoveries. Unfortunately, 18 have succumbed to the disease and died less than two months after the country recorded its first cases.

This year’s World Press Freedom Day celebration is under the theme: Journalism without Fear of Favour”.

But anti-corruption journalists have come under a barrage of criticisms, harassment and death threats, with some losing their lives.

The likes of theghanareport.com’s Manasseh Azure Awuni, Edward Adeti, and undercover journalist Anas Aremeyaw Anas have suffered various forms of attack in the line of duty.

Others like Tiger Eye PI’s Ahmed Hussein Suale have paid with their lives and the perpetrators of the gun attack that claimed the life of Anas’s associate have still not been brought to book, more than a year after the incident occurred.

He died on January 16, 2019, when unidentified men on motorbikes shot him three times, twice in the chest and once in the neck in his vehicle.

Below is the statement from the government: 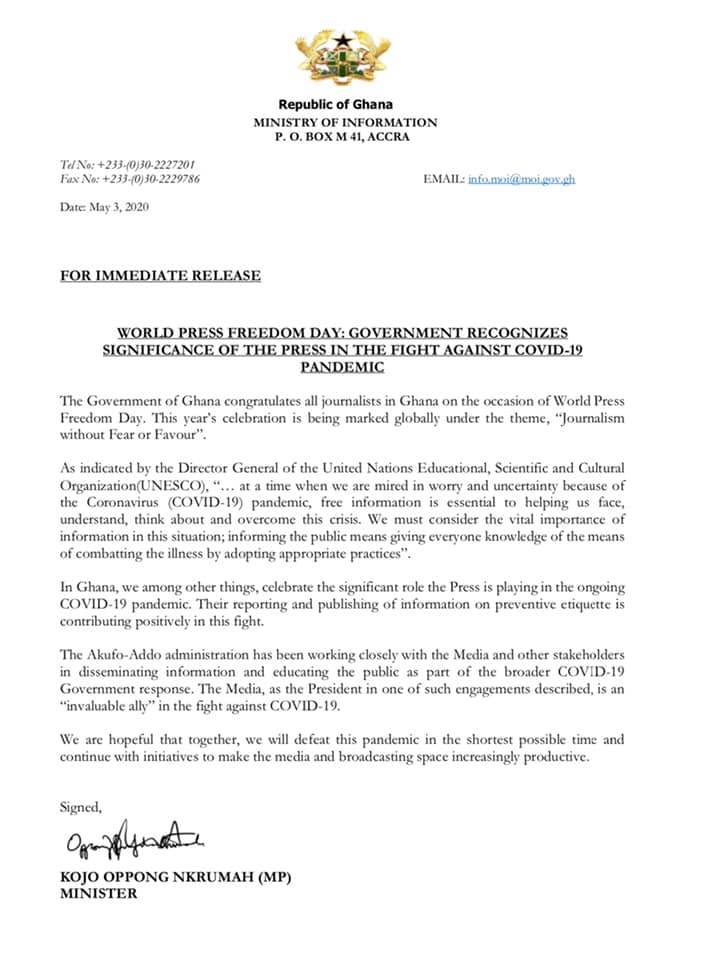