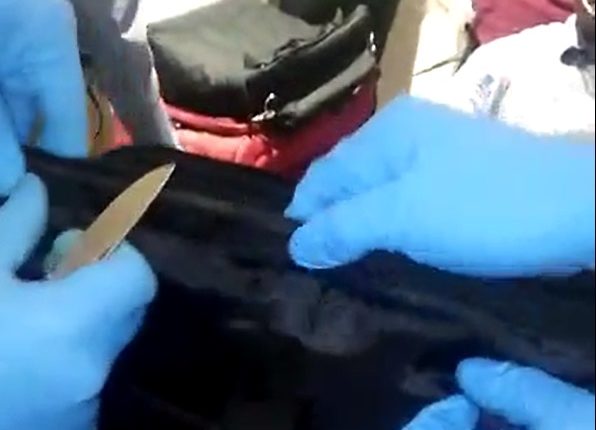 ‘I was promised GH¢8,600’ – Taxi driver who vomited cocaine at Kotoka Airport confesses

A Ghanaian taxi driver based in the Netherlands has been busted at the Kotoka International Airport (KIA) for allegedly trafficking a narcotic substance.

Officials of the Airport’s Narcotics Control Board (NACOB)  made this known to the Daily Graphic which published the story in its Thursday edition.

The report said that the suspect, 52-year-old Oppong Kwaku Owusu, was arrested at the Airpot’s departure hall while going through departure formalities to board a flight back to his base, in the Netherlands.

He was pulled aside by NACOB officials on suspicion of having ingested some foreign substance.

Officials, not convinced with the said response from Mr. Owusu, carried out a search and found three large parcels of a substance suspected to be a narcotic drug.

“The carry-on bag was opened and searched in Owusu’s presence and three parcels of a powdery substance suspected to be cocaine were found concealed in a compartment of the bag,” the Head of Communications, Media Relations and Protocol of NACOB, Francis Opoku Amoah indicated.

Realizing he had been busted, officials said,” Mr Owusu broke down and confessed that he had swallowed some pellets of cocaine.”

He was then placed under close observation by NACOB officials, and he eventually managed to expel all the 100 thumb-sized pellets of a powdery substance suspected to be a narcotic drug which he had swallowed.

According to officials, “the powdery substance tested proved to be positive for cocaine, a narcotic drug.”

Mr. Amoah also revealed that the suspect had two passports – a Ghanaian passport No. G2563315 issued in Accra and a Kingdom of the Netherlands passport No. NYD.

Giving a vivid account in his caution statement, the suspect said while working as a taxi driver in the Netherlands, he was contracted by one Alhaji, also a Ghanaian resident in Amsterdam.

“Alhaji convinced me to come to Ghana and carry some drugs to the Netherlands for a fee of €1,500,” the suspect confessed how it all started.

He claimed that the said Alhaji paid for his ticket but declined to give full details of all his contacts on arrival in Ghana.

The way forward, Mr. Amoah said his outfit would forward the three parcels found in the carry-bag and the 100 expelled pellets of a whitish powdery substance to the Ghana Standards Authority (GSA) for analytical examination and report.

The suspect was put before court February 20, 2020, and has been remanded in prison custody to reappear on March 2, 2020.

Mr Amoah, has assured that the Airport’s Board would continue to collaborate with other stakeholders to make Ghana unattractive to drug traffickers.