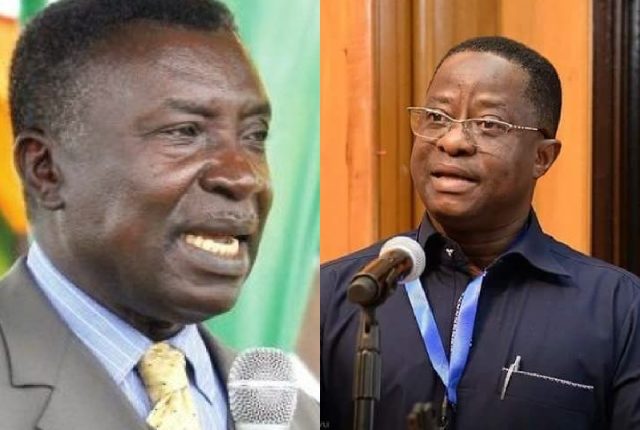 Party leaders of the largest opposition’s stronghold want the Minister of Environment, Science, Technology, and Innovation, Prof Frimpong Boateng and former Minister of Lands and Natural Resources, Mr Amewu, who played leading roles in the fight against illegal mining to be interdicted immediately.

Reports that excavators seized at illegal mining sites appear to have given the NDC a shot in the arm to demand that the law deals with Mr Amewu, who was Lands and Natural Resources Minister when the fight against illegal mining begun in 2017, and Prof Frimpong Boateng, who is currently the Chairman of the Inter-Ministerial Committee on Illegal Mining.

The committee, launched in 2017, was to lead efforts to clamp down on illegal mining. But there appears to more questions about its work than answers.

The NDC  group also wants President Akufo-Addo to render “an unqualified apology to security services, the media and all those whose excavators were inhumanely set ablaze and other properties worth millions of dollars confiscated.”

The groups’ demands come in the wake of the missing excavators’ scandal which has led to the arrest of the suspended Vice Chairman of the governing New Patriotic Party (NPP) in the Central Region, Ekow Ewusi, and others.

The group, in a letter signed by the Regional Secretary, James Gunu, said it is alarmed by the scandals that bedevilled the Akufo-Addo government.

“We are saddened by the unfolding drama of thievery, surrounding the missing 500 excavators seized, during the much-trumpeted galamsey operations dubbed Operation Vanguard, ” excepts of the statement available to theghanareport.com read.

The Volta NDC, in addition to the interdiction, emphasised on other demands that need to be implemented.

It wants “a full-scale bi-partisan investigation into the scandal, prosecution of all the culprits to serve as a deterrent to other corrupt government appointees, urgent retrieval of all seized excavators and same given back to the state, proper inventory and accounts of all the confiscated assets of the illegal miners.”

According to the group, the fight against galamsey was a ploy by the government to amass wealth for the NPP government officials.

“What has become crystal clear to the discerning Ghanaians today is that much of the political gymnastics they saw in the news regarding the fight was just a calculated and well-choreographed corrupt agenda to mine money for the NPP government officials.

“The truth is, the Akufo Addo-led government has no conscience and sympathy for the environment let alone the dubious pious claims to protect our water bodies and vegetation, ” it argued.

Read the details of the press statement here