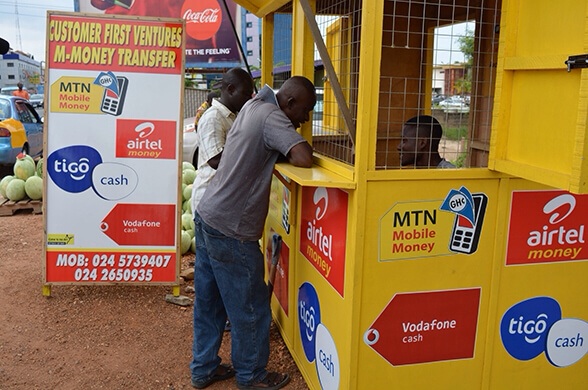 The Association of Mobile Money Agents has threatened to withdraw its services from Thursday, 23 December 2021, over the controversial e-levy proposition.

The intended strike is to register their displeasure with the government’s proposed 1.75 E-levy, captured in the 2022 Budget and Economic Policy read by Finance Minister Ken Ofori Atta.

The union said this new directive is regressive and detrimental to business, and thus urged its members to comply with the industrial action.

The union through its General secretary Evans Otumfuo said, “We see this levy as very regressive and critical to the survival of our businesses. Consequently, as part of our demonstration on Thursday, 23 December 2021, our services as mobile money agents will not be accessible across the country.”

Further, the statement said all mobile money agent stores shall remain closed on Thursday in a bid to send a message to the government.

The statement comes after the government abolished all road tolls and replaced them with a 1.75% electronic transaction levy.

This move, the Finance Minister explained is aimed at boosting domestic tax mobilization efforts to infrastructure needs to accelerate economic transformation and safeguard efforts being made to enhance financial inclusion and protect the vulnerable.

All transactions that add up to GH¢100 or less per day (which is approximately GH¢3000 per month) will be exempted from this levy.

A portion of the proceeds from the E-Levy will be used to support entrepreneurship, youth employment, cyber security, digital and road infrastructure among others.

The new policy is expected to come into effect from 1st February 2022. 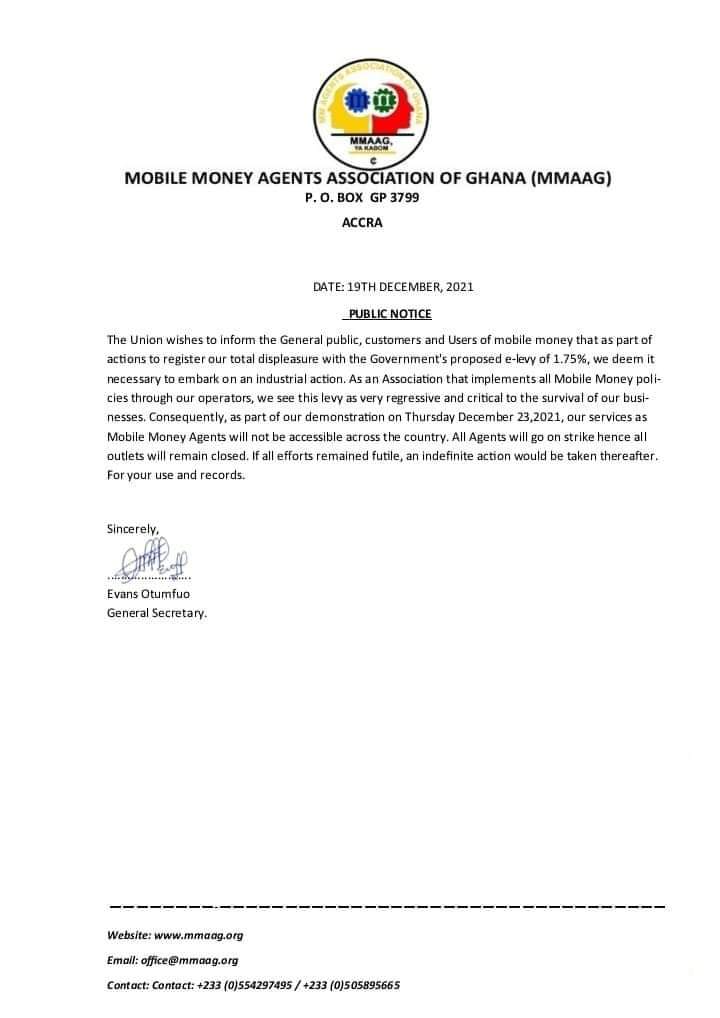 The Minority and the Majority are sharply divided over the levy and its implications for financial inclusion and the cash-lite society agenda.

The Minority has said it will do all it can to ensure that the bill does not see the light of day, insisting it is not in the best interest of Ghanaians.

However, the Majority has maintained that the levy will help the government raise the needed revenue to meet the infrastructural demands of the country.

Parliament will convene later today, Monday, December 20, 2021, to either approve or reject the controversial e-levy.

Discussions on the proposed levy

The Ghana National Chamber of Commerce and Industry (GNCCI) called on the government to reconsider the decision to impose a 1.75% levy on mobile money and other electronic transactions in the country.

The chamber maintained that the proposed levy would further worsen the plight of businesses particularly small and medium enterprises (SMEs) which were mainly growth-driven and susceptible to economic and market cycles.

It said to increase revenue, the government should rather focus on finding innovative ways of widening the tax net, ensuring tax compliance, as well as addressing the rising levels of tax exemptions which did not commensurate business growth.

Even though C-nergy is not entirely opposed to the levy, they hold the opinion that “the 1.75% E-Transactions levy rate is high”.

Analysts from the firm are of the belief that the scope and coverage of the levy are wide enough to generate the targeted revenues “if it is monitored and managed effectively”.