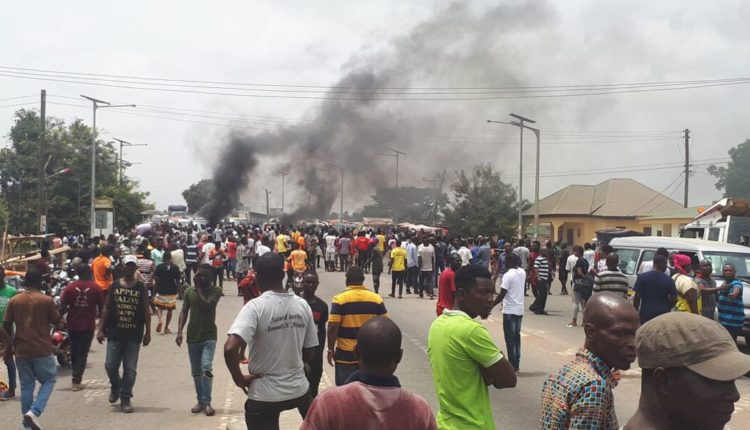 Three people have reportedly been injured after police ‘aimed’ their guns at angry protesters in the South Tongu District of the Volta Region on Monday.

Bullets from armed police hit the three people in the leg, arm, and back.

This was after spontaneous protesters besieged the police station over the callous murder of an Assemblyman last Sunday.

The residents have demanded that the police produce the Assemblyman’s killers in three days.

Mourning the murder of Marcus Mawutor Adzahli, they blocked the road, burnt tyres and raided the police station.

The police, in an attempt to disperse the angry residents who had besieged the police station, fought back.

That was when the shots were fired.

Recounting happenings of the protest on Citifm’s Eyewitness News, monitored by theghanareport.com, Umaru Sanda Amadu, said he would not want to categorize the shots as ‘stray bullets’.

“I do not want to describe them as stray bullets because they were directly targeted. I had to flee…my cameraman had to run, my producer had to run,” he explained.

“You could see the nostril of the gun pointed at you and then you hear the gunshots. It wasn’t one gunshot, it was more than 20. Some were fired in the air but a lot of them were fired into the crowd.”

He is convinced the police could have acted more professional under the given circumstances.

The Assemblymember for Sogakope South, Marcus Mawutor Adzahli was shot and killed by suspected robbers at his residence Sunday dawn.

Reports say the victim fought back the suspects, numbering eight with one of them in a hood when tried to snatch his safe away.

Several calls by the victim to the police went unanswered as the robbers spent about 45 minutes trying to break into his house, reports noted.

According to eyewitnesses “they used cement blocks and broke down his bulletproof and burglary proof doors, entered his home, and shot him several times; dismembering his body in gory fashion and of course, killing him”.

Other reports suggest neighbours were awoken by the loud gunshots at his residence but were scared and defenceless in the circumstances.

One of the assailants was reportedly wearing a mask while the rest were bare-faced.

The wife and a child of the deceased were also injured and are currently at the emergency care at the Sogakope District Hospital.