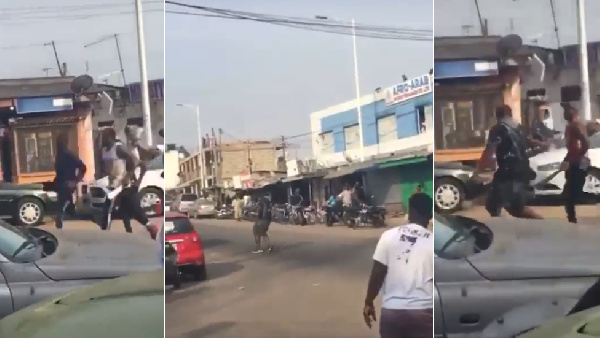 Seven suspects arrested for their involvement in the violence at Nima on Tuesday, 18 January 2022, have been remanded into police custody.

On Friday, the accused persons were hauled before an Accra Circuit Court presided by Rosemond Baah Torsu.

They pleaded not guilty to charges of rioting and causing harm.

Counsel for the accused persons maintained that their clients had nothing to do with Tuesday’s gun violence.

They assured the court that they had evidence to prove the accused persons were not at the scene at the time of the unfortunate disturbance.

Praying for bail for the accused persons, a lawyer, Seth Gyapong Oware, disclosed to the court that his client, Bashiru Ganiru, was an innocent person who tried helping casualties of the shootings but was rather arrested and accused.

He said some community members called upon the accused person to convey the injured persons with his car to the hospital, and it was in the process that he got arrested.

A search was subsequently conducted in his car and house, and no weapons were found.

Counsel for two accused persons, Yaw Dankwa, also said his clients were arrested from their farm and wondered why the police could link them to the violence.

The court, however, denied them bail, saying it was early days yet, and the police were yet to demonstrate any undue delays.

Meanwhile, the court has ordered the police to investigate the alibi of the accused persons before the next court date, 1 February 2022.

On 19 January, police arrested seven suspects for their involvement in the violence at Nima on Tuesday, 18 January 2022.

Five of the suspects are in police custody at the headquarters of the Ghana police, while two are receiving treatment for injuries under police guard.

One injured victim, Appiah, who was shot during the incident, is currently responding to treatment at the 37 Military Hospital.

Violence erupted at about 3:30 pm as dozens of young men engaged in a free-for-all fight with guns, machetes, clubs and knives, leaving several people seriously wounded.

Other suspects are being pursued at Nima, and its environs and the police have stressed their commitment “to get them arrested to face justice”.

According to the law enforcement agency, the clash was triggered by two gang leaders – Kumordzi, alias Ibrahim Hussein and Bombon, alias Ali Awudu.

“They are rivalry groups that never agreed on issues, and today [Tuesday], they went all out on the open streets of Nima,” Director-General of Police Public Affairs, ACP Kwesi Ofori, explained.

“We have nipped the violence in the bud. We are in control and would like to let the people know that the police are there at Nima to protect lives and property, and we will not give room for such criminals to disturb the peace and security of Nima”.

Some items have been retrieved, including ammunition, spent bullet shells and adapted implements to cause harm and injury.

The cause of the chaos is not immediately known, but videos shared on social media contained violent scenes akin to a war zone.

Gunshots could be heard in some of the videos as passersby screamed and ran for cover.

Dozens of police dressed in full riot gear wear deployed to the area.