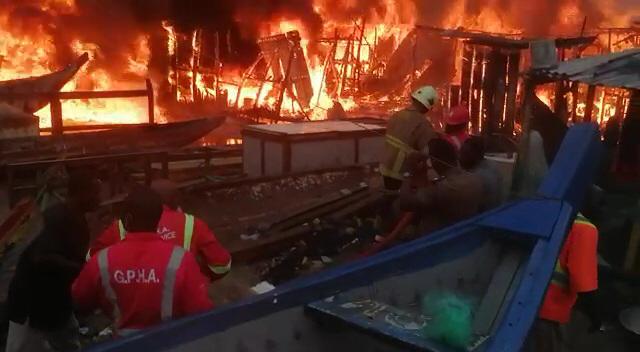 Over 30 shops gutted by fire at Kumasi Central market

On April 19, 2021, 6:17 AM
Share
Parts of the Kumasi Central Market was engulfed in fire on Sunday evening affecting 30 shops.
The fire started around 8 pm on April 18 at a section of the market for cobblers.
Items razed by the fire include combustibles, leather, and wooden materials, and finished products running into millions of cedis.
Firefighters arrived at the scene to douse the fire around 9 pm, CitiNews reported.
A Deputy Ashanti Regional Fire Commander, ACFO Henry Gyiwah, said access to the scene was a major challenge.

“Accessibility is always a problem in Central Market… and the interference from the traders is not good,” he lamented. “They should allow us to do our work; we are professionals”.

The cause of the fire is unknown.

The Ashanti Region has recorded a number of fire outbreaks in the first quarter of the year.

Scores of wooden structures were gutted at the Dagomba Line slum which provides shelter for head porters, petty traders, scrap dealers, and some homeless people.