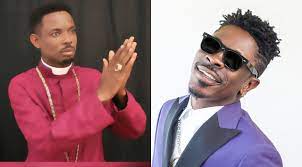 The pastor who prophesied the death of dancehall artiste Shatta Wale during an evangelism session on an Accra-based radio has been granted bail.

Bishop Stephen Akwasi, leader of New Life Kingdom Chapel International, was granted a GH¢100,000 bail by an Accra Circuit Court.
He has pleaded not guilty to the charge of causing fear and panic.
Bishop Akwasi, also known as Jesus Ahuofe, had earlier been remanded for five days after his arrest in connection with Shatta Wale’s hoax shooting.

Counsel for the accused, Martin Kpebu, who moved his bail application, said his client was unwell. He, however, failed to provide a medical report to support his claim.

In his plea for bail, Kpebu added that his client’s offence does not warrant detention in police custody beyond 48 hours.

“This offense is a misdemeanor so there is no reason to keep him in custody as is being done at this stage. He is a good candidate for bail at this stage and does not need to exhaust all 48 hours. What is the possibility that a whole Bishop will flee Ghana if granted bail?

“He has very strong social and economic ties in Ghana so he is well-rooted. He has employees numbering over ten. He is an opinion leader so there is no risk that an overseer will flee Ghana and not stand trial. I really do not see the reason for keeping him in custody,” he argued.

Akwasi was seen in a viral video, apparently captured in September 2021, explaining circumstances under which a”famous Ghanaian musician named Charles” would be shot. He acknowledged later that this person was Shatta Wale.

Meanwhile, the dancehall artiste Shatta Wale and his three accomplices are still in custody at the Ankaful Prisons pending a reappearance in court later in the week.