The Office of the Special Prosecutor(OSP) has begun investigations into corruption-related issues concerning illegal small-scale mining activities in the country.

In a statement issued by the OSP today, Monday, October 10, 2022, the investigation targets some officials of the Ministry of Lands and Natural Resources and the Forestry Commission.

“It also targets the activities and the expenditure of the dissolved Inter-Ministerial Committee on Illegal Mining(IMCIM), especially in respect of the seizure and management of excavators, machinery, road vehicles and gold nuggets.”

According to the statement, the probe also targets individuals and private mining companies such as Charles Bissue, the Former Secretary of the IMCIM and Akonta Mining Limited.

“The investigation further targets the activities of Akonta Mining Limited and other companies; nationals of foreign countries allegedly involved in illegal mining; and allegations of corruption and corruption-related offences against some Municipal and District Chief Executives and political party officials,” the statement concluded.

Below is the full statement: 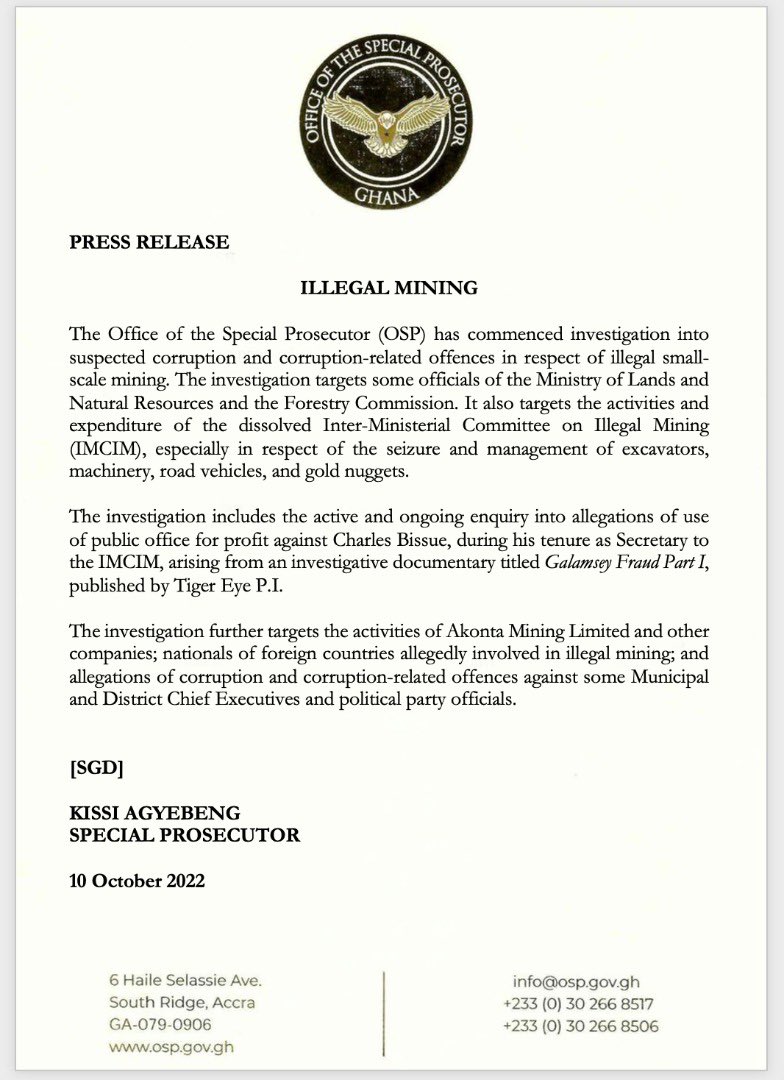 This investigation comes on the back of renewed conversations on illegal mining, also known as ‘galamsey’, and its negative impact on Ghana’s forests and water bodies.

Major rivers like River Pra, Offin and Tano have been affected by this menace as their waters have lost their natural colour.

While the government has pledged to fight ‘galamsey’ head-on, some fingers have pointed to some government officials and ruling party members as the culprits behind the destruction.

For instance, Akonta Mining Limited, a company owned by the Ashanti Regional Chairman of the New Patriotic Party (NPP) Bernard Antwi Boasiako, has been accused of mining illegally in the Tano Nimiri Forest Reserve.

Meanwhile, the president, Nana Akufo-Addo, has warned that he will not protect any appointee caught engaging in illegal mining activities in the country during a meeting with all Metropolitan, Municipal, and District Chief Executives (MMDCEs) in Kumasi.