As Ghana marks exactly three months in its fight against coronavirus, research shows that averagely, five people contract the virus every hour.

This translates into 120 cases daily and five infections every hour as authorities roll out plans to mitigate the spread and economic impact.

The total number of active cases are 6, 887. Critical cases are six with four patients surviving with the aid of ventilators. Cases described as severe are 16.

The development puts Ghana in a club of African countries with more than 10, 000 cases. These include South Africa, Egypt, Nigeria and Algeria. 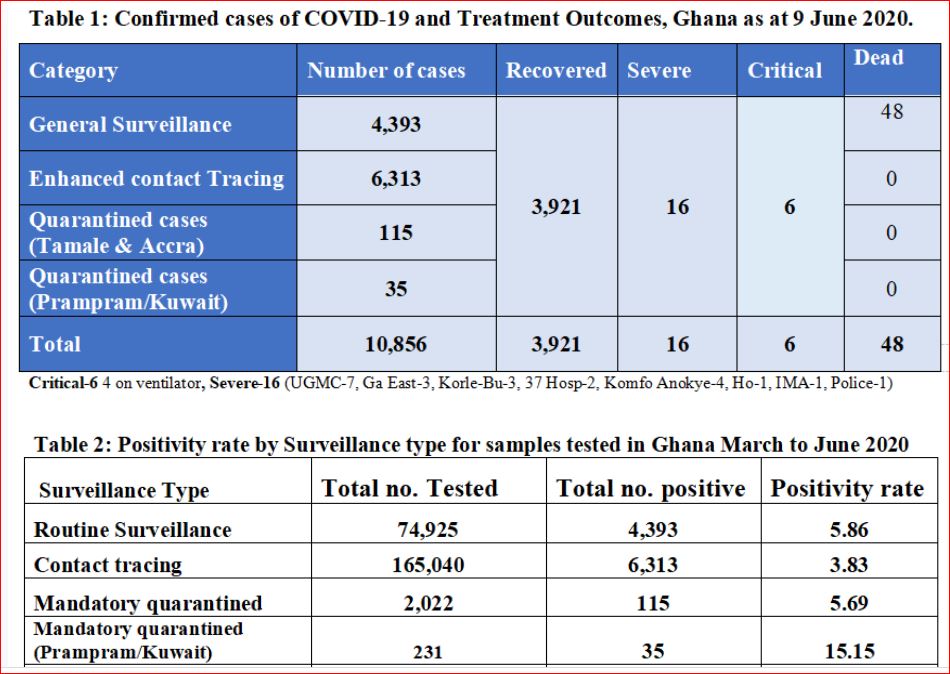 Greater Accra, the capital, leads the number of infections with a caseload of 6, 791.

Gender distribution shows 58% for male and 42% for female.

After Ghana survived the Ebola outbreak in 2013, many hoped, that like that one, the country would not have to record any case.

Despite the horrifying news about the pandemic in China and it’s fast-spread from Wuhan, where it was first detected, life was normal in the West African country.

Comparison between Ghana and the top countries with the most infections in Africa as of June 12.

Comparatively, Ghana has performed better than the regional average. When the whole of Africa reached 10, 000 cases, more than 500 people died.

South Africa has the highest number of cases on the continent with more than 58, 500 known cases and 1,284 deaths. The country’s National Institute for Communicable Diseases confirmed its first case on March 5.

The country became one of the earliest African countries to report cases.

Egypt was also the first country to record the contagion in Africa on February 14.

It took longer than South Africa to hit 10,000 cases. By May 12, approximately three months later, the North African country had surpassed 10,000 infections, with 544 deaths, and recoveries were 2,326.

On February 27, Nigeria confirmed its first case, the first in sub-Saharan Africa.

Nigeria also reached the 10, 000 mark about three months after it registered the pathogen.

Nigeria’s Centre for Disease Control reported a total of 10,162 infections as at May 31. At the same time, over 3,000 people were also discharged in the most populous country on the continent. The death toll was, at the time, 287.

Currently, Algeria has recorded 10,589 infections with 741 deaths. It places the country among the top five worst affected on the continent.

The club of top nine countries with deaths beyond 100 as of June 12 are:

This is significant because four of these countries have recorded more than 10,000 cases.