Suspects arrested for brutally attacking alleged witch to be arraigned

The six suspects who were arrested for brutally attacking a 50-year-old woman over witchcraft allegation will be arraigned today Monday, August 31, the Savannah Regional Police has said.

“They are all community members. There are two chiefs in that community. One being a Gonja chief who is the custodian of the land, and then there are these Dagomba settlers who are also in the community. They also have a chief. So, it was the Dagomba chief who was part of the group and at the moment with the police.

“We are putting things together so probably tomorrow, they will go to court. These people could do this to their fellow human being. As I told you, they attacked three women and caused harm to them,” PRO of the Savannah Regional Police Command, Agyekum Owusu told Accra-based Starr FM.

The six suspects include 58-year-old Chief of Sumpini, the area where the assault happened.

They were arrested on Sunday, August 30, a day after the community members raided the home of the victim.

All suspects are in police custody over their alleged involvement in the brutal attack on Maria Ibrahim.

They have been charged with causing harm, the police PRO revealed.

The community members inflicted cutlass wounds on Maria, leaving her with deep wounds on her head, hands, and a finger on her left arm almost chopped off.

But for some good Samaritans who intervened and rushed her to a post in Sumpini, she would have been killed just like 90-year-old, Mariama Akua Denteh, at Kafaba in the same region. 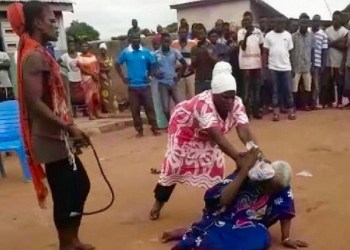 The country is yet to come to terms with the murder of the old woman less than two months ago and faced with another unlawful humiliation of another woman.

Maria was in the company of her children and sick husband when the attackers stormed her home shortly after the Bugum (fire) festival in the town at about 10pm.

She is currently at the Damongo Government Hospital where she is receiving treatment.

Narrating the incident, Maria said: “They entered my house, and said I was a witch with the intention of killing the sick person. One used a machete to hit my head and another slapped me and then I fell. They slashed me mercilessly on my hands, head, and other parts of my body”.

She continued: “They said six of us want to kill the sick boy and when they went to the homes of the others. They did not find them. However, I have not done anything, so I was just going about my activities at home when they pounced on me”.

Accused women who are lucky not be to physically harmed are banished to go and live in witch camps.