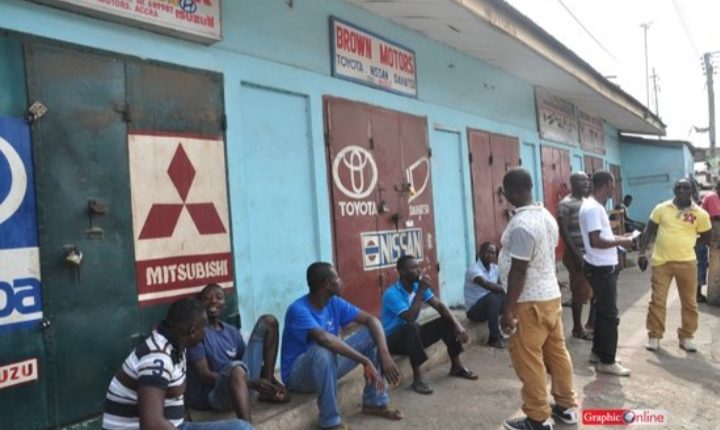 Tension at Suame as authorities lock up Nigerian shops

Fresh tension is brewing at the Suame Magazine Artisan hub in the Ashanti regional capital, Kumasi, as the government lock-up shops of Nigerian traders.

As at August 25, this year, a total of 41 shops belonging to Nigerians have been locked up by authorities of the Ghana Investment Promotion Centre (GIPC).

The action of the authority, the Nigerian traders argue, is totally unfair.

“I am telling you that they have made it very clear that the Ghanaian government don’t want we [Nigerians] here in Ghana again.

“We have followed all the proper registration laid down by the government. I can tell you about five or six shops that were locked up were all abiding by the rules.

“We follow that GIPC laws, pay taxes but then they still lock our shops. The majority of these shops have the required permits from Registrar General Department, Ghana Revenue Authority, resident permits and all, so why?” an angry trader said.

It is the second time in 10 months that Nigerian shops in the Kumasi trade enclave have been closed down. But this time it is officially sanctioned by the government, unlike the past when Ghana Union of Traders (GUTA) members closed the foreign-owned shops.

But according to them, this is a deliberate attempt to force them out of the country.

As part of tactics to get them out of the country, the Nigerians held that the government is making the resident renewal permit process difficult.

“Since November, last year till now we are finding it difficult to renew our resident permit. Whenever you send your passport to the office and they see you are a Nigerian, they just leave it there.

“Regardless of the fact that you have paid them money or not, they just leave the passport unattended to. It been over five months now,” the trader indicated in a Luv FM interview monitored by theghanareport.com.

But a member of the committee on foreigners of retail trade under the trade ministry has explained that the Nigerian traders have failed to abide by the trade laws.

Nana Kwabena Peprah said the authority is simply enforcing the laws governing the activities of foreigners in the country.

“What we are doing is that we have investments laws in this country which is the GIPC laws and it spells out how a foreigner can apply and be doing trade in Ghana.

“The laws also gives how a Ghanaian can also trade, so we are simply enforcing the laws,” he stated.

However, the Nigerian authorities see the development as an affront to ECOWAS protocol on the movement of free goods and services as well as cross-boundary trade between member states.

The trade scuffle between Nigerians and Ghanaians has become a constant struggle between traders of the two countries.

Over 600 foreign-owned shops at the Kwame Nkrumah Circle were locked up by some members of the Ghana Union of Traders (GUTA), in December 2019.

According to the association, the traders failed to produce their business operating permits.

In July, this year, some members of the Association (GUTA) clashed with Nigerian traders operating illegally at the Kwame Nkrumah Circle.

The traders closed down the shops of their Ghanaian counterparts for what they described as the  “infiltration of foreigners into Ghana’s retail business.”

Meanwhile, the Nigerian government has given indications that it may head to the ECOWAS Court for redress or throw out Ghanaian traders from Nigerian markets.