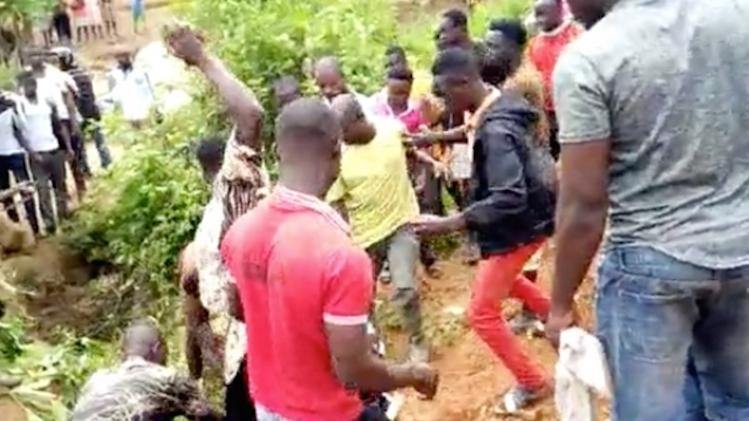 One of the fourteen accused persons has explained his role in how the late Major Maxwell Adam Mahama was lynched.

Bismarck Abanga said he threw a “dried cocoa pod” at the Late Major Mahama, who was chased, beaten and lynched at Denkyira Obuasi in 2017.

Although other residents used blocks, sticks and stones to kill the late Mahama, Abanga said he only threw it once and left the scene immediately after missing.

Chief Inspector Agyakwa catalogued the accused person’s account of what happened on the said day the military officer was lynched.

“I am an electronic technician at Denkyira. On May 29, 2017, I was in the house working on a television set when I heard some loud noise. I wanted to go, but my wife advised me not to.

“My apprentice named Kwaku Adusah went to town and came back tell us (Referring to Abanga and his wife) the town people had arrested an armed robber.

“I went to the roadside and saw a young man being beaten. I followed them till they got to the building, I went close and picked a dried cocoa pod and threw it, but it did not hit him.

The accused person, Abanga, wrote the statement on November 14, 2017. The Accra High Court has accepted the statement and marked it as exhibit T.

Anima, in his statement, said he was trimming his hair when he heard shouts of “armed robber, armed robber”.

As the robbery chants continued, Anima and his friend, one Abu, headed in the direction where the residents had gathered.

The investigator said before the duo could get to the scene, one Fico said, “They have killed him”, which made the two ran to the crime spot.

“Finally, Abu and I got to the scene and lying there was a man in his thirties (Major Mahama) but still breathing. He was in jeans trousers. I removed the jeans to his knee level, but Akwesi Buasi pushed me from there.

“I saw Abortion, Sakora man, Kwame and others I cannot remember. There were about 200 people there, his head was smashed, and blood was all over,” the police read Anima’s account.

In his statement, a former assemblyman for Denkyira Obuasi, William Baah, said he received a call in the morning from one Maame Bono about a man wielding a gun.

Since he was the assemblyman for the area, the investigator said, he decided to go in search of the said man.

“I called a motor rider called Komoko to take me there. We met the man (Referring to Major Mahama), and when he realised that we were approaching him, he removed a gun and pointed it at us, so we got scared and went to report at the police station,” the former assemblyman said.

According to them, the accused persons did not voluntarily give their testimonies, they were deceived by the police, to sign the caution statements.

Fourteen people, including William Baah, a former Assembly Member for Denkyira Obuasi, are standing trial in connection with the death of the military officer.

They have all pleaded not guilty to charges ranging from murder, abetment to murder and conspiracy to commit murder.

At the dawn of that day, then Captain Mahama went on his usual jogging.

On the way, it is reported that he came across two women who assumed he was an armed robber because he had a gun tucked at the back of his trousers.

Multiple sources said the women called the assemblyman and informed him that they had seen a man with a gun and were convinced that he was an armed robber.

The Assemblyman then called two associates and headed to the area where the soldier was seen jogging.

According to him, upon reaching the venue, the soldier opened fire on them, and he absconded.

The assemblyman said he proceeded to the police station to report the incident, but by the time the police arrived at the scene, the military man had been lynched.

The ex-soldier had his head smashed with bricks and other objects.

A day after his death, armed military officers were dispatched to the area.

This sent residents fleeing from the town for fear of being attacked by the military.

About 120 residents were picked up for their involvement in the incident.