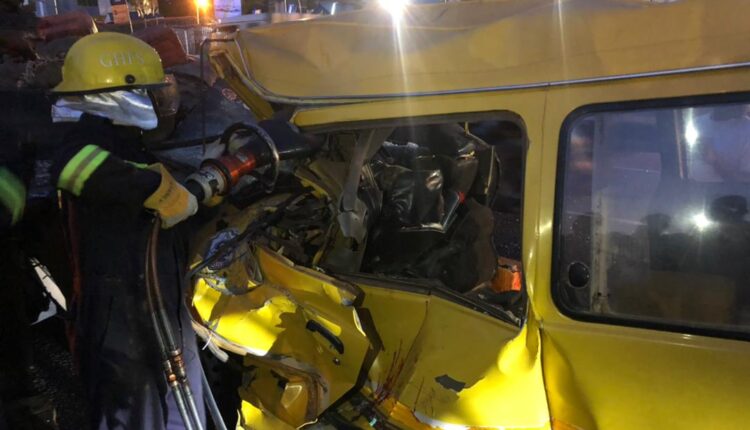 Two people are feared dead in a car crash on the Circle-Achimota Highway close to the Tesano police station.

The accident occurred after a commercial vehicle (trotro) rammed into a faulty trailer parked in the middle of the road at about 4:30 am on Wednesday, April 14.

The trotro driver, on top speed, could not see the stationary truck, which carries a Togolese number plate, resulting in the crash.

Three days prior to the incident, five people died on the spot after an accident at Obretema in the Suhum Municipality involving a Mercedes Sprinter Bus.

According to the police, one of the car tyres burst causing the driver, 35-year-old Eric Ohemang, to lose control.

A total of 771 persons have died through road accidents for the first quarter of 2021.

This surpassed the COVID-19 related deaths of 752 at the end of the same period.

The figure, according to the Ghana Police Service is a significant increase in the 393 cases recorded in the same period 2020.

Out of the 771 deaths recorded, the Ashanti region recorded the highest with 171 deaths with 1,064 injured followed by the Greater Accra region, 146 deaths, and 732 injuries.

Central, Savannah, Bono, and Upper East regions respectively follow in terms of the number of casualties while the North East Region recorded only 3 deaths.

If the data from the Motor Traffic and Transport Department (MTTD) is finalised by the National Road Safety Authority (NRSA), the 2020 deaths would be the highest in the last three decades.