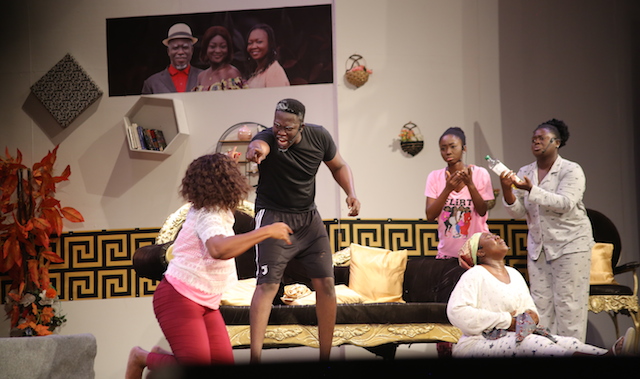 To say renowned playwright, Uncle Ebo Whyte and his Roverman Productions team always thrill patrons at his plays is an understatement and he did it again on Saturday, September 4, when he hosted his play Devil’s Wife at the National Theatre.

At exactly 4 p.m., the curtains were raised for the start of what was a series of rib-racking treats for the almost fully packed auditorium.

In the first few minutes, the plot of the play was a bit confusing but eventually, it started unfolding beautifully and patrons had no choice than to show appreciation for what was being served them with cheers, laughter and the occasional thunderous applause.

Devil’s Wife is a story about Zoe played by Daniella Asare-Adu, a young and successful lad from a wealthy background. She is also a successful career young lady.

Despite everything working well for her, Zoe goes through setbacks in her marriage. Three times, she suffers the pain of losing her husbands on her wedding nights.

With the painful and traumatic experiences, she vows not to marry again to save the lives of her suitors but the decision is put to test when Rev Kweku Kom played by Andrew Bulley Jnr, a new pastor of her church staying with her parents falls in love with her.

Rev Kom’s intention to marry Zoe doesn’t sit well with the latter’s parents and even more, the leadership of the church who vow to deal ruthlessly with Zoe’s parents should anything happen to their pastor.

Inspite of all the disapprovals, Rev Kom gambles with his life and marries Zoe to prove that he serves a powerful God when he survives the wedding night.

Some of the cast in the play are Spirit played by Joseph Awotwe-Jonah, Esi;Ernestina Twumasi Awuah, Mr Bedu;Andrew Adote, with Alison Asihene playing Mrs Kom.

As a christian, Uncle Ebo Whyte has never shied away from projecting his christian beliefs as well as tackling very topical issues in his plays.

In Devil’s Wife, the award winning dramatist deals with the subject of “spiritual marriages” and evil altars that ruin people’s lives.

All the characters interprete their roles well with Araba and Esi, the two maidservants of Zoe’s parents creating exciting moments with their clowning.

One cannot lose sight of the poor faith and belief of some Christians in the power of God to save them from the claws of the devil as portrayed by Zoe’s parents and leadership of the church in finding a solution to Zoe’s marital problems.

Some patrons who spoke to the Graphic Showbiz after the play, mentioned that the drama will be a good reference in handling similar situations they were going through.

According to Robert Asamoah, though he was not going through marriage challenges, the play opened his eyes to be prayerful and use that as a weapon to deliver himself from his battles.

“What I just watched is like God speaking to me on what I should do to overcome my present situation. I learnt a lot from Rev Kom’s character of testing the power and faithfulness of God.

“He put the power of God to test through incessant prayers and had his heart desires granted by saving himself and getting the chance to stay married to the love of his life,” he said.

There will be an encore of Devil’s Wife at same times on Saturday, September 11 and September 12 at 4pm and 8pm.