The immediate past Deputy Education Minister, Samuel Okudzeto Ablakwa, has said the funding of an MP’s capacity building at Harvard University in the US flouted the law.

Mr. Ablakwa, who served four years as a Deputy Minister, quoted the GETFUND law which stated that the fund could “support other educational activities and programmes for the promotion of education as the Minister in consultation with the Board may determine.”

Matthew Opoku Prempeh, who is the Manhyia South MP, got $24,000 in funding to study “National and International Security” at Harvard University.

Ghanaians have reacted angrily following media publications, serialising the Auditor-General’s report on the GETFUND from 2012 to 2018.

The Auditor-General, in the report, has slammed the GETFUND for “unlawfully’ dishing out more than $4.7million in scholarship to persons who are not anything close to needy students in the country.

In the case of Matthew Opoku Prempeh, his sponsorship was a three-week programme in 2014. Several other MPs and politicians are among a list of 86 beneficiaries as detailed in the Auditor-General’s performance audit report.

Matthew Opoku Prempeh, who is now the Minister of Education, has reacted to the GETFUND scandal, explaining that he got the funding as an MP and not as a minister which would have raised questions of abuse of office.

The GETFUND has also explained the scholarships were not administered to only brilliant but needy students as many believe. A statement said the law allowed the GETFUND to support educational programmes to “serve strategic national interests.” 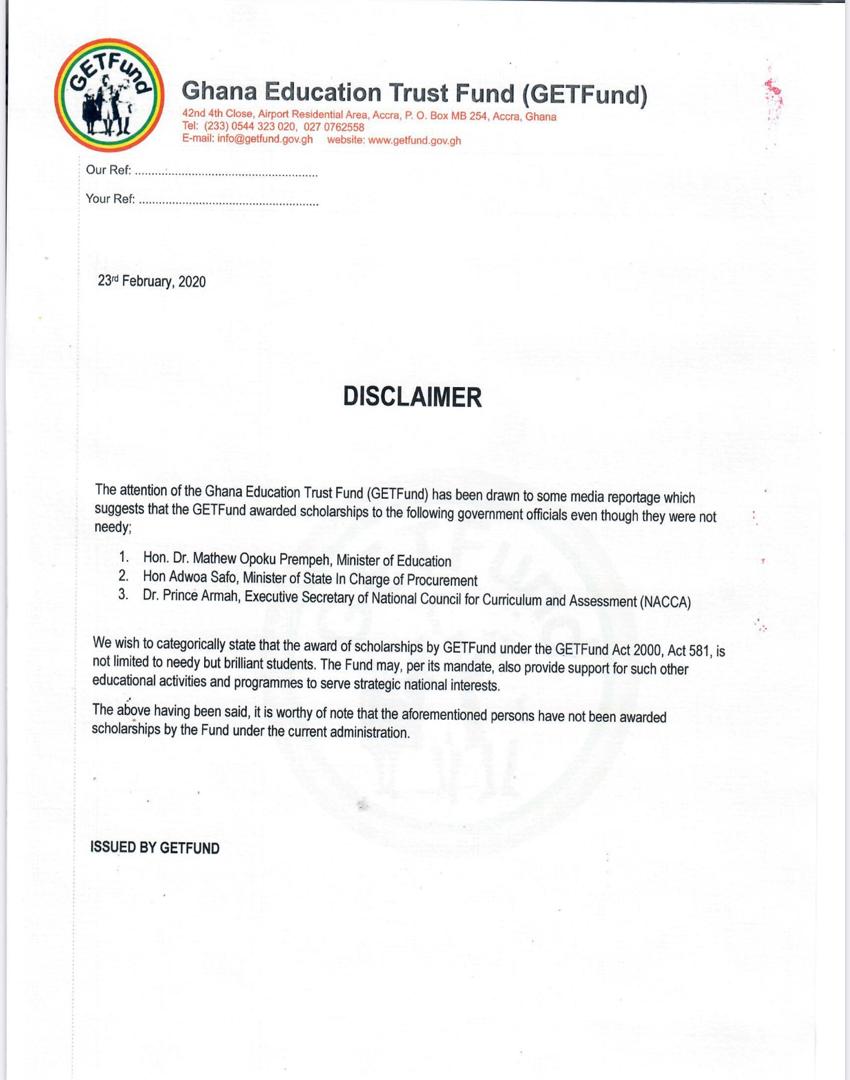 But Okudzeto Ablakwa, who is North Tongu MP, has criticised the statement saying “there is an attempt to justify what has happened.”

Speaking to JoyNews’ Gifty Andoh-Appiah, host of The Pulse, he condemned the “grabbing of opportunities” by politicians while the ordinary Ghanaian suffers to pay for education.

He said Section of the law quoted by the Education ministry showed clearly that some type of funding required the education minister’s approval.

“There was no ministerial approval….at no point did these requests come to us for approval,” he insisted and faulted the GETFUND administrator for approving programmes outside the country without involving the education ministry.

Mr. Ablakwa also admitted that the ministry under the Mahama government did not exercise proper oversight over GETFUND.

“If we knew that this is what was going on…we would have been more probing,” he said and observed that “GETFUND decided to grant final approval and virtually did everything on their own.”

He described the granting to scholarships to MPs, politicians and politically connected persons as “unethical”, “totally unconscionable” and “morally reprehensible.”

He called on the Auditor-General to issue surcharges to officials implicated in its performance audit report on the GETFUND.