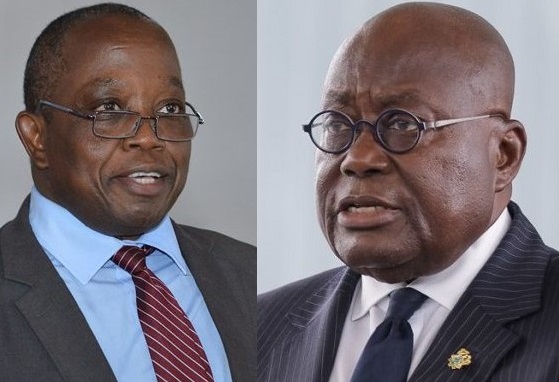 President Akufo-Addo has stated that his administration did not force out former Auditor-General Daniel Domelovo.

He pointed out that the anti-corruption campaigner was caught up on the mandatory retirement age for public officers.

Mr Domelvo was asked to retire a day after he resumed work following the expiration of a forced leave directed by the Presidency.

Responding to a question on the development in an interview with US-based CNN, President Akufo-Addo maintained that Mr Domelevo retired based on law.

“The Auditor-General, like me, should be some of the first to recognize the laws in our country. There’s a time for retiring which is prescribed by statute, not my making,” he explained. “If you are 60 years old, you are no longer supposed to be able to work in the public service”.

What happened to Domelevo?

This came less than 16 hours after he returned from a 167-day accumulated leave.

The directive, according to a statement signed by Secretary to the President, Nana Asante Bediatuo, stems from an indication by the Audit Service Board that Mr Domelevo has exceeded the eligible age to remain in the workforce.

“The attention of the President of the Republic has been drawn to records and documents made available to this Office by the Audit Service, that indicate that your date of birth is 1st June 1960 and that in accordance with article 199 (1) of the Constitution, your date of retirement as Auditor-General was 1st June 2020.”

The statement explained that “based on this information, the President is of the view that you have formally left office.”

Essentially, Johnson Akuamoa-Asiedu will continue to act in Mr Domelevo’s stead until a substantive appointment is made.

“The President thanks you for your service to the nation and wishes you the very best in your future endeavours,” the March 3 statement concluded.

In 2018, Mr Domelevo surcharged the then Senior Minister, Osafo-Maafo, for superintending over the payment of some $1 million to Kroll Associates by the Ministry of Finance.

According to Mr Domelevo, there was no evidence of work done by the UK-based firm, yet the Finance Ministry paid money.

The AG, therefore, surcharged Senior Minister Osafo-Maafo and four other officials of the Finance Ministry.

But the Senior Minister denied the allegations.

After rejecting the explanation by Osafo-Maafo, the Auditor-General Daniel Domelevo revealed on Joy FM’s Super Morning Show that the Senior Minister has 60 days to go to court to seek an order setting aside his surcharge.

In December 2019, the Senior Minister moved to challenge the $1million surcharge against him.

He filed an application on the same matter at the Supreme Court.

Counsel for the five appellants, Mr Yaw Oppong, argued that the Auditor-General acted “unreasonably, capriciously, maliciously and in blatant violation of his duty as a public officer”.

He maintained that the Auditor-General failed to inspect certain documents which held evidence of work done provided by Mr Osafo-Maafo before the surcharge.

But while the case was in court, Mr Domelevo was asked by President Nana Akufo-Addo to proceed on leave.

Mr Domelevo’s deputy, Johnson Akuamoah Asiedu, was asked to take up the position of Acting Auditor-General.

He, therefore, led the inspection of the documents as directed by the Supreme Court and expressed satisfaction.

When Mr Domelevo raised concerns about the leave, the Presidency extended the days from 123 to 167

A week after that, the Auditor-General was astonished to discover that the locks to his office had been changed when he went by to pick up some documents.

But on March 3, the Auditor-General returned to work after his 167 days mandatory leave.

However, by 9 pm that same day, he received a letter from the Presidency asking him to retire.

What else did Akufo-Addo say in the interview?

President Akufo-Addo scored his administration high marks on fighting corruption since he came to office.

“Am I satisfied that we’ve been effective? I will say yes. A lot has been done, and it is reflected in Ghana’s growing position and rankings of corruption in the world. We’ve gone up several notches since I came into office because we are dealing with these matters at the basic level,” he said.

According to him, his government has provided the need tools for anti-corruption institutions to be effective.

“For the anti-corruption institutions of our country, when I came into office, [they] were very poorly resourced. We can talk all we like about corruption and make all the wonderful statements, but if the instruments at your disposal for dealing with it are weak and blunt, you will get no result,” he said.