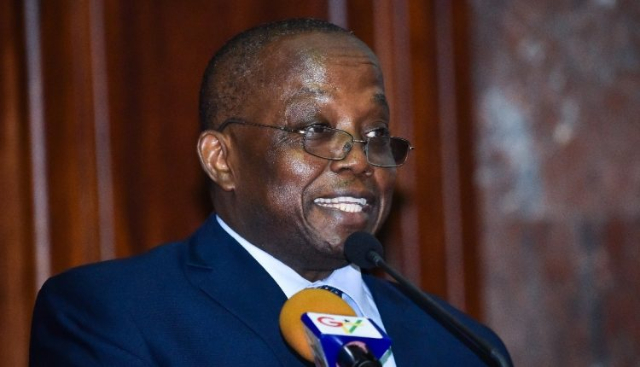 The Auditor-General, Daniel Domelevo, whose anti-corruption work is believed to have sorely irked persons in the governing New Patriotic Party, says he is prepared for the worst.

Speaking to auditors at a conference in the Volta regional capital, Ho, the Auditor-General said he had heard threats of being made to suffer the same fate as Charlotte Osei, who was removed from her Electoral Commission post in 2018.

“Who says I care? I don’t care. Life doesn’t end here,” he said and revealed his professional options.

“My father has a lot of farmlands. I will go and farm.”

The NPP, which felt the exiting president should have allowed his successor to make that appointment criticised Daniel Domelevo’s appointment in the dying days of the John Mahama government.

But the choice of Mr Domelevo has proved to be an inspiring appointment, as he has earned accolades in his fight against corruption.

Named the 2019 Integrity Personality of the Year, he has injected some bite in the work of the Audit Service formerly seen as toothless.

One of the people who criticised his appointment, Yaw Osafo-Maafo, has been surcharged $1m by the Auditor-General for unlawfully contracting a UK-based consultancy on behalf of the government.

But fresh criticisms have come his way after the Auditor-General’s department published a performance audit report into the GETFund Secretariat.

The “very disturbing” report has revealed scholarships meant for the needy, but brilliant students went to political cronies.

A Deputy Agriculture Minister, Kennedy Osei Nyarko, who has been named in the list charged at the Auditor-General, insisting he never applied for any scholarship.

But the Auditor-General has said the fingers should be pointed at the GETFUND Secretariat, which provided the names.

Daniel Domelevo’s viral comment, ‘if you fight corruption, corruption will fight you back’ earned him praise from the Danish Ambassador.

But inside the government, it has drawn out some daggers.

But Daniel Domelevo has likened himself to Jesus Christ, who was killed by the Jews despite his many good works.

“When I think about him, I feel happy because this is somebody who goes and heals, [someone] whom you should be clapping for. They are accusing him. He does good and people are attacking him,” he said. “That is how it should be for auditors,” he added.

Mr. Domelevo charged his colleague auditors to be courageous in the face of attacks

“When they are praising you so much, then you are a bad auditor.

“Nobody will kill you. You may lose your job. You may be transferred, that is not the end of life,” he said.

He said it was a sign of being a bad auditor if everyone praised the professional’s work.

The Majority Leader, Osei Kyei-Mensah Bonsu, is among leading NPP stalwarts who had, in the past, questioned the Auditor-General’s motives.

He had said Daniel Domelevo often rushes to publish audits report on the Auditor-General’s website even before submitting it to Parliament.

He said the report must first to come to Parliament, which had the constitutional mandate to scrutinise it before it was published on the Audit Service website.

The Majority Leader and Suame MP claimed sometimes Parliament found mistakes in the A-G’s report and explained that before the AG could make the corrections, the affected persons in the report would have been vilified already.